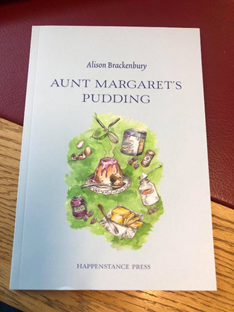 Hello! I’m Leah Watson, a postgraduate student at the University of Manchester studying MA History. I have recently completed a placement at the John Rylands Library, where I was assigned the tasks of creating a box-list catalogue of the papers of Alison Brackenbury as well as a blog post about the catalogue and my experience of completing the placement with my colleague, Paige Johnston.

Background:
Alison Brackenbury was born in Gainsborough, Lincolnshire in 1953 and is a descendant of generations of skilled, prize-winning shepherds. Throughout her poetry career, she has published nine collections with Carcanet, and has won the Eric Gregory Award and a Cholmondeley Award. Her collection Skies (2016) was chosen by The Observer as one of its Poetry Books of the Year. Alison has also published Aunt Margret’s Pudding (2018) with HappenStance Publications.

Inspiration:
Whilst cataloguing her work, I discovered she has many inspirations including, but not limited to: time, history, horses, nature, and, of course, her family.
The Alison Brackenbury Papers were donated to the Library in 2018 and include an overview of her work from University in the 1970s to the present day. However, as I was cataloguing her work, one collection of poems struck me the most: Aunt Margaret’s Pudding.

Aunt Margaret’s Pudding was inspired by her grandmother, Dorothy Elizabeth Barnes and her recipe book. She was a cook, who was born on 28th November 1894. The recipe book contained 13 pudding and 33 cake recipes, including: Treacle Sponge Pudding, Lemon Pudding, and Flamberries Pudding. Clearly, she had an eye for the sweet stuff! But what struck me most was how Alison reinvent her grandmothers’ recipes through poems.

For example, her grandmother’s recipe for Aunt Margaret’s Pudding, includes:
½ lb flour, 3 oz lard or butter, ¼ lb sugar, 1 teaspoon B.P., mix with one egg and a little milk. Put a layer of jam at bottom of basin Steam 1½ hrs.

Dot took for granted custard seas,
in which all puddings swam –
yellow as straw, farmworkers’ food.
In frost, the men tramped home.
Moon glittered. No one knew how lard
would line and leave their arteries hard.

When I came home and you worked late,
our workshop gloomed with cold,
I bought flour from the corner shop
sacked cupboards for old bowls.
Softly the mixture dropped. I too
spooned Margaret’s hot jam sponge for you.

This collection of poems illuminates Alison’s strong grandmother-granddaughter relationship as well as her creativity in adapting and presenting her grandmother’s recipes in an artistic way as this also doubles as a recipe book, where she details the steps, equipment and methods needed to make each delight. This is what inspired me the most as the collection presents poetry in an exciting, heart-warming, relatable way, whilst paying tribute to her grandmother’s past and showcasing the creativity of both women.

This placement was an exciting opportunity as it allowed me to experience working with others in such a world-leading centre of learning. I have not only gained creative skills, but also organisational and self-managerial skills as this placement was mostly independent work. I thoroughly enjoyed my time at the John Rylands Library, and would recommend this placement to a wide range of students, especially history students like myself, as you gain a rich understanding of how archival catalogues work which will benefit future research.

0 comments on “Recipes, Cakes and Puddings: Box listing the Work of Alison Brackenbury”