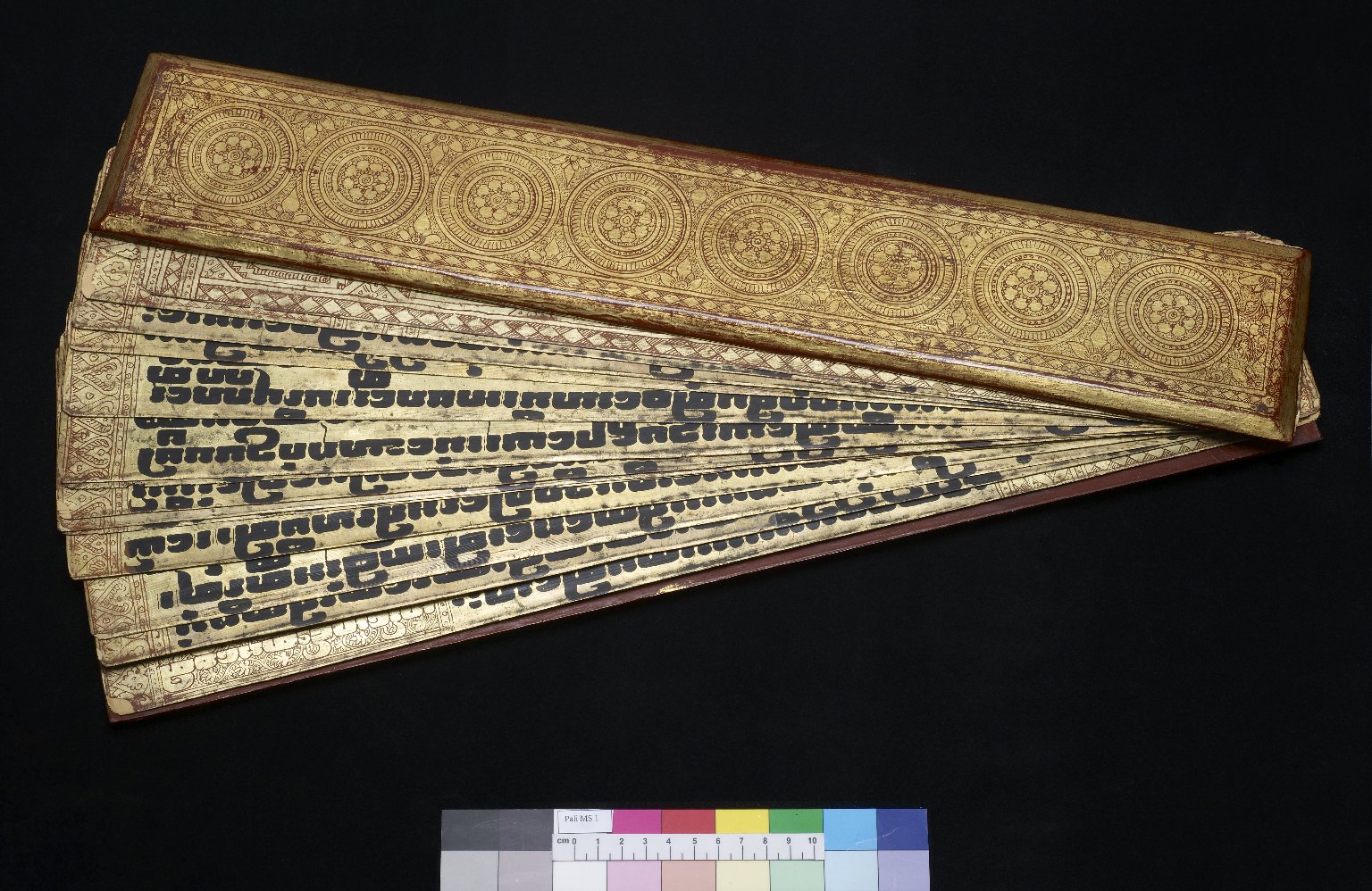 Inscribing onto dried palm leaves was practiced for thousands of years in South and South East Asia and is one of the oldest forms of writing. Palm leaf manuscripts were widely produced in Thailand, Sri Lanka, Myanmar/Burma, India, Malaysia and Indonesia until paper slowly began to replace it, with further decline after the 19th -20th century boom of the printing press. The manuscripts contain a wide range of subjects such as medicine, astrology, laws, music and literature, but are also sacred and devotional objects used to record and pass on Buddhist sutras, illustrations and illuminations.

The Collection Care Department protects palm leaf manuscripts by storing them in a climate controlled environment and acid-free enclosures. We also respect the signs of wear, dirt and staining from oil and candles as evidence of their historical use in religious ritual in South Asian temples, monasteries and homes. As Conservators, we intervene as minimally as possible to make manuscripts safe for handling, exhibition, digitisation and research access; while preserving their intangible value as sacred Buddhist objects.

Acquired by the John Rylands Library in 1915 from Professor T W Rhys Davis, the Pali collection consists of 83 items mainly on palm leaf, but also paper and lacquer, dating from the 17th-19th centuries. 55 items derive from Sri Lanka and are in Sinhalese script, with 28 from Myanmar/Burma and 3 items of Cambodian origin.

The collection features the common structure of palm leaf manuscripts: flat palm leaf folios are grouped in bundles and held between boards or panels made of wood, which are the covers. The leaves are strung together by a cord through two bored holes near the top centre of the leaf. The cord may be wrapped around the boards to hold the manuscript together.

Palm leaf has a unique materiality that lends itself as a writing support for Buddhist texts. Palm leaf is a generic term used to describe a variety of palm species from the Arecaceae family. The two most commonly used for manuscripts are the borassus flabellifer (palmyra leaf) and the corypha umbraculifera (talipot palm). Most commonly used in Sri Lankan manuscripts, the local term for talipot palm is the ‘ola leaf’. Growing up to heights of seventy feet, this giant palm is common to Sri Lanka, India, Thailand and Western Myanmar/Burma. The broad, long, flexible and smooth surface of the talipot palm makes it an ideal writing support that appears a light cream in colour. Palmyra leaf is narrower, shorter, thicker and darker brown with a waxier surface less able to absorb ink written on the surface.

Palm leaf manuscripts enable us to preserve evidence of the traditional craft used by South Asian peoples in their production. The palm leaflets are separated and the midribs cut off, then they are boiled, heated and coated in essential oils, with variations depending on the region. In Sri Lanka, the leaves are boiled, washed and aired, before smoking and burnishing them. In India, the leaves undergo the same boiling process but are covered in pond mud and then rubbed with oils and spices such as turmeric. Kilns are used in Thailand to heat the leaves encouraging a black fluid to seep out, before being wiped, reheated and rubbed with an oiled cloth.

In the Pali Collection we can find two forms of writing styles: incising and surface writing.  Traditionally, a skilful scribe would incise by holding the palm leaf in one hand and using a sharp metal stylus in the other, mark characters and illustrations into the leaf. The incised lines are then inked using natural plant juices or carbon black mixed with a variety of binders such as dummala oil used commonly in Sri Lanka, gum arabic and wood oil. In Thai manuscripts it is common to find red ink, indigo and vermillion (Anupam, 2002).

This careful incision can also be seen in the Cambodian script of Pali MS 82. Between its elaborate covers of inlaid mother-of-pearl and decorative panels, are seven palm leaf bundles containing the Tripitaka or ‘Three Baskets’, the earliest most complete canon of Buddhist text said to preserve the word of the Buddha. It consists of the three pitakas or collection of scriptures: Vinaya Piṭaka (Basket of Discipline), Sūtra Piṭaka (Basket of Discourse), and Abhidharma Piṭaka (Basket of Special [or Further] Doctrine). There are many versions of the Tripitaka between schools of Buddhism, with the oldest being of the Theravada Buddhist tradition first recorded in Pali language, known as the Pali Canon.

The second form of palm leaf writing: surface writing, is visible on some of the Burmese manuscripts in the Pali Collection such as Pali MS 1. Surface writing is traditionally done with a reed pen, also using carbon black and a binder. Although the oiled, smooth surface of palm leaf allows the flow of ink on the surface, it also prevents ink from penetrating or staining the leaf. This, coupled with abrasion from other folios in the stack and mechanical stress of turning the leaves, leads to surface text becoming very faint over time as seen in some of the collection’s Burmese manuscripts.

Palm leaf manuscripts, especially those on palmyra leaf, tend to loose flexibility; becoming brittle and browning as they age. This is due to deterioration of the leaf structure and loss of oils over time, dehydration of the leaf, and storage in a dry environment or climate. It is also common to find wear around the edges of the leaf, to the covers and cord, sometimes loss of the original cord and covers, which may lead to historical dislocation or disordering. Fortunately most of the Pali Collection is in stable condition. The sacred leaves continuing to preserve Buddhist traditions and the care and skill of those who made them.