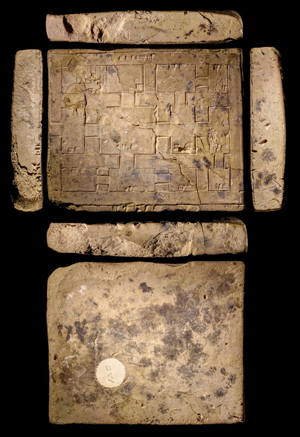 This floor plan, made in Sumeria in the Ur III period (circa 2100-2000 BC), is currently on display in the “Before the Flood” exhibition at the CaixaForum in Barcelona. It has been digitised and made available on the Cuneiform Digital Library Initiative website (see post Digitisation of Ancient Cuneiform Texts).

The tablet bears no inscription to identify the owner of the building or its function, but it was probably a building within a temple complex.Few Sumerian building plans have survived in such complete condition. There may have been a custom of destroying the plans once a building was complete, or plans may have been more usually drawn on an ephemeral material such as wax tablet. It does not appear that such plans were reserved for special buildings, as most have fairly simple layouts. A plan such as this would have been useful for calculating the quantity of bricks needed to complete the construction. Clay or mud bricks were the most common building material of the period and would have been moulded and sun-baked for each construction. Similarly this plan was made out of clay (a common writing material), inscribed with a wedge shaped tool (from which the word “cuneiform” is derived), and hardened in the sun.

The plan is roughly to scale and gives nineteen measurements, which are given in terms of KÙŠ (a cubit of about 50 centimetres) and GAR (about 6 metres). The building itself would have been approximately 22 by 16 metres, a fairly substantial property. The walls of the building were probably about 150 centimetres thick, which may have enabled the building to support a second storey and provided insulation against extreme heat and cold. There is a doorway on the left wall, and the rectangles in the upper left-hand room probably indicate stairs. The layout is very regular and does not appear to be restricted by other buildings encroaching on the plot, which suggests the building was in the precinct of a temple or palace. The central room may have been a courtyard or acted as an ante-chamber within a shrine or small temple.

Before we lent the plan to Spain we had to ensure that it would be safe to travel and be on display. We noticed that there were two substantial cracks running across the friable surface of this fragile plan. A specialist object conservator at our sister institution, the Manchester Museum, carefully applied 5% PVAlc and plaster/pigment to stabilise and consolidate the tablet.