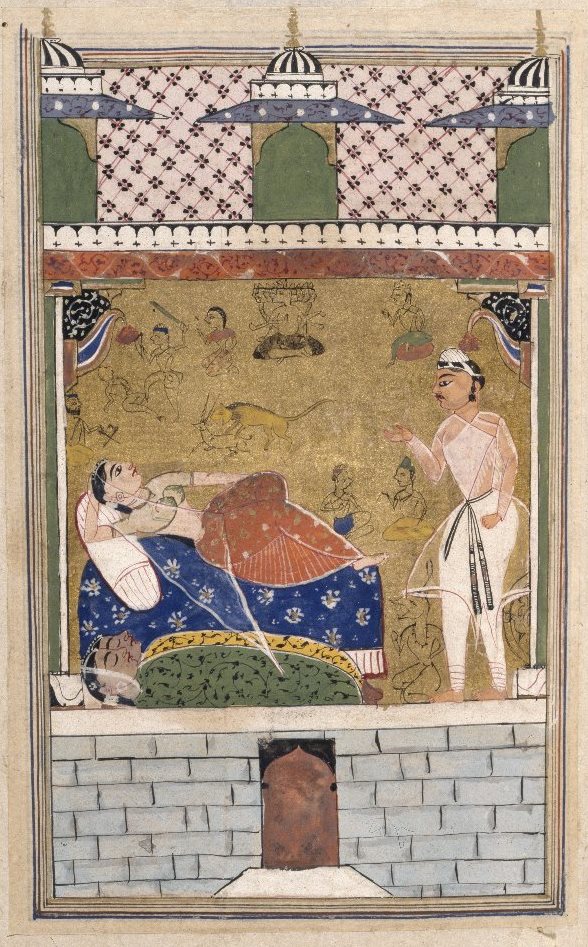 Hindustani MS 1 has been digitised and is now available to view online in the Rylands Collection.

This sixteenth-century copy of the Laur-Chand by Maulana Daud is one of the Library’s most beautiful and important manuscripts.

Dr Jacqueline Suthren Hirst has kindly provided an introduction to the story and to our manuscript.

Maulana Daud, a Sufi poet from Dalmau (modern Uttar Pradesh, India), composed his narrative of the hero, Laurak, and his beloved, Chanda, around 1377-78 A.D.  Drawing on a popular north Indian regional folktale, which still circulates in vibrant performative traditions today, Daud used the language of Avadhi (or Hindavi) to compose the first surviving Indian Sufi romance, a model for later poets.  Avadhi was both a courtly literary language and a vernacular; Daud used Persian masnavi conventions, such as opening verses in praise of Allah, the Prophet Muhammad and his four Companions, his patron and his own pir (Sufi teacher), alongside Indian images and settings, to create an Indo-Islamic story with wide appeal.The story tells of the mutual love of Laur (Lorik/Laurak), already married to Maina, and the beautiful Chand (or Chanda), separated from an unsuccessful childhood marriage.  Brought together through the mediation of Chanda’s nanny, they run away together and face many trials, including Chanda’s near-fatal snakebites, the result of a curse. Eventually, they return to Maina, but the end of the story is unknown, none of the five surviving manuscripts being complete.  Chanda’s beauty draws Laurak, the Sufi seeker, to God’s beauty; his ‘death’ to nafs, the ego-self, as she ‘dies’ at the second bite, hints at fana’, the annihilation of the seeker in God’s being alone.

Laurak has just scaled the wall to Chanda’s bedchamber, before they have actually met. He gazes on her beauty as she sleeps, her female companions failing to wake and guard her as they should. The verses opposite describe the gorgeous wall-hangings: the ten-headed demon Ravana, the capture of Sita, Rama preparing for battle, from the epic of Rama and Sita; the story of the Pandavas, from the Mahabharata, the other great Indian epic; lions and deer – all delicately etched on the walls ‘the colour of aloewood’, gold-leafed in the painting.  In a moment, Laurak will wake Chanda, and the passion of their romance will begin…

The Manchester Chandayan is the most extensive extant manuscript, despite lacking beginning, end and some middle pages. A clever use of picture series draws readers into the story, immersing them in an experience which hints at emotions and unfolding action, creates suspense and engages them at the pace of the narrated tale.  While previously the Manchester manuscript was seen as an inferior version of a common lost original better reproduced by the Mumbai Chandayan (Losty), Adamjee has now convincingly argued for its subtle independent narrative strategies intertwining paint and word. The 286 minatures are characteristed by a pastel palette, minimal underdrawing, infilling patterns drawn from fabric design, and extensive gold leaf. The text pages show a Persian section-caption in red ink, above five verses in chaupai rhyming couplets in two columns, with the final verse of each section, in longer doha metre, at the bottom of the page, all written in naskh script.

Manuscript history: Formerly part of the collection of the Persian scholar Nathaniel Bland (1803-1865). Bland’s oriental manuscripts were sold through Bernard Quaritch in 1866 to Alexander Lindsay, 25th Earl of Crawford. The Crawford manuscript collection was purchased in 1901 by Enriqueta Rylands, founder of the John Rylands Library.

6 comments on “The Laur-Chand: an Indian Sufi romance”