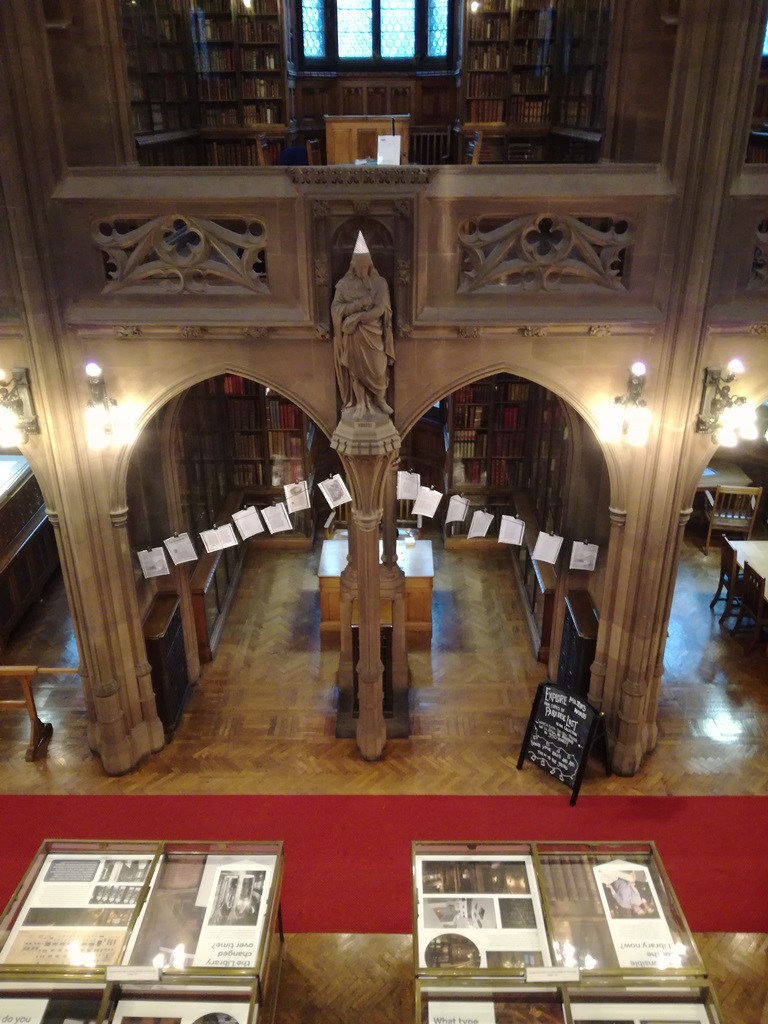 On 9 December 2017, the Library celebrated 350 years of Paradise Lost, on the birthday of the poem’s author, John Milton.

The events included talks from University of Manchester academics, projections of illustrations to Paradise Lost from the Library’s collections, and an intervention in the activity alcove that included information about editions of Paradise Lost in the collections and an invitation for visitors to nominate the book that they thought should still be read 350 years from now.

Although one visitor predicted that “There will be no books in 350 years”, we had over 100 more optimistic responses, nominating works that spanned thousands of years and from across the globe.

By some distance, the most popular choice was Harry Potter, nominated eighteen times (only one of which specified an individual book in the series – The Philosopher’s Stone). The Bible clocked in second, with eleven nominations (one of which specified the Book of Genesis “because it’s the beginning of so many things”), followed by Cervantes’ El Quijote, with five. There were also five nominations for Tolkein’s writings (The Hobbit and The Lord of the Rings), and four for Roald Dahl stories.

There were also a number of non-fiction suggestions, including the works of Charles Darwin, Adam Smith’s The Wealth of Nations and Karl Marx’s Das Kapital.

Some visitors included a reason for their suggestion. The Bible, The Lord of the Rings and Shakespeare’s plays were all described as “timeless”; similarly, another visitor nominated “any poetry, because it will always be relatable” and various answers valued the presentation of human nature in the nominated books.

Among the more memorable responses were: “Alice in Wonderland – because time may present it as historical fact”, “Sjon’s The Blue Fox – because we will always need time to dwell in this strange world of foxes, magic and snow” and “Gone With the Wind – because Scarlett O’Hara is a way of living.”

A high proportion of the suggestions were children’s books; while some were obviously written by children, we wondered how many of the others were written down by adults for children, and how many were adults nominating children’s books. Perhaps such books readily sprang to mind because they are readily passed directly from one generation to the next, as in the experience of one visitor who responded: “Shel Silverston’s The Giving Tree – I read it as a child and my daughter loves it now.”

Overall, the responses showed that reading in various genres is alive and well in 2017, and I’m hopeful that if humanity has not destroyed itself in 2367, people (and perhaps bots) will still be reading at least some of the works suggested – be it in codex, tablet, or some yet-to-be-invented reading technology.

Paradise Lost at 350 was organised by Jane Gallagher and Naomi Billingsley. We are grateful to the Visitor Engagement and Facilities teams at the Library for supporting the activities, and to Dr Douglas Clark (English Literature) and Dr Holly Morse (Religions & Theology) for contributing talks to the event.