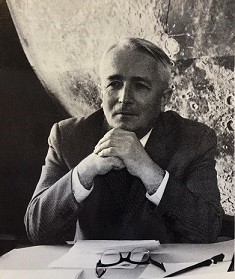 With generous support from the American Institute of Physics, work has started on cataloguing the papers of the Czech-born astronomer, Zdeněk Kopal (1914-1993).

One of the largest archives of its kind for a modern British astronomer, it provides significant information about the development of the international astronomical community, particularly during the 1950s and 1960s, a period of ground-breaking research and unprecedented public interest in the ‘Space Race’.

Described in his time as ‘one of the world’s leading astronomers’ (S. Fred Singer, 1972), Kopal is little known today.  As the Chair of Astronomy at Manchester University (1951-81), Kopal’s research on the transfer of mass between separate stars in a binary system remains the key to understanding many modern observations of violently eruptive behaviour in the stellar system.  In the mid-1950s, Kopal’s work mapping the surface of the moon paved the way for the Apollo 11 mission which landed the first humans, Neil Armstrong and Buzz Aldrin, on the moon in 1969.

Kopal began his academic career at Prague, where he studied under the German astronomer Erwin Finlay-Freundlich (1885-1964), a working associate of Albert Einstein. Kopal subsequently moved to the USA where he taught at Harvard and the Massachusetts Institute of Technology during and after the Second World War.

At the University of Manchester, Kopal built up an international reputation for the department. In the mid-1950s he developed a great interest in lunar studies. He assembled a team to take over 100,000 photos of the moon’s surface, using the 2-foot diameter refracting telescope of L’Observatoire du Pic du Midi in the French Pyrenees. The telescope had a sufficiently long focal length of 60 feet to produce high quality images for lunar mapping.  Funded by the United States Air Force, the project gave considerable prestige and funds to the Manchester department.

Described by colleagues as likeable, friendly and eccentric, Kopal made many other contributions to astrophysics: he established a lively school of disciples in Manchester where he taught students from all over the world.  In 1962, he became the founder and first editor of Icarus, a scientific journal dedicated to the field of planetary science, and in 1966, while on leave from Manchester, Kopal acted as consultant to Moon-exploring programs of the National Aeronautics and Space Administration. In 1968, he founded an independent journal, Astrophysics and Space Science, challenging the monopoly of more established publications such as the Astrophysical Journal. Later he founded the Moon journal, now expanded into Earth, Moon and Planets.

The Kopal Papers, along with the papers of scientists John Dalton and James Joule, the National Archive for the History of Computing, and the archives of physicist and radio astronomer Sir Bernard Lovell and the Jodrell Bank Radio-Telescope Observatory, constitute a major research resource for the history of science and technology. Cataloguing the archive at this time coincides with growing academic and public interest in the history of the ‘Space Race’ as we approach significant anniversaries of the era’s achievements, for example the 50th anniversary of the Apollo 11 landing on 20 July 2019. The Zdeněk Kopal collection will be used to support the Library’s public engagement programme around this important anniversary.

Forthcoming blogs in this series will look at Kopal’s fascinating work in more detail.

3 comments on “The Great Depths of Space: Cataloguing the Papers of Zdeněk Kopal”