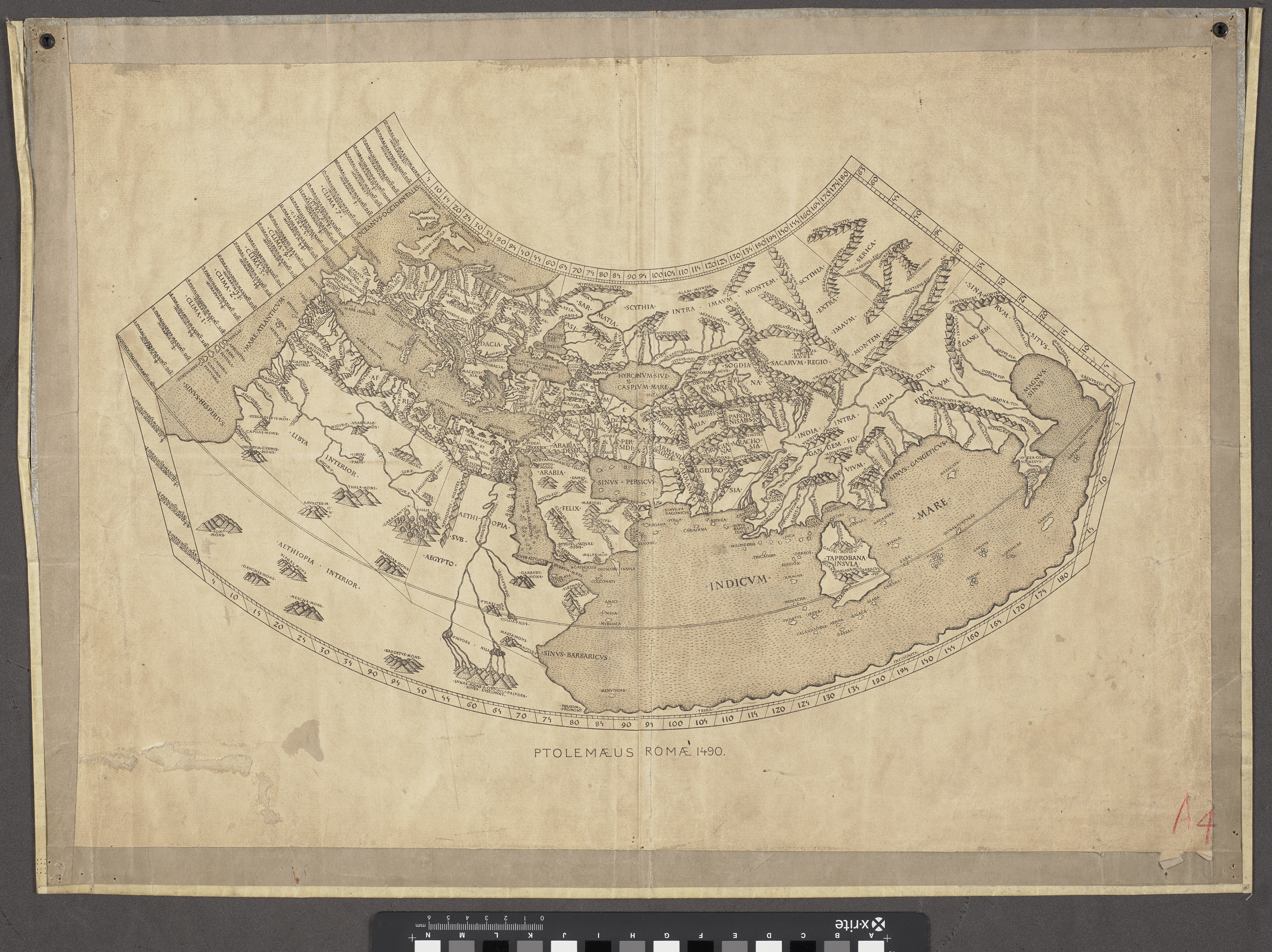 Mills was especially enthusiastic about teaching the History of Cartography, and he touches on this in his introduction to the printed catalogue:

“Historical Cartography, or the study of the evolution of maps, is a branch of history involving wide geographical knowledge. It is distinct from pure geography, which is a study of the surface of the earth, distinct also from historical maps, which are drawn by modern geographers to show the names and political divisions of the past in accordance with the researches of modern historians. Old maps and their facsimile reproductions show the geographical ideas of the past, the rise of geography in the ancient world, its eclipse during the Dark Ages, its renaissance during the later Middle Ages, and its sudden expansion in the 16th century. In studying the evolution of geographical ideas we are in effect studying the history of the world by a method not only picturesque and fascinating, but probably as accurate and comprehensive as if art or war or religion or politics or economics or any other special base line were chosen, from which to start a survey of historic time. The interest is more human than technical.”

During my time working on this collection, I have been privileged to see the vast array of maps that are included within it. Mills organised ‘a Catalogue of Historical Maps’ into several thematic sections, and so I thought I would share with you five maps from various sections, complete with quotes from Colonel Mills that were featured in an ‘Exhibition of Old Maps‘. However, narrowing it down to five maps has taken a lot of thought as there are so many fascinating items within the collection – I would love to feature them all.

You may have heard the name of the Greco-Roman polymath, Claudius Ptolemy. He lived in Alexandria in the 2nd century AD, and his work – titled the Geographia – has been extremely influential within the fields of Cartography and Geography. Mills includes Ptolemy’s maps in his initial section, ‘World Maps’. No original maps have been discovered that are attributed to Ptolemy, and so the present form was reconstructed using the lists of latitudes and longitudes featured in his Geographia. This particular map shown below hails from A. E. Nordenskiöld’s Facsimile-atlas, which was published in 1889. Mills states that “it is the reproduction of a map printed in Rome in A.D. 1478 from a MS. [manuscript] drawn a few years previously”.

This additional item below clearly illustrates the teaching of Cartography, with information and a facsimile of Ptolemy’s world map, as well as including a timeline of significant maps throughout time.

Waldseemüller – “the cartographer who christened America”

Mills enters the ‘Age of Discovery’ for the second section of this catalogue, which explores maps and globes from 1492 until the end of the sixteenth century. Many of the facsimiles within the Booker-Mills collection are of original size, and Martin Waldseemüller’s Universalis Cosmographia is no exception. This facsimile was based on proof sheets found in Würtemburg of the original map and published by Wagner’sche Universitats-Buchhandlung (Innsbruck) and Henry Stevens, Son & Stiles (London) in 1904.

Waldseemüller labelled the “fourth part of the world” as ‘America’, in honour of his friend Amerigo Vespucci. He also included an illustration of Amerigo, which is seen below. Waldseemüller published Cosmographiae Introductio, an introduction to Cosmology, to accompany his printed globe and wall-map in 1507. Waldseemüller’s introduction includes the reason why he decided to name the new continent after Vespucci, as well as including a Latin translation of the four journeys of Vespucci, who was an Italian explorer.

Willem Blaeu was born in the Netherlands in 1571. He was trained in astronomy and the sciences, but then went on to found a business creating globes which later expanded into maps and atlases. In the British Library ‘Treasures’ exhibition, a fabulous globe by Blaeu is on display.

Mills states that “the Italians, then the Dutch, then the French, were ahead of the British” in terms of cartography. There are many prints of works from Dutch cartographers featured in the Booker-Mills collection, such as Visscher, de Witt, Janssonius, Allard and Blaeu among others. This map of the British Isles by Blaeu from 1630, complete with a sea monster breaking the waves in the top right-hand corner, was most likely based on the copperplates of Jodocus Hondius, which Blaeu acquired in 1629.

Hollar – “the finest representation of London before the fire”

Wenceslaus Hollar was born in Prague in 1607, and was an etcher famous for his cityscapes and beautiful panoramic maps. The original creation, entitled ‘The long view of London from Bankside’, was published in 1647 and depicts London from a single viewpoint – the tower of St Saviour in Southwark. The date of publication is significant, as the map illustrates London before the damage of the Great Fire in 1666.

This facsimile was published by The London Topographical Society in 1906. The John Rylands Library has also acquired one of Hollar’s sketchbooks, with a preliminary sketch; View of the Thames featuring Shakespeare’s Globe Theatre. The similarities can be seen when comparing this sketch with the same spot on the left side of the map. This is not just a map of London, but also an aesthetically pleasing piece of art.

George Philip opened a booksellers in Liverpool in 1834, which expanded into producing educational textbooks, atlases, wall-maps, stationary and much more. His son joined the business in 1848 and it was renamed George Philip & Son Ltd.

I have encountered many wall-maps and atlases by Philip and Son within the University of Manchester Library’s map collections, especially these pocket-sized folded maps that are bound in-between boards. This particular map of China is priced on the front cover at ‘one dollar’. Many of these maps were ideal for educational use and perfect as a compact travel map for tourists. These maps give an interesting insight into contemporary culture as they feature advertisements of the day – such as this advert from a Philip and Son map which is part of the Manchester Geographical Society collection.

The cover of this map is marked with Dudley Mills’ bookplate. This displays that these items did indeed come from his personal collection. Throughout his introduction to ‘a Catalogue of Historical Maps’, his passion for the teaching of Cartography and Geography shines through, and by the accession of the Booker-Mills collection to the University of Manchester Library in 1937, this collection will continue to influence and inspire students of all disciplines in the importance of historical maps.

We will be tweeting about the University of Manchester Library’s map collections under the hashtag #UoMMaps. Thank you to the fabulous Maps Librarian, Donna Sherman, for her continued support – and to the Heritage Imaging Team for agreeing to tackle such large items!

1 comment on “Delving into ‘a Catalogue of Historical Maps’”