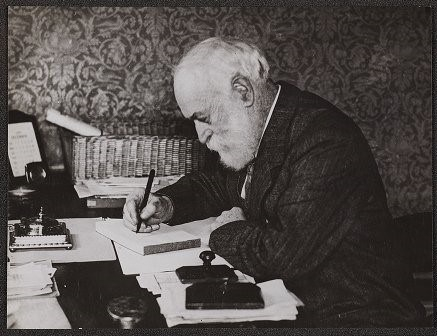 In January 2019, as part of my MA programme at Liverpool University, I catalogued a series of First World War correspondence from the Guardian (formerly Manchester Guardian) Archive held at The John Rylands Library.

My chief aim was to create a subject-specific finding aid, a navigational tool for those seeking out the lives and voices bound up in the paper’s wartime correspondence. There’s something about a handwritten letter that is irresistible to those of us with prying or sentimental tendencies – and without exception, I tick both of those boxes. As I began to recognise the names that recurred time and again in this series (like C.P. Scott and James Bone), I also came to know how these individuals’ lives became enmeshed in one of the most seminal periods of modern history; viewed together, this correspondence portrays the Guardian’s growing political influence during the Great War. In this post, I share a few fascinating letters and stories from the archive.

The vast majority of this series comprises correspondence from Charles Prestwich Scott, the man widely credited for cultivating a provincial journal into a national media outlet during his Manchester Guardian editorship from 1872-1929. As previous posts have highlighted, Scott maintained an impressive address book that included leading politicians like David Lloyd George, Winston Churchill and Ramsay MacDonald – all of whom feature in this series. Scott’s letters suggest that while he didn’t actively advocate for British involvement in WWI, he felt that promoting national unity was paramount to maintaining public morale and securing victory for the Allies.

Although Scott was privately rather critical of the Government’s foreign and military policies, many of these letters show that his refusal to publicly oppose the war earned him criticism from some of his closest confidantes. Given that Scott used the Manchester Guardian as a platform to denounce the Second Boer War just over a decade earlier, many of his contemporaries expected the paper to take a similarly critical stance against WWI – but this was not to be. The extract below is taken from a 1914 riposte addressed to the social reformer (and Scott’s good friend) Emily Hobhouse, in which Scott refutes her claim that the MG’s journalistic integrity is damaged by its support of the war. Scott deems it ‘futile’ to outright oppose the Great War as the paper did the Boer War, because the politics of the two conflicts are discrete from one another.

Scott’s letters are characteristically terse, direct and razor-sharp. A standout example from this series is a 1915 letter addressed to W H Woodward (below), in which Scott deplores Woodward’s earlier suggestion that in order to avoid military defeat, the British could join the German Empire as a member state. Scott was evidently appalled by this proposal: he calls it ‘absurd and unworthy’, stressing that he wishes to curtail his correspondence with Woodward.

Women’s Voices in the Guardian Archive

Given the time period, it perhaps won’t come as a great surprise that women correspondents rarely feature in this series – the Manchester Guardian would not gain its first female editor, Madeline Linford, until 1921. Nonetheless, the women’s voices that do come through here are remarkable, often distinctly political in their tone. Take, for example, an extraordinary 1914 letter (below) from Emily Hobhouse, the social activist who campaigned tirelessly against the Second Boer War. Hobhouse appears as a distinctly singular advocate for women’s issues in the MG’s WWI correspondence. She envisages that after the war’s inevitable economic fallout and gross human rights breaches, ‘the bulk of the misery will fall […] on women and children’; as a witness to the appalling living conditions of women and children interred in British concentration camps during the Boer War, Hobhouse speaks from a place of unenviable experience. She also mentions – albeit tentatively – battlefield conversations amongst German, French and British soldiers, framing such interactions as a catalyst for peace negotiations. Amongst a cacophony of militarism and political manoeuvring, Emily Hobhouse is a rare, defiant voice of hope and humanitarian issues.

Of all the stories told through these letters, one in particular sticks in my mind: that of John Masefield, poet and novelist. Though old enough to be exempted from military duty by the time of WWI, Masefield travelled to north-eastern France in 1915, where he worked as an orderly in a British hospital for French soldiers. In April of that year, he wrote to Scott requesting a donation for a travelling field hospital that he and some friends were planning to set up; a week later, he wrote again to thank Scott for sending £10 (worth around £1,000 today) to help set his plans in motion. The actions of both Scott and Masefield, recalled in these letters, are a window onto the incredible acts of compassion enacted by everyday people during times of extreme trauma and turmoil.

As someone with shamefully little knowledge of the circumstances surrounding WWI prior to this project, cataloguing these letters was truly eye-opening for me. What I perhaps didn’t anticipate was how emotionally invested I would become in the correspondents’ lives, and that of the Manchester Guardian itself; here was such unimaginable conflict rendered in such ordinary, everyday words. By their nature, these letters were intended as transitory things – so they often survive as fragments. Political and wartime intelligence is contained in handwritten memos and anonymous notes; it appears that information found its way to Scott and the Manchester Gurdian from all manner of sources, through ephemeral mediums, relentlessly. Some letters provide answers while others pose more questions; they open intimate, if fleeting, windows on their correspondents’ inner lives and thoughts during a time of global unrest.

You can access the full descriptions for ‘GDN/E: Papers relating to the Manchester Guardian and the First World War’ here.