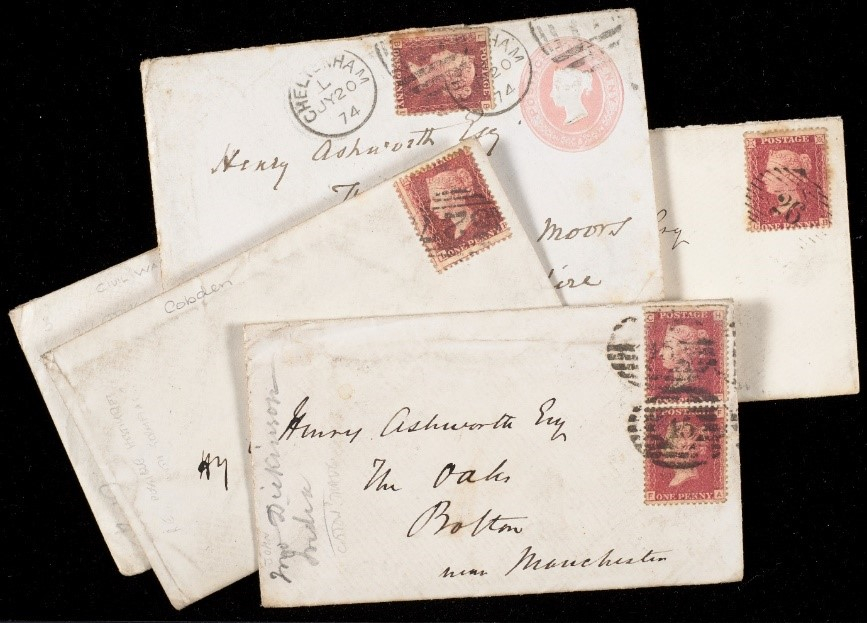 The expression ‘Manchester Man’ is used to describe an ambitious, self-made man whose wealth and political influence is based on commerce and manufacture.  The term perhaps has its origins in a book of that name by the Victorian novelist Isabella Banks.  Earlier this year the John Rylands Library was delighted to acquire two collections which shed light on the life and times of Henry Ashworth (1794–1880) who in many ways typifies the ‘Manchester man’.  Henry was a member of the Ashworth Family who built up a significant cotton empire in nineteenth century Lancashire.

Henry Ashworth was a leading light in the Anti-Corn Law League which, as the name suggests, campaigned to repeal the Corn Laws which kept the price of bread artificially high, benefiting the aristocratic interest at the expense of working people.  He was a passionate advocate of free trade, a mid-nineteenth century economic movement whose intellectual centre lay in Manchester. Ashworth was a close friend of Richard Cobden and John Bright and was a key player in the economic and political life of Manchester.  By all accounts Henry was an eloquent and persuasive speaker with ‘a gift for pungent analogy and expression’ (Rhodes Boyson, p 203.)  His close involvement with the League saw him criss-crossing the country giving lectures and addressing meetings to promote repeal. As a devout Quaker his speeches often used biblical references to underline the sanctity of the case for repeal. Henry Ashworth’s Recollections of Richard Cobden and the Anti-Corn Law League (1876) offers an important history of both the League and Cobden’s political career.

The first collection is a small bundle of 41 letters (some with printed enclosures) addressed to Henry Ashworth from various high profile correspondents including John Bright, Richard Cobden, Joseph Parkes and his brother Edmund Ashworth. The letters concern cotton manufacture, the activities of the Anti-Corn Law League and national politics.  For example, a letter from Joseph Parkes, dated 4 July 1859, discusses whether Cobden should have refused a place in Palmerston’s cabinet. Parkes thought not, concluding that ‘if Manchester Men wait till they join a Cabinet all of their own mind I think they may long whistle for their own particular wind.’

The second collection is much more substantial and sets Henry Ashworth within his wider family context.  The Ashworth Cross Family papers, which arrived in Spring 2019, has its origins in the family of Thomas Ashworth (1794–1880), the younger brother of Henry Ashworth.  It is a large acquisition that requires sorting, reboxing and cataloguing. Much of the collection is correspondence between the members of the Ashworth and Cross families and their relations and friends.  The range of topics is immense, from cotton manufacture, mining and politics to the early women’s suffrage campaign, mental illness and travel.  There are also a number of objects including photograph albums, family portraits, watercolours, silverware and even a tin trunk which once belonged to John Bright. The Ashworth Cross Family Papers is an extensive collection and there will be more blogs highlighting its content as we work through this fascinating acquisition. In the meantime for those interested in the family letters, this part of the collection arrived with a useful introduction to and inventory of the family papers, prepared by Diana Scott-Kilvert in 1977: Ashworth Cross Papers List.