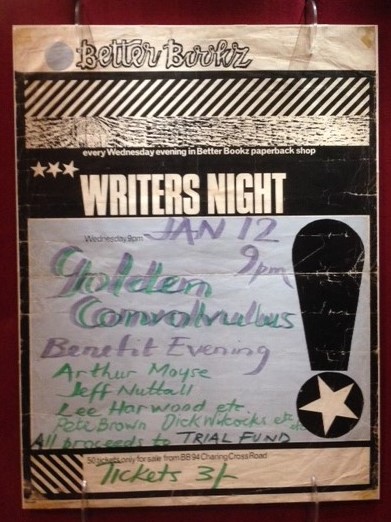 One of the joys of the John Rylands Library is working alongside clever colleagues happy to share their knowledge in a wonderfully collegiate atmosphere. An example of this came at an event during which I talked about the 1960s obscenity trial of poet and publisher Dave Cunliffe, after which Shreeve Fellow Dr Rebecca Whiteley pointed out similarities between the plot of AS Byatt’s novel Babel Tower and Cunliffe’s prosecution. Buying a second-hand hardback copy the size and weight of a house-brick, my train journeys to work over the next couple of weeks were illuminating if burdensome as I lugged the great tome around Manchester. Published in 1997 as part of a quartet of novels in which the young Frederica Potter develops in mid-twentieth century Britain, it features the story of author Jude Mason and his work Babbletower satirising the counterculture through a story in which medieval attempts to live communally end in torture and depravity. This ‘mise en abyme’ or ‘book within a book’ leads to Mason’s 1966 trial for his descriptions of degeneracy as the society collapses.

In the summer of 1965 the Blackburn house of Cunliffe and his BB Books co-editor Tina Morris was raided three times by police after copies of their pamphlet Golden Convolvulus, featuring verse and art edited by the anarchist Arthur Moyse, were seized from the local sorting office. Considered an attack on freedom of speech and an attempt to set a legal precedent away from London by the literati, Cunliffe’s obscenity charge brought support from authors on both sides of the Atlantic with readings and offers to speak on his behalf from leading literary and political figures including the MP Michael Foot, poet, artist and monk dom sylvester houédard, author Alan Sillitoe, and the critic George Melly. In his later work Offensive Literature (Junction Books, 1982) the academic John Sutherland considers the trial the first of a series of political prosecutions by a government pushing back against encroaching liberalism. Covered widely in the national press and on Granada TV news, the hearing lasted three days with Cunliffe eventually being found not guilty of the major obscenity charge but convicted of the minor offence of sending lewd material through the post for profit, leaving him with a fine of £50 and the then not inconsiderable sum of £500 in court costs.

As at Cunliffe’s trial, in Byatt’s novel Jude Mason’s defence rests upon the precedent set in the Lady Chatterley prosecution in which the legal team of the defendants argued that a work of literary merit, even if deemed offensive, should be publishable without interference. Both trials feature debate over whether the use of certain words in literature can influence impressionable readers to act inappropriately, the dangers of a growing ‘permissive society’, and how the avant-garde uses shock to push against boundaries in order to create new art forms. Beyond these obvious themes, it’s some rather odd similarities which connect the two legal proceedings. In the Babbletower trial it emerges that Mason is a vegetarian autodidact while Cunliffe made much play of being a self-taught vegan while Mason’s defence team also call an MP and a man of religion (Canon Adelbert Holly) to speak on his behalf. In Byatt’s work there’s use of a William Blake quote, ‘Sooner murder an infant in its cradle than arouse unacted desires’, which Cunliffe had been reported in the media as using on a protest banner and, both found guilty, Mason is also fined £500 and £50 and, in what appears a nod towards the Blackburn trial, Byatt references a convolvulus in the epilogue of the novel.

Intrigued as to whether Byatt based her work on the Cunliffe case I made contact with the author via her agent and then secretary. Dame Antonia denied any knowledge of the Golden Convolvulus prosecution asserting that the Babel Tower obscenity hearing was based purely on the Lady Chatterley affair. In my email correspondence with Byatt’s secretary she seemed rather less convinced that the similarities were merely coincidence, offering to check the notes written whilst researching the novel but I’ve heard nothing since and will have to presume that no references to the Cunliffe trial were found. Although there are differences between the DH Lawrence trial and that of Jude Mason it is possible that this was the basis for Babel Tower but that requires us to believe that the similarities with the Blackburn case are purely coincidental. Unsure as to why Byatt would deny the link (if it exists), it has been suggested that this might be due to fear of legal action or possibly just an author’s desire to maintain an element of mystery about her sources but it certainly remains an intriguing conundrum.

The Dave Cunliffe Archive held in The John Rylands Library Special Collections holds approximately three and a half thousand small press poetry pamphlets, periodicals and countercultural publications from around the world. Dating from the early 1960s it consists of material from Lancashire’s BB Books press edited by Tina Morris and Cunliffe containing correspondence with numerous poets, authors and activists and has a huge amount of related poetic, political and artistic ephemera much of it currently not listed or catalogued.