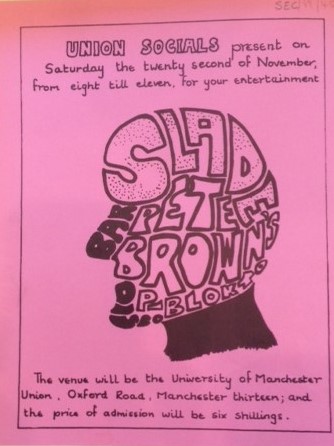 From 1969 to 1976 a University of Manchester Library initiative collected flyers, posters, letters and handbills distributed around the campus forming a substantial archive within Special Collections. Since starting work at the John Rylands Library Reading Room I have begun listing the contents of the Student Ephemera Collection (GB133 SEC) which although numbered and assiduously organised has remained uncatalogued for the best part of fifty years. What’s exciting about the archive is its insight into student life from that period – particularly radical politics (on which I’ll focus in future blogs) but also adverts for gigs, concerts, and performances largely across most of the city’s different academic institutions.

The Manchester Digital Music Archive is an excellent initiative documenting the city’s musical ephemera (https://www.mdmarchive.co.uk) its website containing scanned posters, flyers, tickets and photographs from the live scene and which I highly recommend giving a visit. But, although it holds a huge amount of musical material (both pop and classical) most of the artefacts date from later in the 1970s onwards. There are notable exceptions such as those of the Royal Northern College of Music and the Free Trade Hall but the posters and flyers held in the Student Ephemera Collection are nowhere to be seen within the MDMA making it an entirely new window upon the city’s cultural events of the late 1960s and 70s. Apologies for the poor quality photographs accompanying this blog but that’s because they were originally taken only as reference points for the box listing and not for display on the John Rylands Library website. The other thing to note is that I had only listed material from about one and a quarter boxes (i.e. 1969 and the first few months of 1970) by the time the virus quarantine hit so this is an analysis of just a fraction of the collection.

Probably the first thing to note is what a hard working band Slade were in that period – appearing several times in Manchester over just a few months here with Pete Brown’s Piblokto! at the University’s student union. Brown connects this archive with several others held in Special Collections as he was initially known as an experimental poet linked with Dave Cunliffe, Jeff Nuttall and Jim Burns who he appeared alongside in Mike Horovitz’s Children of Albion (Penguin, 1969) anthology. Brown is better known as the lyricist with the band Cream, song-writing for Eric Clapton, Ginger Baker and Jack Bruce, Piblokto! being a relatively short lived outfit (69-71) notably featuring future Gong drummer Laurie Allan.

Most won’t recognise the name Christine Perfect, here gigging at the SU in November 1969, but becoming much better known when she married Fleetwood Mac’s John McVie, joining the band just a few months after this gig and also appearing elsewhere in the collection playing with blues band Chicken Shack. Mystified by the name Petrus Booncamp on this flyer I initially presumed the gig to be sponsored by the liqueur Petrus Boonekamp L’Amaro but then stumbled across a reference to the band on the It’s Psychedelic Baby website (www.psychedelicbabymag.com) Booncamp’s Linda Rothwell and John Williamson going on to be vocalist and bass player with Manchester’s premier Prog Rock outfit Goliath. The flyer also refers to a Nova Express Lightshow, this being the area’s principle psychedelic lightshow run by future computer artist Paul Brown, a fascinating interview about his work appearing on the Oxford University Press Blog: (https://blog.oup.com/2018/12/nova-express-psychedelic-light-show/) including some fantastic slides from that period.

Grass Eye was one of Manchester’s alternative newspapers running from 1968 to 1971 and which included cartoons by Ray Lowry whose work I discovered many years later in the NME but who also drew for the Guardian and Private Eye. This flyer advertises a benefit gig by Keith Relf’s Rennaisance, Relf having a major impact on British psych-pop earlier in the sixties playing guitar with the Yardbirds and co-writing some of their best tunes including Shapes of Things. Most countercultural publications were run on a shoestring budget so benefit gigs of this sort weren’t unusual, the connection with the underground lending bands an element of reflected hipness in return.

Beginning in the early 1960s playing trad-jazz, the Bonzo Dog Doo-Dah Band had by 1969 become a well-known rock group with the 1968 hit I’m an Urban Spaceman written by the now sadly deceased Neil Innes. The Bonzos had already crafted a strange musical career as resident band on the TV show Do Not Adjust Your Set, band members appearing in comedy sketches alongside Michael Palin and Terry Jones and featuring in The Beatles’ Magical Mystery Tour film, Innes working with Eric Idle creating fab four spoof band The Rutles and mockumentary All You Need is Cash.

More esoterically these flyers advertise Royal Manchester College of Music Student Union concerts with a performance by Lancashire’s Harrison Birtwistle alongside Peter Maxwell Davies who studied together and the singer Mary Thomas who often worked with the latter in the Nash Ensemble, here playing their own compositions and Schoenberg’s Pierrot Lunaire in full costume with lighting effects. The second flyer is for a performance by Roger Smalley, Tim Souster, Andrew Powell and Robin Thompson, composers who had earlier studied under Karlheinz Stockhausen and then collaborated in various ways including in the electronic experimental group Intermodulation Powell then joining influential avant-garde band Henry Cow.

Please Take One was a gig listings freesheet covering Manchester and beyond this edition giving some idea of how lively the region’s music scene then was. Some of the standouts include Black Sabbath playing the University SU only a few weeks after the release of their first LP, Mott the Hoople at the Electric Circus (a venue perhaps best known for hosting numerous punk gigs later in the decade), Love Sculpture featuring Dave Edmunds who became an important pub rock, punk and new wave producer and an ad for the first edition of Time Out North West edited by Jeremy Beadle who organised the 1972 Bickershaw Festival where Captain Beefheart and the Grateful Dead played to thousands of muddy hippies on an old coalfield near Wigan.

Now that most gigs are advertised mainly through social media it’s worth pondering how difficult it may be to fully archive these compared to the SEC which preserved paper documents giving researchers the opportunity to study past culture. I understand that great progress is being made archiving digital material and perhaps preserving electronic footprints may actually enable a more sophisticated and comprehensive cultural analysis, less reliant on the whims of outlying librarians or their ability to collect paper from around an academic campus. I believe though that there is something important about being able to handle the original material as it often contains other elements of the story – the quality of the paper, the typeface or pictures and the method of reproduction giving archivists and academics information unlikely to be retained for the future study of electronic media.