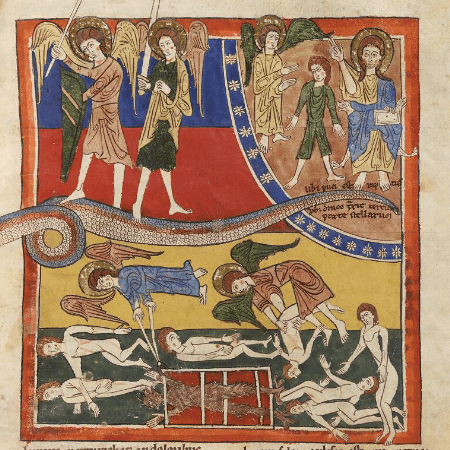 Through our social media channels, this week we are featuring images from our medieval European collections. Visitor Engagement Assistant Lee Brooks, who is also working towards a PhD in History at the University of Manchester, explains what some of these documents are. Lee’s PhD encompasses medieval secular and ecclesiastical politics, including clashes between Church and state in England in the period 1066-1200.

The John Rylands Library is incredibly fortunate to hold a wide variety of medieval treasures. The collection includes works of literature, religious texts, legal documents, and administrative records to name just a few. In this blog, I explain what certain types of medieval documents are. It is certainly not a complete list. If you are interested in seeing more, you can do so via LUNA and the Manchester Digital Collections sites.

This blog focuses on documents from Europe, however the study of history for this period should by no means be limited to medieval Christendom. The John Rylands Library contains works from all over the world, including items seen in the recent Seeing the Invisible exhibition, which featured medieval Syriac and Arabic manuscript collections. Do keep an eye on the Special Collections blog which explores a wide range of our collection in more detail.

In medieval Europe, the production of manuscripts was dominated by monasteries and churches, so many of the texts that survive to us today are religious texts. A missal is an instruction book on how to say the mass, and in the medieval period we often see them decorated with illuminated letters and images.

This example of a missal from our collection was produced in Salisbury in the thirteenth century, and you might recognise the elaborately decorated scene as a depiction of the Nativity, featuring the infant Christ and the Virgin Mary in the centre. Of course, we can’t forget the stars of many a Nativity play – the hungry animals at the bottom, not all too fussed with the coming of Christ!

Were you heading for heaven or hell? Either way, after death you may have had to wait in purgatory first. Purgatory was believed to be the place between heaven and hell, where you would await your final judgement. The concept of purgatory gained traction in the Middle Ages, and this eventually led to the granting of indulgences. To reduce your time in purgatory and increase your chances of spending eternal life in heaven, you could receive an indulgence, granted by the Church. Indulgences didn’t come cheap; you would have to earn it by your actions. This could have been through pious deeds or by making a donation to the Church. By the late Middle Ages the concept led to a lucrative system of selling indulgences, where you could buy your way out of your sins. This system became even more widespread after Johannes Gutenberg introduced the printing press with movable type to Western Europe in the 1450s, which allowed for the production of indulgences on a much larger scale.

The John Rylands Library holds one of the first such indulgences, which is an early example of printing. This particular indulgence was issued by the archdiocese of Cologne, which was granted in return to support a military campaign against the Turks, dated 27th February 1455. As the fifteenth century progressed indulgences were being sold all across Europe, covering all manner of sins. By the sixteenth century the concept of selling indulgences came under increasing attacks from those looking for change in the Catholic Church, such as Martin Luther, who believed the selling of indulgences was being abused.

In Christian monastic practice, the day is broken up into a routine of eight different times, known as canonical hours. At each time, a set of prayers and psalms are recited. In the medieval period, lay people (people who were not part of the church clergy) wanted to integrate part of this monastic practice into their own daily lives, and so it became popular to own a personal book of hours which would contain prayers and psalms, ready to recite at the appropriate time. They became fashionable and wealthy benefactors could have their books elaborately decorated.

Books of hours have survived more than any other medieval illuminated manuscript, and the Rylands collection features a variety of examples, from those containing just the basic text, to stunningly beautiful works featuring manuscript illumination alongside the text itself. This example, produced in the late fifteenth century, was owned by Mary, Queen of Scots, and the image on this page features St Margaret rising from the back of a monster.

A charter is a document that records a grant or transaction, and in the medieval period, this could have been issued to record different things, including grants of property, rights or money. Charters could have been issued by those at the very top of medieval society such as monarchs and popes and as the medieval period developed, private charters became more common. They were often written in Latin and can be a really useful source of information for historians, as many contain details of dates, places and individuals. Perhaps one of the most famous examples of a medieval charter is Magna Carta (Latin for ‘Great Charter’), which was an agreement of rights between King John and his barons in 1215.

The Rylands holds many charters from different levels of society, including this charter dated c.1130-1140, detailing a transaction from the Earl of Chester to Alan Silvester. A seal could be added to mark a document’s authenticity, but in many cases they haven’t survived. In this instance you can make out the Earl of Chester himself riding on horseback.

A chronicle is a document that records historical events, often laid out chronologically. They weren’t just from Europe or the medieval period, with historical chronicles occurring all over the world. In terms of medieval Europe, many still survive to this day. The most notable in England is the Anglo-Saxon Chronicle, begun during the reign of Alfred the Great and extending up to 1154, covering major events including, for example, the battle of Hastings in 1066.

Some chronicles would borrow from others and could blur the lines between mythology, literature and history. An example of this held at the Rylands comes from the Marlborough Brut Chronicle, produced in the fifteenth century, which is composed in Middle English. This passage details the slaying of a giant named Gogmagog, who terrorised Britain along with many other giants, before the founding of London, described here as New Troy. Later in the work, the chronicle records contemporary events that can be corroborated.

A hagiography is a biography of a Christian saint, including details of their pious actions and miracles. These works were popular in medieval Europe, and could be used to promote a cult around a particular saint. Saints’ cults could often be quite lucrative for a local area or church, as people would visit the shrine or relics of a saint as part of a pilgrimage. Hagiographies were used to help promote a cult, so therefore they did not convey negative information about a holy person, and can contain exaggerated ideals and actions.

This example, from a thirteenth or fourteenth century manuscript of a work originally written in c.1180, is from the Life of St Edmund. St Edmund was King of the East Angles who was killed by Danes in the ninth century, and in the accompanying image, St Edmund appears as a vision in a dream.

A work known as a Beatus is a commentary on the apocalypse, often decorated with images depicting scenes from the Book of Revelations in the Bible. This type of work takes its name from a Spanish monk called Beatus of Liébana, who first created his commentary in the eighth century. The image depicted here is from what is known as the ‘Rylands Beatus’, created in the late twelfth or early thirteenth century, also in Spain. In this particular image, a demon is confined to a cage which is being controlled by an angel. There was some incredible imagery produced throughout this work, and you can access it at the Manchester Digital Collections resource here, including being able to search through different pages depicting scenes from the apocalypse.

3 comments on “Revealing the Rylands: Making Sense of the Medieval”