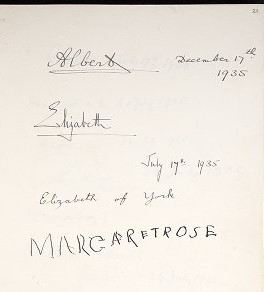 We are currently compiling the metadata for the digitised Sitters Books of the artist Frank Salisbury, a noted painter of portraits and ceremonial events in the first half of the 20th century, whose papers are held in the Methodist collections at The John Rylands Library.

After deciphering as many signatures as possible, we are now recording each sitter’s key biographical details, honours received, professional accomplishments and significant connections.

For prominent historical figures, this is a simple task. In the cases of Princess Margaret, Franklin Delano Roosevelt (whose Salisbury portrait still hangs in the White House) or the actor Richard Burton, for example, information can be found by turning a page or typing a Google search. More obscure figures can prove troublesome. Some yield no online search results, but others generate too many, particularly if the sitter’s name is commonplace. Then it becomes necessary to determine which results correspond to the signature in the Sitters Books. To this end, we consult a variety of online sources including family trees, legal documents, footnotes in books concerning other people’s lives and, inevitably, those melancholy websites recording the burial places of ordinary folk.

Through the course of our research, we have become familiar with British royalty and aristocracy, Indian Maharajas, American self-made millionaires, shipping and steel magnates, war heroes, Methodist ministers, socialites and entertainers. Each person has a story to tell…

There is plenty of scope for error, and although checking and re-checking is a chore it is essential for maintaining accuracy.

For example, a small confusion concerning two identical names nearly led to the conclusion that one sitter had signed up to the U.S. Air Force and fathered a child – all before his second birthday. Admirable achievements in themselves, but a bit much to expect of a toddler.

Nonetheless, the investigative process is often fascinating, granting a glimpse into a different-yet-similar time.

Whilst searching for information to corroborate one particular sitter’s identity, an Oakland Tribune newspaper headline from 1936 came to light. It mentioned the sitter, but focussed upon the misadventures of the sitter’s son (for the sake of good taste, the identifying names are blanked out):

Dramatic, certainly, and useful. Establishing that the sitter had a son, the story not only confirmed that sitter’s identity but connected the sitter conclusively to a family tree which in turn provided information about other sitters. One thing led to another, in an entirely helpful way.

Several people were painted by Frank Salisbury numerous times during their lifetime. The heiress and businesswoman Marjorie Merriweather Post’s large and distinctive signature appears no less than six times in the Sitters Books, variously with the surnames of husbands Edward F. Hutton and Joseph E. Davies, who were also painted by Salisbury. In addition, Marjorie’s fourth husband Herbert A. May was painted by him, as were two of Marjorie’s daughters Nedenia Hutton and Eleanor Post Rand. Family, friends and business associates are a common thread weaving through the Sitters Books – with Salisbury’s reputation, both as an artist and society figure, guaranteeing recommendations.

Not every signature in the books corresponds to a sitter. On occasions, Salisbury painted posthumous portraits, often commissioned by the subject’s widow or family members. For instance, Louise Carnegie signed for a painting of her late husband, the industrialist and philanthropist Andrew:

Working through both World Wars, Salisbury also painted those who fell in action. His portrait The Boy Cornwell in the Battle of Jutland (1917), depicting Jack Cornwell, the youngest winner of the Victoria Cross, is perhaps the most famous. Another was Captain John Stanhope Collings-Wells, who won his Victoria Cross in France during World War I:

As yet, it is unclear who wrote both their own name and Captain Collings-Wells’s name in the book; the first initial may be a “C”, suggesting it was Collings-Wells’s mother, Caroline, but is not clear enough to draw firm conclusions.

Our final task is to search for images of Salisbury’s paintings available online and to add these links to the metadata. Some are easy to find, others more obscure as they are in private hands. It is fascinating to transcribe a signature, research their life and then see the subject immortalised on canvas. A selection can be seen on the Art UK website. Major collections of his Salisbury’s work can be found at the National Portrait Gallery, Royal Air Force Museum, Wesley’s Chapel, Chicago History Museum, New York Genealogical and Biographical Society and the World Methodist Museum.

Once the lockdown ends and the Library re-opens, it will be possible to inspect Salisbury’s own papers for first-hand information; indeed, a good deal of fact-checking of this sort lies ahead. For a determined researcher the internet has myriad uses but remains a poor rival to an archive of primary sources.

The transcriptions will be linked with the digitised versions of the Sitters Books and launched on the Manchester Digital Collections website in early 2021.

0 comments on “Sign of the Times: the Sitters Books of Frank Salisbury – Part 2”