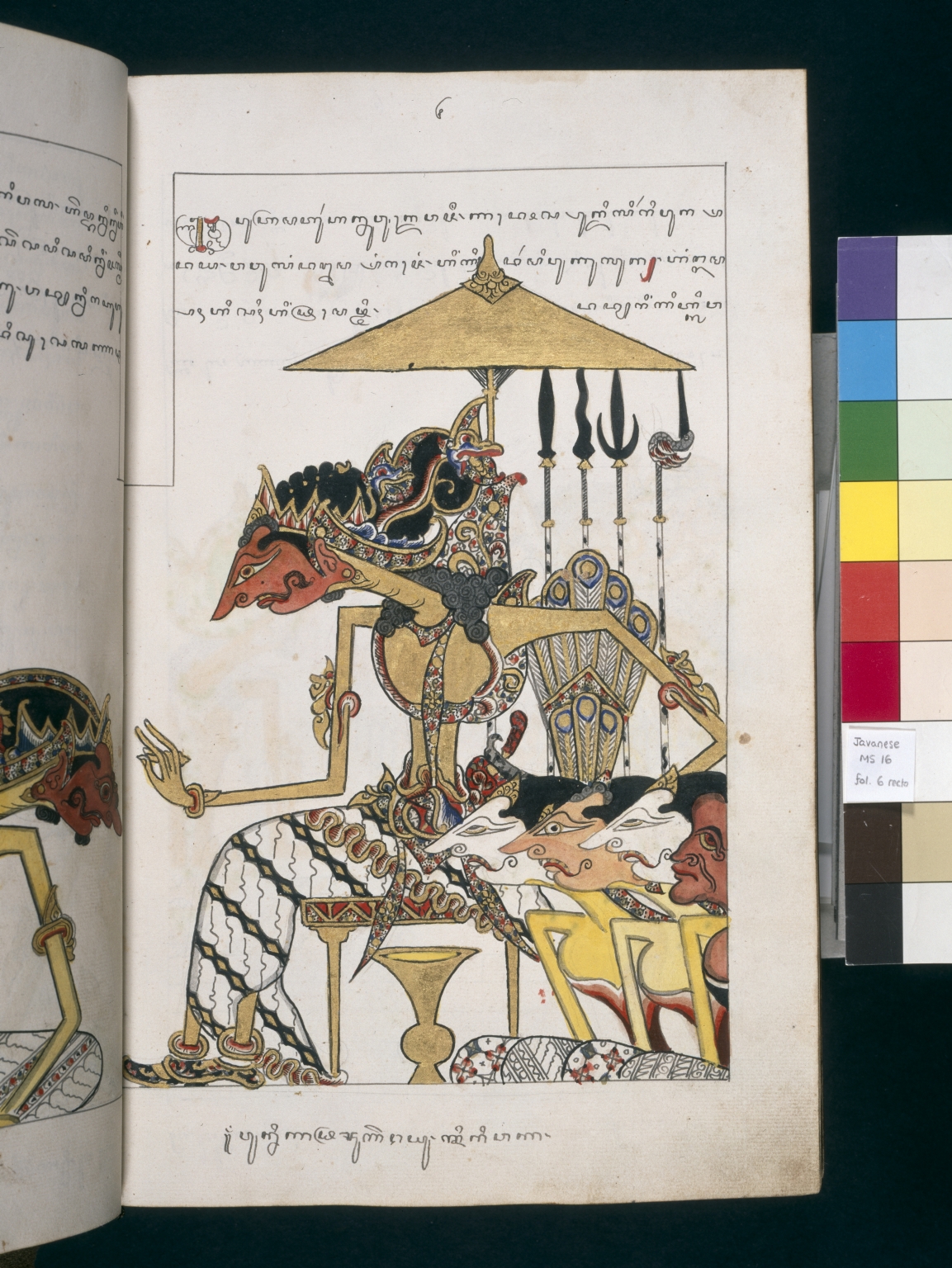 The third and final piece of our series celebrating South Asian Heritage Month explores Javanese history and culture with Riza Hussaini and Prince Panji, through Javanese MS 16 from the Southeast Asian Manuscripts Collection.

As seen from the map below, Java is not located within the area traditionally considered as South Asia, but this blog has been included in the SAHM series to demonstrate the significant religious and artistic influence from India.

Panji is a legendary Javanese Prince whose cycle of tales developed and has been performed since the Majapahit era (13th century).

There are many variations to the Tales of Panji and there is no single authoritative version. Growing up, I watched and listened to many tales of Prince Panji.

Depending on who is telling and which version, all tales travel through a stirring wave of sub-plots, complexities on themes of adventure, war and love. Whilst the core story remains the same, Panji in search of his betrothed, interpretations expanded to include side stories, disguises, name changes and so on. The tales drew from indigenous inspirations and often attributed to be a pioneering example of original Javanese literature.

My favourite telling would be the tragic but love-conquers-all tale of Dewi Angreni and Panji interwoven with mythical nuances, re-incarnation and unification. There is somewhat a happy conclusion but with the sacrifice and murder of one of the protagonists.

These elaborate theatrical plays, which can go on for hours (often between four and seven), transported my young self into the world of my ancestors. As Hinduism and Buddhism influenced old Javanese culture, plays portraying the Mahabharata and Ramayana also appeared in my repertoire. Cultures from the Indian sub-continent considerably influenced Javanese culture through religion, script and language.

What I had not known to exist were manuscripts of these tales. As it had largely been orally transmitted to me, with a romantic and naïve disposition I thought the dalang (master narrators/puppeteers) were keepers of these stories. Sung and retold passing down these tales.

Looking back, I suppose I felt the tales to be sacred growing up with immigrant Javanese grandparents.

Therefore, when I happened across the Southeast Asian Manuscripts Collections in storage, I welled up with emotion. It was to crudely put it ‘my blood line on a shelf’. I feel it my duty to share and celebrate this part of my heritage more; to enlighten people about its abundant culture and not simply resign it to the ‘exotic’, ‘mystical’ objects from the under-researched, lesser-regarded Far East.

Javanese manuscript structures have evolved throughout their history. The earliest recorded form is the palm-leaf manuscripts known as lontar (palm leaf), which was widespread in Southeast Asia, the materiality of which is discussed in detail in a previous blog.

Javanese MS 16 was written on laid paper; according to Ricklefs and Voorhoeve, Dutch paper and appears to be bound in codex form.

Prior to this, Javanese Paper, referred to as dluwang, a writing material used in addition to palm leaves, were the primary writing surfaces. Javanese Paper is made from the bast (inner bark) of the mulberry tree. The process is labour intensive; beating the bast, treating with rice water, drying the flattened fibres and later burnishing with cowrie or coconut shells to enable a smoother surface to write.

The bark of the tree was also used, while most often recognised as Austronesian craft largely to make bark cloth known as tapa, Javanese people also made clothing, housewares or as a substitute for leather with this material.

As luck would have it, there are examples of dluwang in our collections; fortunately, Javanese MS 6 is digitised in full.

By the 18th century, use of European paper gained momentum and prestige due to increased imports of Dutch made paper but was very expensive and could be difficult to procure. At the time when this manuscript was scripted, it was only the bigger Javanese courts, Dutch and British trading companies/colonists who could access and afford this.

The Tale in Three Images

These are the only digitised images from Javanese MS 16 and according to the catalogue record, illustrate the tale of ‘Raden Panji Smara Bangun’, though he is also known as Panji Asmarabangun. I have yet to consult this manuscript physically therefore can only infer that the princess in this tale would be Dewi Chandrakirana, as she features in the more well-known tales.

My observations are based on these digitised images bolstered by independent research and years’ old memories. While I can perhaps string a sentence or two together, enough to hold a conversation in Javanese, I am unable to read the script.

The first image is of a Karawitan Jawa (Javanese Sound Art). Karawitan typically accompanies performances and traditional ceremonies and is composed of a gamelan orchestra and singers.

In wayang, along with the Karawitan, the dalang narrates the story affording the characters’ voices and manipulates all the puppets.

Notice Batara Kala, God of time and destruction, discreetly peeping. An omen of misfortune or protection depending on how one wishes to view him.

The next image illustrates beautifully in wayang style, a scene in a Royal Court. Identified by the pattern on the cloth worn by the seated figure, which is the portrayal of persons of nobility, though whom this might be remains unclear. The character on the left seen here head-bowed could be our Prince, who is frequently depicted in his signature-curved headdress. Persons of higher status are usually illustrated highly stylised whilst commoners with realistic faces, compare this image with the gamelan performers previously.

The final image possibly portrays (on the left) Prabu Klana Sewandana a wanton King (Prabu) resolute to make Dewi Chandrakirana his wife. In wayang topeng, he is often portrayed by a red mask, and wiry moustache. The figure on the right resembles so much of Goddess Durga, Hindu Goddess and Mother of the Universe, yet another homage to the influences of Hinduism. Although in Java, she very much has her own distinct local identity and mythologies.

Much of Javanese literature is written in verse and meant to be sung, recited; think Dante’s Divine Comedy with its cantos and is more commonly written without page numbers. Pepadan (markers)are used instead, to indicate the end of a verse/canto. These markers would assist the singers when reciting, enabling them to invoke suitable feelings and emotions for the following verse(s).

In the Southeast Asian Manuscript Collections, we have several examples of pepadan as shown below:

The Tales of Panji have endured centuries of change throughout the establishment of what we know today as Indonesia. It is still present today in many aspects of Javanese and Indonesian culture, not just limited to the arts. His fame has spread throughout Indonesia, across the Malay Peninsula to other Southeast Asian nations; it has even been suggested that the cycle is taught in schools in Thailand. All this and only in 2017 that the Tales of Panji were recognised and listed under UNESCO’s Memory of the World Register.

The Tales of Panji are not mere love stories; they are allegories where Panji’s journey in search of Chandrakirana could be seen to represent the struggle, perseverance and success of the Javanese people to establish a unique identity.

This is only a snippet of the Southeast Asian Manuscript Collections, a rich resource revealing the cultures of the Indonesian archipelago and more. Considering the rarity of these objects, it would be a shame for them to remain under-studied and not more widely known.

For now, Panji remains safeguarded our stores, hopefully not too long before he can enchant us once again.