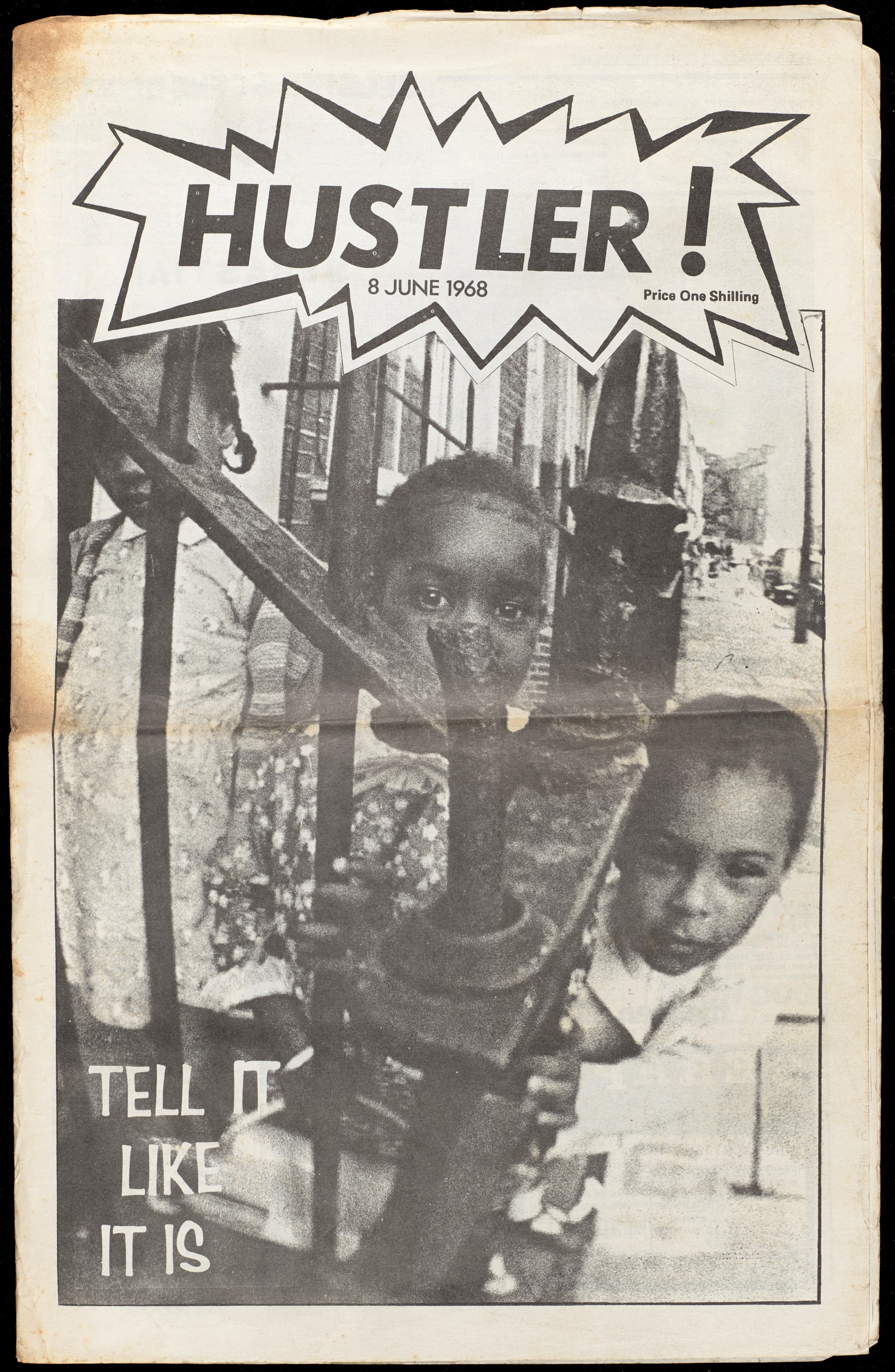 The Dave Cunliffe Archive held at the John Rylands Library is currently uncatalogued but holds approximately 5000 radical 1960s and 70s British and US periodicals including the second edition of Hustler. A fortnightly Black community newspaper first published in May 1968, it was initially edited by Courtney Tulloch from the Mangrove restaurant in Notting Hill. A small, flimsy journal of only eight roughly lithographed pages, it’s an important document because it features relatively rare coverage of the racism suffered by immigrants to the UK written by people who would become significant figures in the British Black Power movement. Frank Crichlow’s Mangrove effectively operated as a Black community centre and became the de facto office of the Notting Hill Carnival and it was also at the centre of a ground-breaking trial so a blog contextualising Hustler seems like a pertinent way to celebrate Black History Month.

Tulloch emigrated from Jamaica to join his family in Britain, arriving in Nottingham where he was mentored by author and activist Ray Gosling who was also friends with Cunliffe (which might explain why Hustler is in the archive). As a founder of the London Free School, contributor to alternative newspapers OZ and International Times (IT), teacher and initiator of black community work, Tulloch is also important because he connects the early British counterculture and Black Power movements. Sailing from Trinidad in 1953, Crichlow had some success with his band the Starlight Four using the profits to open the El Rio Café in Westbourne Park in the late 1950s. The nightspot attracted a lively mixed crowd which included Jimi Hendrix, author Colin MacInnes, the historian C L R James and the actor Diana Rigg and is probably most famous as the nightspot where Christine Keeler met her boyfriend ‘Lucky’ Gordon. Arriving from Trinidad in 1963 it was practically the first place a young Darcus Howe headed on reaching London, the club already being well-known in the Caribbean. Moving to the more upmarket Mangrove in 1968, Crichlow employed Howe and encouraged Tulloch to begin Hustler using the restaurant as its base.

Hustler is a mixture of local news and articles broadening the reader’s understanding of the worldwide Black Power movement within the historical perspective of the struggle against racism. There are reports of a police raid on the Belsize Club, community housing issues, an employment colour bar and racist violence in London and Wolverhampton. Alongside these are a review of a Black Power night at New York’s Fillmore East concert hall, the views of Black American poet and activist LeRoi Jones/ Amiri Baraka, the story of Jamaican slave Kitty Hilton, a preview of Michael X’s autobiography and a report on the leader of the National Socialist Party. Hustler also uses some aspects of the traditional press by including an astrological column, adverts for clothes and record shops, a crossword (albeit one with a Black Power theme) and the traditional sexist 1960s cartoon strip – Modesty Blaise with a voodoo slant. Interestingly the only contributor’s name appearing in this issue is that of Bruce Douglas-Mann, a white solicitor giving housing advice who would later become a Labour MP who often used his parliamentary platform to raise the plight of refugees. Later issues of Hustler (there’s a set in the George Padmore Institute – some visible online) include Darcus Howe’s by-line, writing under his actual name Radford.

In the US the Black Power movement grew out of civil rights activism whose figurehead Dr Martin Luther King Jr advocated peaceful civil disobedience to effect change across southern states and gain equal rights under the law. Originating in Oakland, California the radical US Black Panther Party was initially organised by Marxists Bobby Seale and Huey Newton in reaction to police brutality and as a means for black communities to organise their own autonomous welfare, education and security. Born in Trinidad and one of the original Freedom Riders who challenged bus segregation in the Deep South, Stokely Carmichael (who later took the African name Kwame Ture) was a significant figure within the Black Power movement and became the Honorary Prime Minister of the Panthers. When anti-psychiatrist R D Laing organised the Dialectics of Liberation conference at Camden’s Roundhouse it was Carmichael who flew to London to speak.

There had been attempts to politically organise within Britain’s African and Caribbean diaspora since the 1950s but it was Carmichael’s July 1967 Roundhouse speech which sparked them into action. An intellectual with the ability to deliver provocative, inspiring oratory he was feared by the British authorities, Special Branch warning Carmichael on his arrival not to outstay his welcome and he was banned from returning to the country after the conference by Home Secretary Roy Jenkins. Carmichael engaged with audiences of all backgrounds by using deeply considered logic and tonal changes to bring listeners closer at key points. The Nigerian born novelist, playwright and activist Obi B. Egbuna in his book Destroy This Temple: The Voice of Black Power in Britain (William Morrow & Co., 1971) describes the talk as the moment the movement coalesced while Howe (a childhood friend of Carmichael) was inspired to organise a fight-back against police racism and brutality in West London.

Although the political approach varied widely between different factions of the British Black Power movement, the overriding principle was that black people had the right to defend themselves, using force if necessary, and that they should challenge the idea that they were inferior to whites. In June 1967 Egbuna helped found and was elected the leader of the United Coloured People’s Association which, in response to Carmichael’s speech, expelled its white members and adopted the ideology of Black Power. After splits Egbuna established the British Black Panthers with the poet Linton Kwesi Johnson, activist Olive Morris and, according to some sources, Darcus Howe. However, research by the academics Robin Bunce and Paul Field claims that Howe formed his own group The Black Eagles after returning from the May 1968 Paris uprising, rather than joining the Panthers. The Eagles set out to ‘police the police’, members following patrols to ensure that no laws were broken and that black people were not harassed on the street. When two members were arrested and allegedly beaten up by officers Howe used Hustler and IT to report the events but the patrols ended soon after.

A few months after forming the Panthers Egbuna was charged with conspiring to incite the murder of police officers, Altheia Jones-LeCointe assuming the leadership. Bunce and Field’s research shows through archival evidence that Egbuna’s arrest was part of a concerted attempt by the authorities to halt the progress of the Black Power movement, Egbuna given a suspended sentence of three years. Originally from Trinidad, Jones-LeCointe was studying for a Biochemistry PhD at the University of London when she became active in feminist and Black Power politics. As a teacher she visited schools to talk about racism and recruited many new Panthers through public speaking engagements. Jones-LeCointe put women’s rights at the centre of the Black Power movement, challenging sexism within the organisation, educating members and putting in place measures against the exploitation or abuse of female recruits.

The other major figure in the British Black Power movement was Michael X. Michael de Freitas moved to the UK from Trinidad in 1957 and became an enforcer for notorious slum landlord Peter Rachman. Rachman sub-divided numerous Notting Hill properties and filled them with recent migrants from the West Indies who were often desperate for housing due to racist property owners (‘no blacks, no Irish, no dogs’ being a common sign in boarding-house windows at the time). Well-connected, he briefly had a record store on Ledbury Road with Scottish writer Alex Trocchi selling avant-garde jazz and, ridding himself of his slave name, Michael X became involved with various London countercultural groups including the London Free School with Tulloch. Under the name Abdul Malik, he founded the short-lived Racial Adjustment Action Society and a Black Power commune in Holloway Road but he was accused by other activists of violence and criminality and was shunned by many of those in the movement. Returning to the West Indies Malik was later found guilty of murder and hanged in 1975.

Subject to numerous raids ostensibly to search for drugs (although none were found), the Mangrove was under almost continuous police surveillance. Crichlow believed that the harassment was because the authorities didn’t like to see a successful black businessman with a white spouse who supported the Black Power movement, officers focusing their ire on the Mangrove in response. In protest at law enforcement behaviour, activists organised a march to the local police station during which fights broke out and several demonstrators (including Howe, Crichlow and Panthers Jones-LeCointe and Barbara Beese) were arrested and charged with incitement to riot.

Although he didn’t qualify, Howe had trained as a barrister and he attended and closely studied Egbuna’s trial in which he elected for a traditional defence with a white legal team. Howe’s demand that the ‘Mangrove 9’ be tried by a jury of their peers (i.e. an all-black jury), based on similar moves by US Panthers and on rights set out in the Magna Carta, was refused by the judge. In turn Howe and Jones-LeCointe defended themselves, dismissing 63 jurors in a successful bid to have some black representation on the jury. In a trial lasting 55 days much of the defence focused on evidence of police racism and brutality towards the black community which resulted in all the defendants being cleared of the main charge. The case is significant because it was the first judicial acknowledgement of Metropolitan Police racism which gained national media coverage and inspired others to take on the establishment in order to challenge prejudice.

So although a short-lived community newspaper with a small circulation Hustler illustrates how members of the Windrush generation battled prejudice on their arrival in Britain and a key moment in a legal fight to gain recognition of the inherent racism within British institutions, a campaign which continues today. Howe, Crichlow and Tulloch all became significant figures in the black rights movement: Howe, a combative media commentator who highlighted and fought against racism, became the editor of Race Today, a magazine representing British black politics. Chairman of the Notting Hill Carnival, Howe organised a large demonstration protesting against the handling of the New Cross Fire investigation, a disaster in which 13 black teenagers died. Crichlow began the Mangrove Community Association in response to the trial, establishing a youth group and advice service and he was also an important part of the Carnival. Charged with drug offences in 1979 for which he was found not guilty and again in 1988 in a raid which effectively ended the Mangrove (and that again found no drugs), Crichlow successfully sued the Met in 1992 and was awarded damages of £50,000. Tulloch helped co-ordinate Defense – a black legal advice project – and the People’s Centre which connected activists with the community, becoming a lecturer on youth and community work at Goldsmiths College, the first black academic in that school.

Obi B. Egbuna: Destroy This Temple: The Voice of Black Power in Britain (William Morrow & Co., 1971)