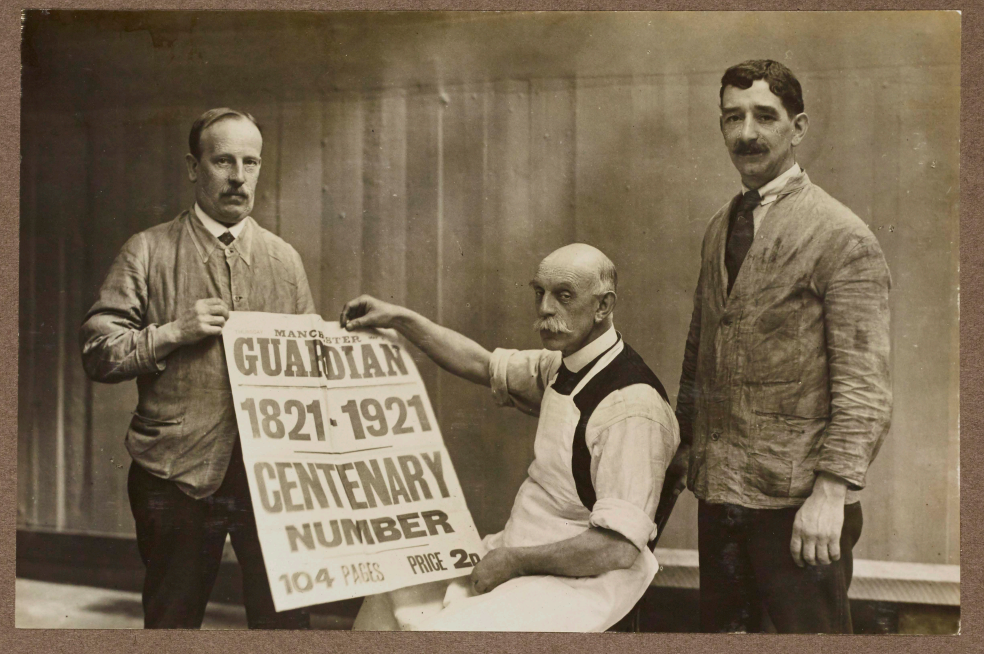 Hello! Our names are Kirat and Victoria and we are Masters students on the Art Gallery and Museum Studies course at the University of Manchester. We have the privilege of working with the John Rylands Research Institute and Library (the Rylands) for the next few months to create materials around the bicentenary of the Guardian Newspaper. While we remain cautiously optimistic on getting access to the beautiful neo-Gothic library this year, we’d like to share what we’ve been up to and what to look forward to once the John Rylands Library re-opens its doors.

A Beacon for the People

The Guardian was established in 1821 as ‘The Manchester Guardian’. The weekly newspaper which was founded by John Edward Taylor in the wake of the Peterloo massacre – a violent suppression of the public’s peaceful demand for electoral reform – took a liberal stance on social issues and continues to do so today.

‘Neither in what it gives, nor in what it does not give, nor in the mode of presentation must the unclouded face of truth suffer wrong. Comment is free, but facts are sacred.’- C.P. Scott

These words written by The Guardian’s legendary editor Charles Prestwich Scott are as urgent now as they were a hundred years ago when he penned his centenary essay. Scott’s 57-year tenure was significant in shaping the newspaper’s values and raising its profile to the world stage. Journalists of the time reported from all over the world on issues such as the suffragette movement and the Boer War; records of which are preserved in the Rylands archives in Manchester and at The Guardian News and Media Archive based in London.

To mark the bicentenary of this iconic institution the Rylands is developing an exhibition, ‘Manchester’s Guardian: 200 years of the Guardian newspaper’, and a variety of supporting events which are all due to take place later this year. Our roles are helping to bring the history of The Guardian archive to life; here is a bit of insight into how we are helping the Rylands team to do this:

The JRL has a strong focus on educational outreach, engaging with students from across Greater Manchester to increase visibility of its role and its collections. The Special Collections Medium pages are a rich repository of teaching material on subjects relating to Manchester, from ‘Politics and Protest’ to ‘Gender, Race and Disability’. As I’m interested in communications and outreach within cultural institutions, this is a fantastic opportunity to work alongside the teams at the Rylands and The Guardian’s Education Centre in London, and to create new content for teaching and learning.

My role will focus on creating teaching resources, in the form of blogs, around some of the incredible objects that will feature in the upcoming exhibition on The Guardian. The exhibition will be split into a series of themes with objects spanning the life of the newspaper. As you can imagine, having to choose which themes to talk about isn’t easy – they’re all fascinating in different ways. With each blog post, I’m aiming to create an interesting story which brings the objects to life, but also attempting to identify any potential links to the school curriculum, particularly for students at Key Stages two to four. Everything will be posted on the Special Collections website but, in the meantime, take a look at these stories on the Made in Manchester page and click on the links to find out more about the Rylands collections and The Guardian Education Centre.

‘The ‘Other’ Fleet Street’- Victoria Davies

As a celebration of The Manchester Guardian’s bicentenary and in addition to the upcoming exhibition, I will be researching and (hopefully) leading a guided tour around key sites in the city centre that help tell the story of The Guardian and its legacy here in Manchester. As a student at the University, I was thrilled to be involved in such an extensive and dynamic project centred around my hometown. The placement allows us to explore the vast archival material of the Manchester Special Collections at the Rylands and investigate a surprising chapter of the city’s history that I had otherwise never considered. Mostly, I’m eager to gain experience in exhibition production with the fantastic collections and visitor engagement teams at the Rylands, so I am thrilled to be able to contribute to the celebration of The Manchester Guardian’s bicentenary by researching and curating my own project.

Manchester has always been at the forefront of innovative thinking, and its relationship with news printing is no exception. The Manchester Guardian was first published in 1821 as a response to the shift in political climate catalysed by the tragic events at Peterloo and operated as a platform for the mercantile class. My intention with this project is to create something of a tribute to these people and the newspaper. I aim to do this by bringing attention to the buildings around Manchester that accommodated its creation and contributed to the pioneering voice the city is still known for today.

Though the Guardian headquarters moved operations to London in the mid 20th century, the echoes of social revolution remain in many city-centre locations that once housed the people and production of this iconic newspaper. I believe revisiting and paying homage to these sites will provide an inspiring glance into an otherwise hidden but vastly rich social history. From reporting and manufacturing to printing and selling, my goal for this project is to provide an informative tour that preserves the buildings’ memory and celebrates their critical role in establishing Manchester as a city of the people and their ideas.

Depending on the social restrictions in place, my walking tour should accompany the exhibition in 2021. Hopefully, I will provide some insight into the history of buildings we might otherwise take for granted around our thriving city in a fun activity to support the exhibition at the John Rylands Research Institute and Library.

We look forward to sharing more of our work with you in the coming months. See you soon!

2 comments on “Celebrating 200 years of the Guardian Newspaper”