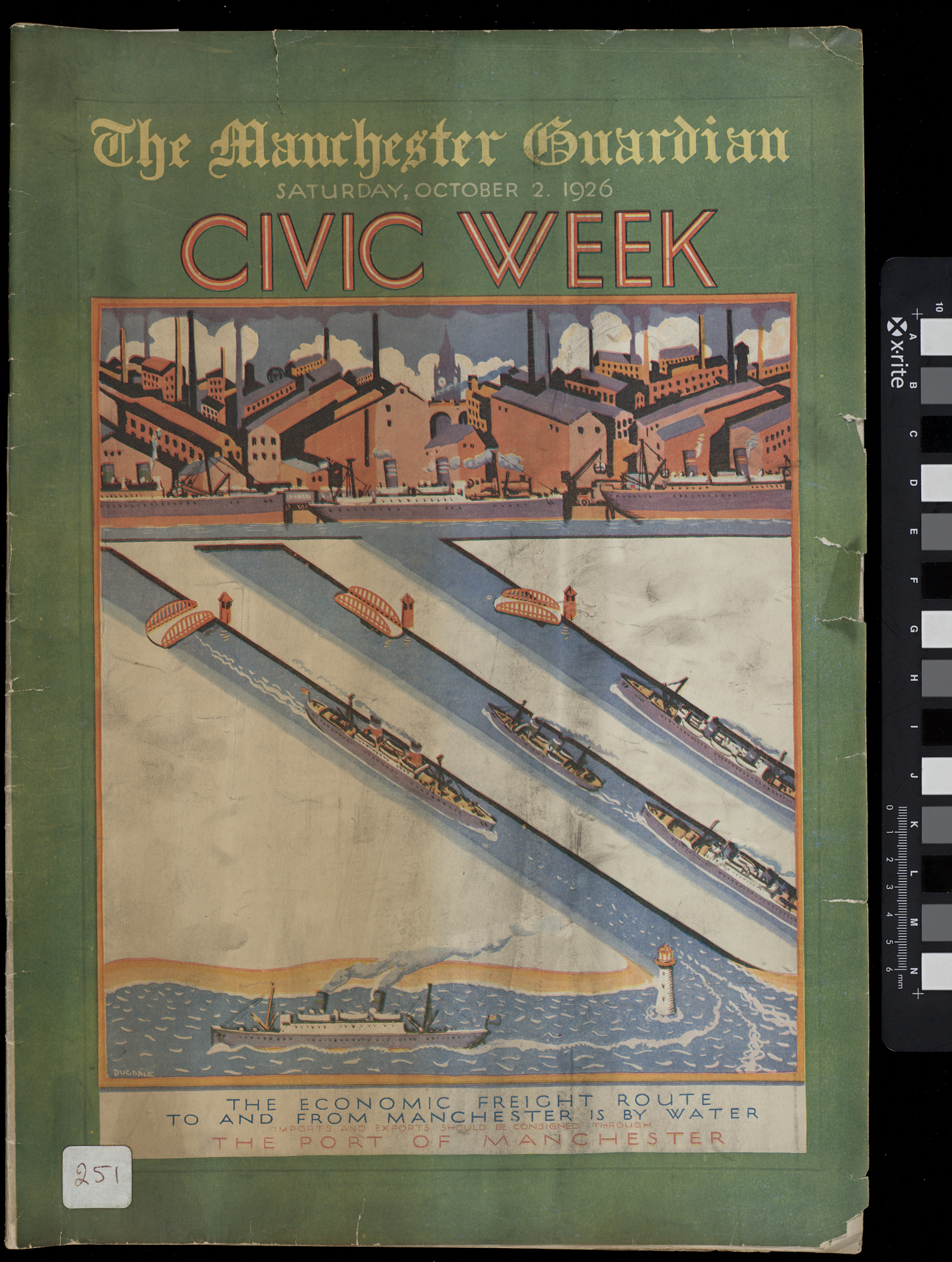 Those words from the Lord Mayor of Manchester introduced the Manchester Guardian’s Civic Week Number from 1926, commemorating the festivities in the city from 2nd – 9th October. Civic Week was organised by the Manchester Corporation in alliance with prominent figures and bodies from across the city. It would be a celebration of Manchester in the whole – commercial, cultural, and municipal – all suffused with a pride in its history and tradition.

It was to involve the whole community, opening up its institutions to the public; its manufacturers were to parade through the city, inviting visitors to inspect their premises; and a magnificent historical pageant featuring over two thousand performers would take place at Heaton Park.

Manchester’s progress would be celebrated, its finest buildings illuminated at night, and a sense of municipal pride planted among the citizenry. ‘There will be few closed doors in Manchester’ announced the Guardian editorial on its opening, ‘trespassers will not be prosecuted, they will be welcomed’. That Liverpool had recently staged not one, but two successful similar events was not mentioned. However, Manchester could not allow that to stand unchallenged.

Yet this was also an uncertain period for the city. Its dominant cotton industry was in clear decline, and preparations for the week themselves were interrupted by the General Strike and a coal shortage. Against this, Civic Week was an attempt to bolster the city’s confidence. Through the celebration of the past and affirmation of the present, it might offer assurance for the future.

The number was published on Saturday 2nd October, the first day of festivities, at the ‘usual’ price of 2d, and featured a variety of contributors. Alongside the regular Guardian staff such as William Haslam Mills, Allan Monkhouse, and Gordon Phillips (‘Lucio’), there were submissions from former Prime Minister David Lloyd George and actress Sybil Thorndike. Local institutions were also well represented, including representatives from Manchester University, the Chairman of the Manchester Chamber of Commerce, and the Master of the [Royal] Exchange.

The publication expresses the ambitions and apprehensions of the age, with the adverts in particular offering a sense of the city’s still considerable industrial and commercial power. A particular highlight is the Map of the City of Manchester by ‘w.m’. Dominated by the red lines of the city’s tram network, it would aid visitors to see the week’s attractions which were dispersed across the city.

Even the quickest inspection reveals a mass of detail, both informative and irreverent. Equal prominence is awarded to the industrial and cultural, the educational and commercial, with the Cross Street offices of the ‘M.G’ sitting at the heart of the map. Boggart Hole Clough’s boggart makes an appearance too.

The extent of Manchester’s municipal influence is demonstrated over the whole city, its tram network, electricity stations, gas network, waterworks, and new housing estates are all depicted. Among the first adverts featured are for Manchester Corporation’s utilities services, electric and gas, offering liberation from coal and great improvements to domestic life:

“Remember that the only human energy required is the pressing of a switch, ELECTRICITY DOES THE REST”.

The city’s textiles industry is well represented. As part of Civic Week, the Manchester Guardian Commercial organised a textile exhibition at Belle Vue, to provide a central showcase for the city’s most important trade. Given the industry’s difficulties it was run strictly on a non-profit basis, attempting to encourage as broad a turnout as possible. It would open with an Historical Costume Pageant, and a special theatre was erected in which there were several daily mannequin parades.

Clear, too, is the hope the city invested in the Manchester Ship Canal. Times were challenging for the cotton industry after the First World War, with an underlying knowledge that things would never be the same again but an earlier Mancunian resolution had transformed the inland city into ‘the fourth port in the first maritime nation on earth, with great industrial works rising at the dockside in Trafford Park’:

We see evidence of Manchester as a regional banking sector, with each bank publishing its capital and reserves.

As expected from a Manchester Guardian publication, there is fierce pride in the city’s liberal tradition and the independence of its institutions, articulated here by Professor H.B. Charlton:

“The Grammar School, Chetham’s Hospital and Library, the University, the College of Technology, and our Corporation’s Central Schools are more than local institutions: they are historical monuments testifying to the continuity through four hundred years of a tradition which is so strikingly consistent in its quality that it can rightly be called the Manchester policy in education.”

While Gordon Phillips in “Sans Changer” pays tribute to the John Rylands Library:

“In the world of scholarship that quiet building in modern Deansgate ranks as a capital city, and the learned of all countries looks towards it with admiration. Geographically it is in Manchester, but in the realm of ideas it belongs to the world.”

A less serious note is struck in ‘Where We Live: A Survey of the Suburbs’:

Ardwick has affinities with those who understand rascality. Behind it and stretching away to Oxford Road is the Bohemian quarter of the city… It is a quarter that knows foreigners and yet does not heave half a brick at them. It is tolerant.

Civic Week also spawned an Official Handbook featuring sixteen photographs by Alvin Langdon Coburn, who allowed their free reproduction for the rest of the year. The Manchester and Salford Woman Citizen also produced its own Civic Week edition, with a column in the Guardian noting how they ‘celebrated the spirit of Civic Week all the year round’.

Closing the article on ‘The Port of Manchester and Its Industries’ was an apposite quotation from Manchester poet and shorthand pioneer, John Byrom (1692–1763):

“We look upon ourselves as shareholders in the good ship Manchester, and whenever we apprehend her in the least danger are ready to work as hard as if we were no inconsiderable sharers in her cargo.”

The Civic Week Number has been digitised in full and can be viewed online here. If you wish to find out more about the Guardian Archive, you can access the online version of our bicentenary exhibition ‘Manchester’s Guardian: 200 years of the Guardian newspaper’ here or come and visit the John Rylands Research Institute and Library to see the physical exhibition this summer.

Check our events and exhibition page for details on current opening hours.

Wildman, Charlotte, Urban redevelopment and modernity in Liverpool and Manchester, 1918-1939

2 comments on ““The world has a right to know what we are doing and how we are doing it.” -Manchester Civic Week”