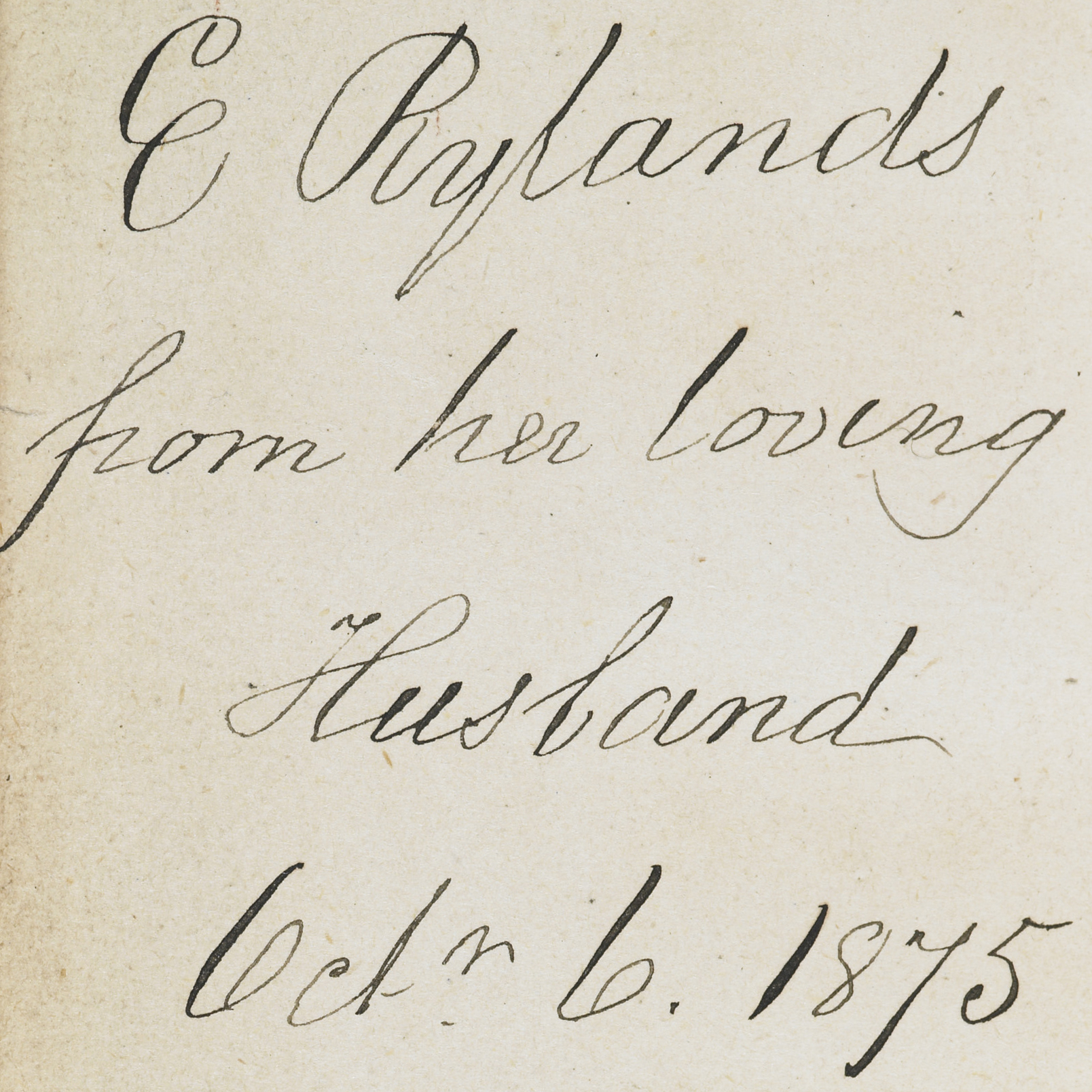 By Elizabeth Gow, Special Collections Manuscript Curator and Archivist. The Rylands Reflects series explores the history of the John Rylands Library, our collections, and our current practice as heritage professionals in the context of racism, colonisation and representation of marginalised groups

Today is the anniversary of the inauguration of the John Rylands Library on 6th October 1899. October 6th was also the anniversary of Enriqueta’s marriage to John Rylands in 1875. On their wedding day, John inscribed a bible to his new wife, carefully marking the special date. This post reveals some hidden histories of John and Enriqueta by taking a closer look at their special day.

6th October was the date when English Protestants commemorated the martyrdom of their hero William Tyndale, who translated the bible into English. If this was a coincidence, it was an appropriate one for the bible loving couple. The Library Enriqueta founded in memory of her husband devoted special attention to Tyndale and the bible (see Tyndale Treasures). Everything seems to line up with the story we tell about the grieving widow who founded the John Rylands Library in memory of this staunchly Protestant Manchester man. It is easy to assume that in marrying John Rylands, Enriqueta Tennant had left behind the Cuba of her early childhood. A closer look at their wedding day, however, reveals continued and active connections between Enriqueta and her Creole family.

This story doesn’t take place in Cuba, nor in Manchester, but in the expensive London district of Kensington. Enriqueta had been living at Longford Hall, near Manchester, as companion to John’s second wife Martha, who died in February 1875. A few months after Martha’s death, John purchased a grand mansion in South Kensington – 67 Queen’s Gate. Queen’s Gate became John and Enriqueta’s London residence. It was opposite the Natural History Museum and close to the new cultural attractions of the South Kensington Museum (now the Victoria and Albert Museum) and the Royal Albert Hall, where they owned a private box. John and Enriqueta were married later the same year at Kensington Congregational Chapel (now the United Reformed Church). But neither registered their address as Queen’s Gate. John was apparently living at 46 Argyll Road, another house he had leased since 1871. Enriqueta gave her address as 54 Palace Gardens Terrace. (Neither were quite as grand as 67 Queen’s Gate, unfortunately destroyed during the Second World War.) The address Enriqueta gave provides clues to the continued intimacy of her ties to Cuba.

On 6th October 1875, 54 Palace Gardens Terrace was the home of Enriqueta’s youngest sister Leocadia. Leocadia was living with her husband Alexander Morison, their baby daughter, and her mother-in-law Adelaide. (When Enriqueta died in 1908, her niece Leocadia Adelaide was at her side.) Through business and marriage in Cuba and Britain, the Tennant and Morison families were intimately connected. Indeed, a family wedding provides the earliest written evidence connecting Enriqueta to John Rylands. In February 1869, they both witnessed the Liverpool marriage of Blanca Tennant (Enriqueta’s sister) to Robert Bruce (Alexander’s cousin and brother-in-law). Alexander’s father is mentioned in Our Man in Havana, a post about Stephen Cattley Tennant and British business interests in Cuba. But it is Alexander’s mother, Adelaide Morison, who carries our story from Cuba to New Orleans.

Vicente Adelaide Maria Deville De Goutin Bellechasse, known as Adelaide, married Robert Morison in Cuba in 1820. Like Enriqueta and her siblings, their children grew up in Havana and in Matanzas, an area known for its exploitative sugar industry. Adelaide was not Cuban – she was born in New Orleans about 1800. When Adelaide was young, her French Creole family moved to Cuba. The move was probably a reaction to the 1803 Louisiana Purchase, when the United States bought the territory from France. The first of the family born in Cuba was Adelaide’s cousin Camila Dalcour – Enriqueta’s mother. Camila and Adelaide’s fathers each owned a third of the Matanzas sugar plantation ‘La Reunion Deseada’ (the other share belonged to Camila’s maternal grandfather John Forbes). Family ties were cemented by the marriage of Camila’s sister Sophia to Adelaide’s brother Juan Luis. Yet the left-hand side of the tree shows a branch of the family that stayed in New Orleans, and whose story reveals a previously hidden aspect of Enriqueta’s family heritage.

The photograph above shows a New Orleans property belonging to Etienne and Adelaide Dalcour (at the top of our family tree). It was perhaps the home of Enriqueta’s second cousin Pierre Dalcour (born 1813), a well-regarded New Orleans poet. Pierre Dalcour corresponded with famous French writers like Alexandre Dumas and Victor Hugo. But whereas his cousins were part of a white Creole elite, Pierre was the grandson of Pierre Etienne Dalcour (Enriqueta’s great uncle) and Angelique Aury, a free woman of colour. The property was given to Pierre Etienne and Angelique’s children by their aunt Adelaide and uncle Francisco in 1808. This may have been when Adelaide and Francisco left New Orleans for Cuba. Pierre’s family was wealthy enough to send him to France for his education. In Paris, Pierre escaped – at least temporarily – the racial division and oppression in New Orleans. The date of Pierre’s death is unknown, but he left a lasting legacy.

Les Cenelles, a collection of poems by Creole writers of colour was printed in New Orleans in 1845. The first and last poems were by Pierre Dalcour, showing how much his contemporaries valued his work. Inspired by the French Romantics, Pierre’s poetry told of love and personal anguish but also cried out against the silencing of people of colour in nineteenth-century America. Les Cenelles is now recognised as the first ever African-American literary anthology, and a modern edition can be found in the University of Manchester Library. While Enriqueta Rylands did not include her cousin’s poetry in the library she founded, we are excited to share this small fragment.

David Barry Gaspar and Darlene Clark Hine. Beyond Bondage: Free Women of Color in the Americas. University of Illinois Press, 2004.