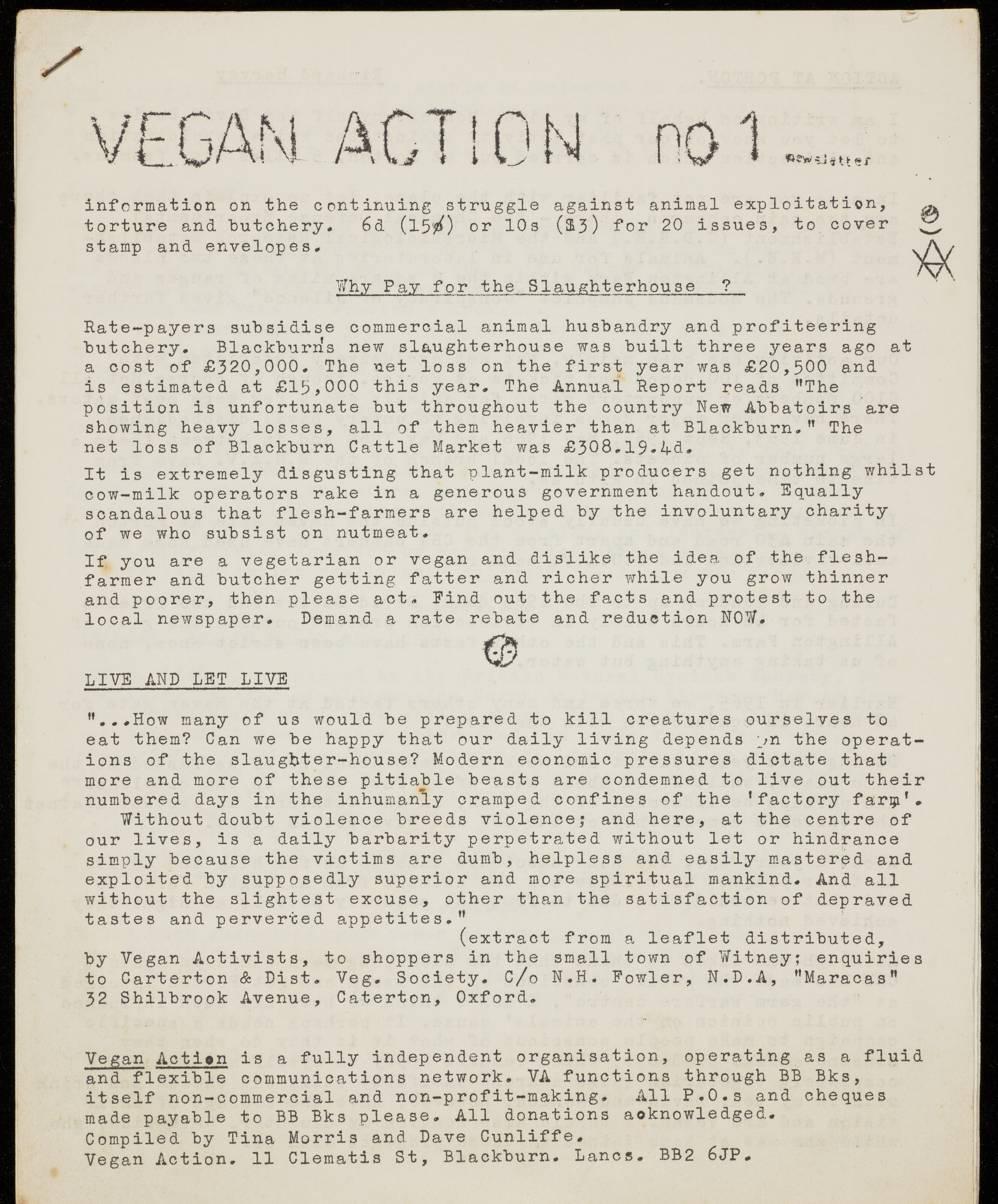 From the early 1960s Dave Cunliffe and Tina Morris ran a small press which they used to produce poetry publications alongside political material which included environmental flyers, posters, stickers and newsletters. They operated initially from a terraced house in Blackburn, Lancashire, and then an old farmhouse in a village on the outskirts of the town. The couple published 13 issues of Poetmeat magazine between 1963-67, which gained recognition for its coverage of young US and British poets (Diane di Prima, Carol Bergé, Penelope Shuttle, Lee Harwood, Chris Torrance etc.) who would later become better-known. The verse of Tina and Dave also achieved some renown, published in Children of Albion: Poetry of the Underground in Britain (Penguin, 1969) edited by Michael Horovitz and considered to be the definitive collection of the British Poetry Revival. It is, though, the items that they produced in support of veganism, animal rights and ecology on which we concentrate here.

In 2017 the University of Manchester Library Special Collections acquired Dave Cunliffe’s large archive which contains thousands of poetry and countercultural publications, correspondence and related ephemera which includes many anti-racist, pacifist and environmentalist items. Morris volunteered in the Manchester office of the Campaign for Nuclear Disarmament in the early 1960s while Cunliffe was part of the Committee of One Hundred, a non-violent but more radical CND offshoot whose members took direct action, blockading air bases and the Ministry of Defence. Committed anti-racists and supporters of the more militant elements of the US civil rights movement, they corresponded with and published material from the Black Panthers including the young lesbian poet and activist Pat Parker.

Dave and Tina loved nature and they read about ecology, environmentalism and sustainability in literature that they received from the United States which had groups (particularly in California) already highlighting the damage that air and water pollution were doing to the planet. They became vegans, removing meat and dairy from their diet and used only man-made products for their clothing and in their home. The couple believed it morally wrong to kill other animals and they were beginning to understand the harm that large-scale farming does through land clearance for livestock and in the use of chemicals on crops and cattle. Veganism and anti-consumerism would have been a very unusual lifestyle choice in the early 1960s, not too long after war rationing had ended and when many products which we now take for granted were just becoming available (although often still too expensive for most) such as televisions and telephones. At a time when people were excited by a whole new world of goods and gadgets and diets were becoming more varied, it would have seemed very unusual to argue against the use of animal products or materialism. Few people understood the damage done to the atmosphere by manufacturing processes, meat consumption or when driving a motor car, so it would have seemed quite eccentric to campaign on those issues.

The beauty of nature and the delicate balance of economy versus ecology seeped into the writing and verse of Cunliffe and Morris and they used their press to produce material advocating veganism and low-impact consumerism. They formed the Global Tapestry environmental group which picketed abattoirs, butchers’ shops and market stalls, handing out anti-meat literature and at weekends they walked out into the Bowland hills where they smashed-up shooting lodges. The couple stood outside Blackburn Cathedral’s busy Christmas Day service passing parishioners the leaflets visible here: ‘Would Christ Have Wrung the Neck of a Turkey’ and ‘Happy Birthday Jesus, Happy Death-Day Turkey’. They used Poetmeat and their literary newsletter PM News to connect activists with groups and collectives by publishing contact details and encouraging readers to collaborate. They networked with anti-vivisectionists, hunt saboteurs and communes committed to living meat-free lifestyles in order to spread the idea of low-impact lifestyles as part of a broader environmentalism.

As their verse and publishing gained momentum, Tina and Dave travelled the country to read and talk about their magazine and they built a network of like-minded experimental poets and activists. The co-editors gained admirers amongst early British environmental campaigners who could see that they went beyond merely writing about ecology; they also used their press to connect and inspire others and were prepared to use direct action for the cause. They became good friends with John Papworth, a clergyman who was an anti-nuclear and environmental crusader (later accused of hiding the escaped spy George Blake) and they stopped in his London home and Dorset cottage. During these visits they were introduced to the economist Leopold Kohr and the activist, author and monk Satish Kumar who, with Papworth, believed that the only sustainable economy is one based on localised, small-scale trade based within and serving the community. These ideas fed-into those of the Lancastrians but what Papworth, Kumar and Kohr were interested in was how to develop a magazine and Cunliffe and Morris were able to provide first-hand experience of launching a periodical. Their assistance would help the beginnings of Resurgence environmental magazine in 1966 and which still runs today as the now merged Resurgence & Ecologist magazine.

In 1965 Cunliffe was involved in an obscenity trial which many on the left saw as an attack on freedom of speech and an attempt to halt their increasingly high-profile activism rather than one based on the contents of the publication. Although Dave and Tina effectively won the case, they were left with substantial court costs and continuing police harassment while Cunliffe believed that their mail was monitored by the authorities. It is in these circumstances, under pressure to give up their activism and press, that in 1968 they began to publish Vegan Action newsletter. This separated out their environmentalism from their poetry and other political interests to feature in-depth analysis of green issues and it advocated direct action which was sometimes illegal. Publishing these ideas while aware that they were almost certainly under surveillance was a brave commitment to a cause particularly when (as Morris now admits) the police raids were terrifying. Despite these worries they printed information about vivisection at the Government’s highly secretive Porton Down chemical weapons establishment and the farm which supplied the animals used in experiments. In a period long before the internet, often the only way to find out about government activities was via radical magazines and newspapers like Vegan Action which were prepared to share this kind of information. They printed the names and addresses of convicted animal abusers and articles written by fellow environmental activists. Issue 3 features a long editorial which places veganism at the heart of the revolutionary struggle against racism, colonialism and war in what they describe as the ‘Liberation of All Beings’.

Although Morris later published several Vegan Recipe freesheets, after three issues Vegan Action was rolled-into their new Global Tapestry magazine which contained mostly poetry but continued (at least initially) to feature environmentalist material often written by Tina. She used her verse to teach children about nature, visiting schools across Lancashire over the next two decades. Cunliffe was involved in early protests against the building of the M65 motorway, using his press to highlight the damage that the road and ensuing traffic would do to the local environment which helped to force the government into a public inquiry. In the 1970s and 80s Cunliffe was almost entirely self-sufficient with a large vegetable patch in the garden of his cottage, an industrial-scale home-brew kit and a greenhouse where he grew more ‘exotic’ plants. As the need for climate action reaches a critical point it’s worth remembering that there are some who have campaigned on the issue for over 50 years and this material is evidence of that activism.

0 comments on “Global Tapestry and Vegan Action: Environmental activism in the 1960s”