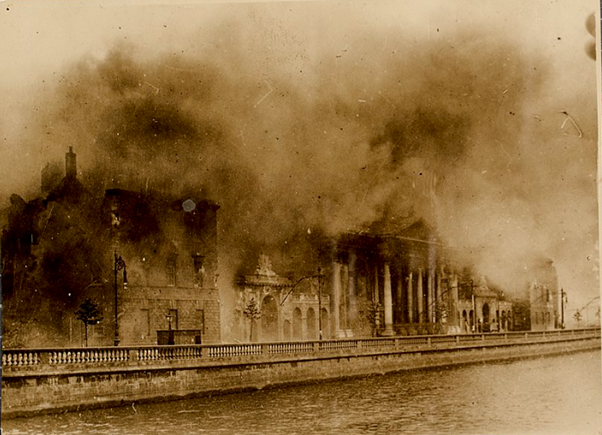 After the Irish home rule debates in the 1880s the Manchester Guardian and its editor, C. P. Scott, emerged as the voice of liberal England. The Guardian Archive at the John Rylands Research Institute and Library is, therefore, infinitely valuable to researchers interested in British liberal thinking in the late nineteenth and early twentieth centuries.

As outlined in this previous blogpost, the Irish question was the defining issue for the Manchester Guardian in its 200 year history. On the centenary of the outbreak of the Irish Civil War, Dr Kathy Davies returns to C. P. Scott’s editorial commentary to illuminate British liberal opinion on the conflict.

In 1921 the Irish War of Independence (1919-1921) and peace negotiations between British and Irish delegates concluded with the signing of the Anglo-Irish Treaty. The Treaty dissolved the union between Southern Ireland and Britain and established the new Irish Free State as a Dominion within the British Empire, rather than a part of the United Kingdom. It also reaffirmed the partition Northern Ireland, which was implemented following the Government of Ireland Act 1920.

Although the Guardian opposed Irish partition, C. P. Scott was very supportive of the Treaty. Scott was sympathetic toward Irish nationalist desires for more political autonomy, within moderation. In his view, the Treaty offered Irish nationalists a reasonable constitutional solution (rather than revolutionary) to their grievances. It granted ‘practical independence’ while maintaining British imperial authority and ‘the unity of the realm’. Scott believed the Treaty signalled a new era of peace between Ireland and Britain.

The Anglo-Irish Treaty did not mean peace in Ireland itself. The terms of the Treaty, particularly continued Irish subordination to the British King and Empire, divided Irish nationalists. In June 1922, these divisions erupted into a violent civil war between the National Army of the Free State and an anti-Treaty faction of the original Irish Republican Army (IRA).

The Guardian had expected some opposition to the Treaty. Editor Scott acknowledged the generations of struggle for Irish freedom and the ‘embittered strife’ faced during the War of Independence as reason for this. But Scott also suggested that divisions were caused by the political inexperience of Irish leaders. Scott maintained:

‘To us in this country, trained in affairs and accustomed always to look at the substance rather than the form in all political arrangements, the choice may appear easy; to a country emerging from revolution it may present itself in quite another light.’

The Guardian contrasted the Irish parliament ‘largely made up of young men and almost wholly of men inexperienced in affairs’ with the British parliament, which was upheld as the archetype of liberal democracy.

‘not only a patriot but a statesman’

Despite maintaining the overall inexperience of the Dublin parliament, Scott praised Irish leaders who supported the Treaty. The Guardian celebrated Arthur Griffith in particular. Griffith was the founder of Sinn Féin and the leader of the Irish delegation who negotiated and signed the Treaty. The Guardian described Griffith as ‘not only a patriot but a statesman’. When Griffith died of a heart attack in August 1922 Scott blamed the ‘immense labour and anxiety imposed on him’ by anti-Treaty forces.

‘a straightforward and quite agreeable savage’

The Guardian also gave favour to Michael Collins, who was Director of Intelligence for the IRA during the War of Independence and leader of the Provisional Government of the Irish Free State from January 1922. But Scott’s commentary on Collins also propagated ideas about Irish ‘national character’, a common trope in British colonial discourse. The Guardian described Collins as ‘a straightforward and quite agreeable savage’, and after he was killed in an ambush by anti-Treaty forces, Scott suggested that it was an ‘element of recklessness, native to the Irishman and intensified no doubt in him by years of peril and adventure, which probably is in part responsible for his death.’ Scott’s descriptions of Collins were part of a broader up-trend of colonial discourse relating to Ireland in the Guardian in 1922.

In contrast to Arthur Griffith and Michael Collins, Scott heavily criticised anti-Treaty republican, Éamon de Valera, who was President of the self-declared Irish Republic during the War of Independence.  Scott argued that in supporting the anti-Treaty forces de Valera was responsible for entrenching further division in Ireland. The editor maintained:

‘The chief crime of Mr. De Valera and his party against their country is that they have been apostles of disunion, that they have riven their own party and split Ireland as a whole more deeply than ever in two.’

A damning statement, published alongside the accusation that de Valera feared the abandonment of the republican cause by the Irish people. The editor also drew comparisons between the anti-Treaty republicans and the anti-Treaty unionists in Britain and Northern Ireland for their ‘uncompromising’ stances.

Scott’s editorial commentary in 1922 attempted to address the reasons for civil war in Ireland in a way that avoided blaming the Treaty, even though its terms were at the heart of the conflict. Scott wanted to maintain the pro-Treaty line. As well as highlighting Irish political inexperience and ‘national character’, the Guardian argued that a long-standing climate of division and an aversion to authority bred under British rule were the reasons for the ongoing violence.

The Guardian insisted, however, that Britain stay out of the conflict. The newspaper maintained that ‘Englishmen are now merely sympathetic spectators’, because for Britain and its Empire the Irish question was ‘solved’. Ireland’s fate was ‘at last securely in the hands of Irishmen and well out of ours’.

The final editorial that C. P. Scott wrote on Ireland during the revolutionary decade was published on 29th May 1922, four days after the civil war ended. Under the heading, ‘Peace at Last in Ireland’, Scott stated that ‘after eighteen months of bitter domestic strife, Ireland is to be permitted once more to live her own life and govern herself as the vast majority of her people have determined’. The Guardian still believed the Irish Free State had one more victory to achieve – unity with Northern Ireland – but after the suppression of the anti-Treaty opposition Scott believed unity was possible. Scott’s final editorial recognised that ‘Ireland has suffered grievous hurt’ but maintained that ‘today she enters a new chapter of her history’.

The Irish Civil War was fought over the terms of the Anglo-Irish Treaty that were signed in London by British and Irish representatives in December 1921. C. P. Scott used the Guardian to promote the Treaty and maintained his support for the terms of agreement during the subsequent conflict. The Guardian favoured pro-Treaty nationalists and censured anti-Treaty republicans, while attempting to dissociate the Treaty from the violence. As such, the victory of the pro-Treaty Free State forces in May 1923 was welcomed by the voice of liberal England. Hopes for Irish reunification remained, but was recognised as a future to be decided by Irish people themselves.

You can access C. P. Scott’s editorial cuttings books (GDN/75-78a) and other items in the Guardian Archive in our modern reading room. See here for more information on arranging a visit.

Gibbons, Ivan, Partition: How and Why Ireland was Divided (London, 2020)

0 comments on “Liberal England and the Irish Civil War”