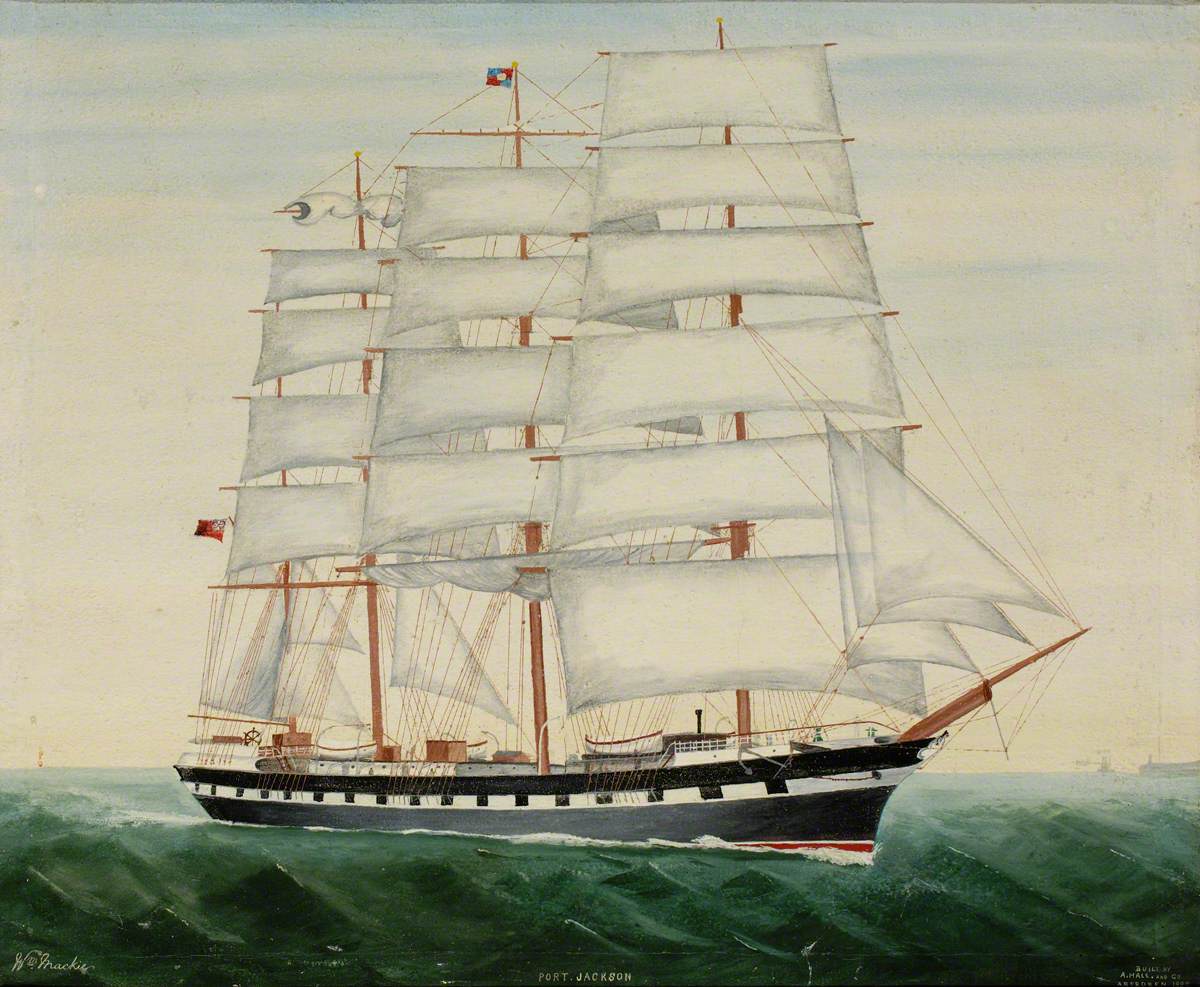 In the museum is a case of instruments that belonged to Dr Clifford Hall (1885-1979), surgeon on board the sailing ship Port Jackson. This item is a link to the era of the great sailing ships, adventures of a young ship’s doctor and the horrors of World War One.

The Port Jackson was built in 1882 by Alexander Hall & Sons Ltd in Aberdeen. Between 1907 and 1917 she worked as a sea-going cadet training ship. The National Maritime Museum has a journal by Alfred Frank Duprey, a passenger in 1913. His entry for Saturday 13 September testifies:

‘The Port Jackson has fine lines, as those who have seen her in dock in Sydney assure me, is very different to the modern tanks now built. Speed was a consideration in 1882 and she moves along at 5 knots with hardly any breeze.’ (JOD/2;LOG/M/13)

On 28 April 1917, the Port Jackson was torpedoed and sunk by a German submarine in the English Channel. The Captain and 13 of its crew were killed.

Clifford Hall entered the Manchester Medical School aged 19, qualifying in 1910. He became Medical Officer on board the Port Jackson between August 1913 and July 1914 on its round journey to Australia. Duprey’s journal noted that on 22 November ‘the doctor performs operation on Wingrove’s knee and gave chloroform.’

Duprey himself was also attended to by the doctor. ‘I cut my head open on the companion clock, running down to breakfast. Not much damage. The Dr shoved on a little iodine, and I soon forgot all about it.’

Duprey also records that the doctor was involved in teaching the cadets First Aid and ‘bandaging’. The Port Jackson arrived back home on 10 July 1914 and the First World War began two weeks later.

Before joining the Port Jackson Dr Hall had worked as an Assistant Medical Officer at the Camberwell Union Infirmary and as a Senior House Officer at the South Shields Infirmary. During WW1 he was Assistant Superintendent at Hope Hospital in Salford. His father and grandfather were general practioners in Stoke and after the War Clifford settled into the practice and later became County Medical Officer for Staffordshire.

His nephew, Geoffrey Hall, who also trained at Manchester, inherited the case of instruments. In his donation letter to the museum dated 1980, he wrote:   ‘My aged Auntie tells me that my uncle went to sea for the sole purpose of seeing the world before settling down to routine work as a County Medical Officer.’

The set of instruments is in a wooden case measuring L43cm x W19cm x D11cm. Clifford’s set does not match any of the ‘standard’ sets from the Down Brothers’ catalogue, an industry setter. He may have acquired an older, incomplete set and added instruments to it. Some instruments such as the trephine, torniquet and scissors are missing, those remaining in the case are listed below. In addition to his surgical set he would have had a stethoscope, thermometers, chloroform, bandages, etc.

For Dr Hall, apart from the knee operation, most medical problems would have been minor. However, he would have been prepared to deal with a serious accident such as a head injury or crushed limb. Clifford kept the same case of instruments throughout his career. It is unlikely that he would have had reason to use them in the family practice, but they could have been a souvenir and reminder of his maritime experience.

Clifford Hall went to sea for adventure. Amongst the papers is a copy of a well-known sea-shanty, often called “Away Susanna”, “New York Girls”, or “Seafarers”, handwritten on the back of a Medical Officer’s report, perhaps copied so he would know the words and join in with the sing-song. As Duprey recorded in his journal on 13 April 1914: ‘We celebrated the Doctor’s birthday after dinner and had the last two bottles of port they have got left in the ship. Our musical party afterwards was a rather merry one’! (1)

During the twentieth century, it was not uncommon for a young doctor to ‘sign-up’ as a ship’s doctor on a passenger or cruise vessel – a well-paid post and a chance to see the world. World medicine and humanitarian causes can still offer opportunities for experience: UK-Med was founded in 1988 by Tony Redmond OBE, Professor of International Emergency Medicine, to respond to natural disasters and medical crisis. For example, when Ebola hit West Africa in 2014, 150 NHS clinicians were deployed alongside local health workers to deal with outbreak.

The case of instruments is an interesting museum object but not pristine or valuable. Its value and interest (like many museum objects) lies in its backstory: the experiences of a young doctor’s voyage to Australia on one of the last iron sailing ships – a great adventure and a snapshot of the colonial, medical and nautical world just before the Great War.

Stephanie Seville, Heritage Officer for the Museum of Medicine and Health

A full article about Dr Hall will be published in the Bulletin of the Historical Medical Equipment Society in August 2022.