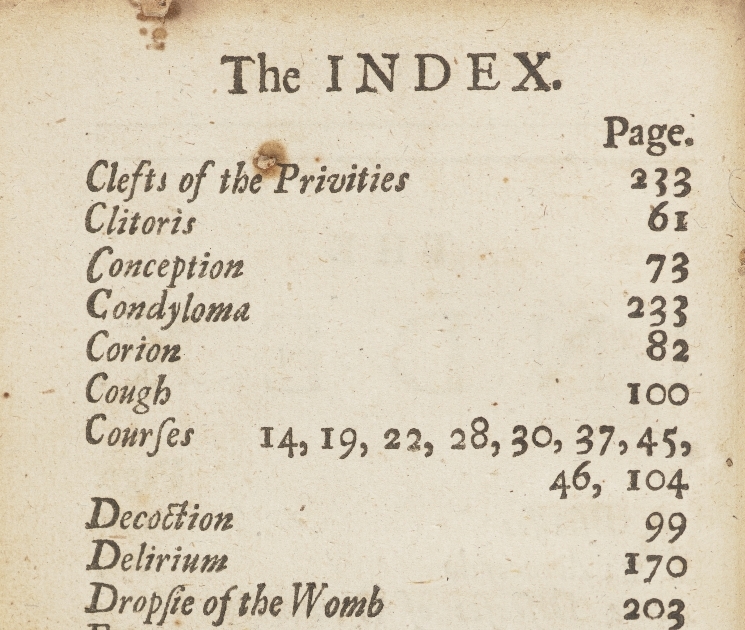 This is the second of two blog posts to accompany a display in Rylands Gallery. The first post focused on 19th- and early 20th-century material, this post explores 17th- and 18th-century attitudes to menstruation.

From ‘termes’ and ‘courses’ to ‘the flux’ and ‘flowers’, the variety of terminology used to refer to menstruation in the 17th and 18th centuries reflects the complexity of beliefs relating to it. With no single fixed definition, attitudes depended on context and were both positive and negative.

Medicine at this time was heavily influenced by ancient ‘humoral theory’, which held that health depended on the balance of four humours: blood, black bile, yellow bile and phlegm. Menstruation was therefore seen by many as the body’s natural way of discarding excess blood, or ‘plethora’. Too much or too little menstrual blood, however, could disrupt the equilibrium and cause a vast array of ‘women’s diseases’.

Sussex physician John Pechey’s medical compendium, A General Treatise on the Diseases of Maids (1696) refers extensively to illness caused by ‘excess’ or ‘obstruction’ of menstrual blood.  A “suppression of the courses”, Pechey warns, “is very dangerous and many desperate diseases arise from it”.  He recommends tailoring the cure according to a “variety of causes”.  If the patient simply has “too great a quantity of blood” to evacuate effectively, then the common practice of blood-letting is in order: “bleeding must be ordered in the Arm, and a large quantity of Blood must be taken away”. Such practices aimed to restore balance to the body.

Pechey also argued that a woman’s “sedentary and idle life” could cause an excess of blood.  Women experiencing excessive menstruation are prescribed a “sparing Diet and moderate exercise”.  Conversely, in the 18th-century midwifery lecture notes also on display (pictured below), exercise is considered to bring on menstruation:  “immoderate fluxes”, Robert Dobson writes, are sometimes caused by “too violent Exercise”.

Menstrual imbalance was also linked to mental illness. According to German physician Michael Ettmüller, menstrual ‘deficiency’ presents an assortment of symptoms and has many causes, including the “disorder of the Stomac”, undigested food, and “Affections of the Mind”, such as “Frights, Sadness, Grief, and the like”.

Another manuscript on display, Manchester physician Charles White’s lecture notes (pictured below), makes reference to the case of a Margaret Bruce, who is reported as displaying “hysteric symptoms” alongside an “obstruction of the menses”.  It was common practice to note the menstrual regularity of female patients when considering certain disorders. In this way menstruation was used as a general barometer of health.

0 comments on ““Good Blood, Bad Blood”: A Petite Exhibit on Menstruation in the Rylands Gallery #2”