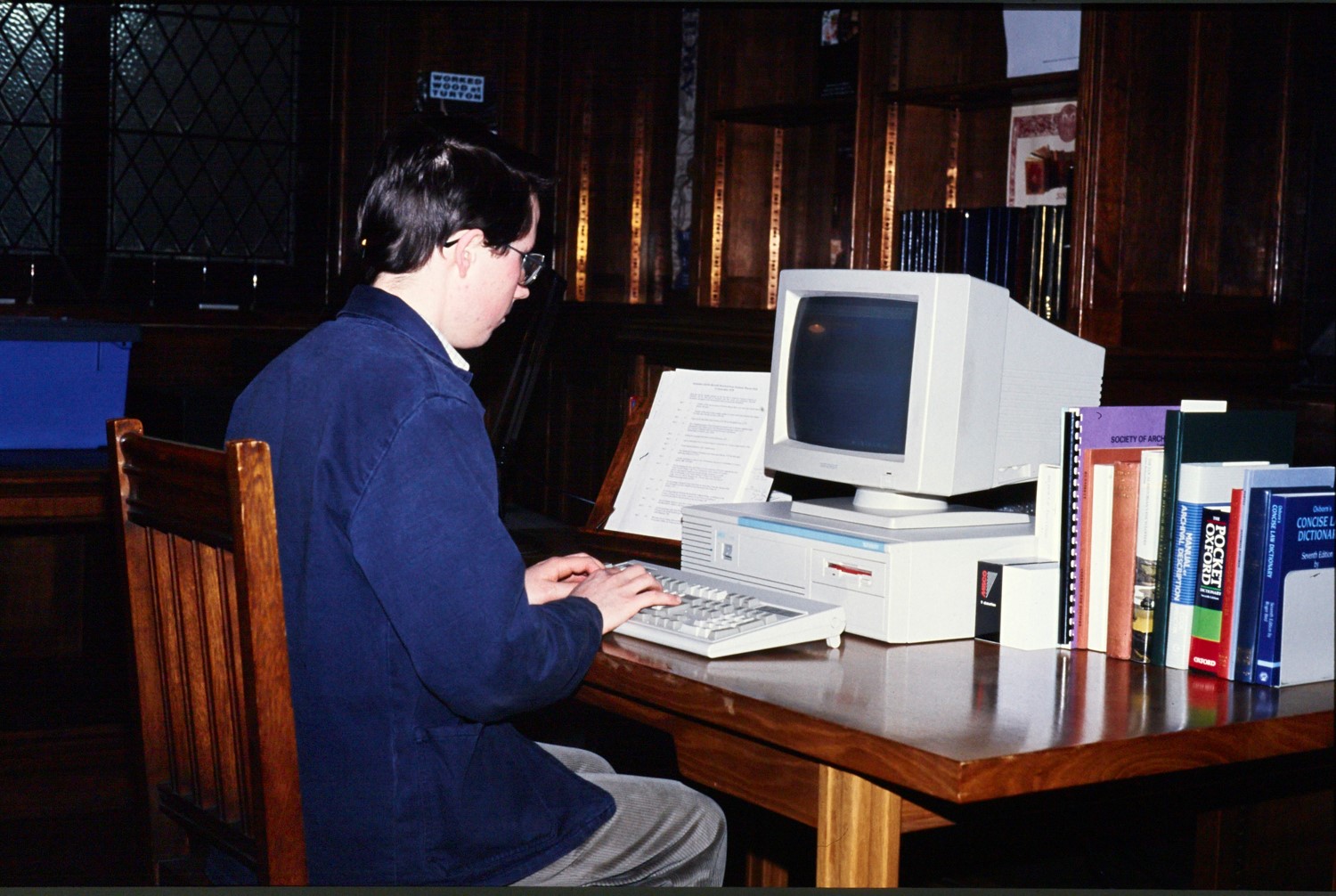 Thirty years ago today, a newly qualified archivist started working at the John Rylands Library, on what was meant to be a three-year project (it eventually took six years) to catalogue the archives of the earls of Stamford from Dunham Massey in Cheshire. Three decades later, I thought I’d offer some reflections on the profound changes I have witnessed since 1989.

When I told people that I had been appointed to an archivist’s role at the John Rylands Library, I was greeted with astonishment by senior archivists: why on earth do you want to work there? It was not exactly at the cutting-edge of the archive profession; more of a backwater. In fact, I was the Library’s first professional archivist trained in the modern era (later joined by Gareth Lloyd and Stella Halkyard), and so I had to develop all our policies and procedures from scratch: there was simply nothing in place when I arrived. This was an exciting but daunting experience. In every area, our activities could best be characterised as well-meaning amateurism. Today, as you would expect, there is far greater professionalism and expertise in all our activities. It is a wonderful privilege to work alongside highly skilled and dedicated librarians, archivists, curators of manuscripts and visual materials, conservators, as well as experts in visitor engagement, advanced imaging, digital technologies, and schools educational activities.

One of the most obvious changes is the scale of activity and pace of life at the John Rylands Library. In 1989 it was a quiet backwater. Visitors would occasionally interrupt the peace of the Reading Room – finding us more by accident than design – but if anyone had prophesied that we would attract over 350,000 visitors a year in 2019, their soundness of mind would have been seriously questioned. Readers did use the Library, of course, and the first incarnation of the John Rylands Research Institute (funded from the notorious sale of ‘duplicate’ books at Sotheby’s in 1988) had initiated a number of research and cataloguing projects, including my own. Yet it seemed to me, as a comparative youngster, that the John Rylands Library was rather stuck in the 1950s, when indeed some of my senior colleagues had started their own careers. Certainly the merger with the University of Manchester Library in 1972 seemed to have made little impact, except for the transfer of some of the University’s special collections down to Deansgate.

The number of staff was also much smaller than it is today: probably less than 40% of the total now. This, and a feeling of isolation from the rest of the Library and University, engendered a strong sense of camaraderie. One University Librarian referred to four of us (Alistair Cooper, Stella Halkyard, Anne Young and myself) as the ‘Deansgate Mafia’, and he was only half joking. In retrospect, the autonomy we were permitted as relatively junior staff was extraordinary. Fortunately our enforced ‘exile’ at the Main Library during the Unlocking the Rylands project (2004–7), meant that we were finally integrated into the rest of the Library, over thirty years after the formal merger. Today, everyone appreciates the vital importance of being part of one of the world’s great universities and university libraries, and it is inconceivable that the old insular mentality could return.

Technologically, too, the Library is now a very different place. In 1989 I was privileged to have my own PC (with 8 MHz clock speed [a hair-raising 12 MHz in ‘turbo’ mode] and a 70 Mb hard disk; my current laptop has a speed of 2.5 GHz and a 240 Gb disk) and access to a shared laser printer (which probably cost the same as a small car). But the Internet was just a twinkle in the eye of Tim Berners Lee. Elsewhere in the Library, letters were still being typed in duplicate, the quiet of the Reading Room regularly being interrupted by the staccato beat of an electric typewriter. The ‘World Wide Web’ arrived at the John Rylands Library around 1995; I remember groups of us huddling round the one networked PC in the building, watching awestruck as the Lycos search engine returned results at a painfully slow speed. We took turns to check emails once a day. Happy times!

Today, technology is critical to everything we do, of course. The Library is in the forefront of advanced imaging techniques and we are working with colleagues in Cambridge to develop a new image viewer, which will be unveiled early next year. A single high-resolution image file would have filled the entire hard disk of my first PC.

Our archive cataloguing system, which I developed with our Systems Manager, Charlie Hulme, was based on the Manual of Archival Description, devised by Michael Cooke. Being a graduate of the Liverpool University Centre for Archive Studies, I’d been initiated into the mysteries of MAD during my training. It was the first widely adopted standard for computerised cataloguing of archives. We used a primitive word-processor called (hopefully) Superwriter (it was anything but super), and a system of two-letter tags to represent MAD fields. These were then converted, via Basic programs, into mark-up for a desktop publishing programme called Ventura, which could produce surprisingly sophisticated printed text, with archival hierarchies represented through indentation of the text. I still remember with pride a visit by Michael Cooke to the Rylands in the early nineties, when we explained to him our method of producing MAD-compatible catalogues. He seemed pleased.

When the Library adopted EAD (Encoded Archival Description) as the standard for archive cataloguing in the late 90s, it was a comparatively easy matter (again using Basic programs) to convert the old files to the new standard. Printed catalogues soon became a thing of the past, as we focused efforts on making our catalogues available online via the Archives Hub and Elgar.

Researchers still complain that it is difficult to find out about our collections. There is certainly room for improvement, but it is hard to comprehend just how determined (bloody-minded might be a better term) you had to be thirty years ago to find anything in the John Rylands Library. There was no comprehensive guide to the collections, other than a rudimentary card index – for staff use only! (The present Guide to Special Collections was first published in 1999.) Printed books were described in a set of Guard Books formed of pages from Edward Gordon Duff’s Catalogue of Printed Books and Manuscripts in the John Rylands Library (1899), which had been superseded by the Supplementary Slip Catalogue, and a card index of Special Collections transferred from the University after the merger. Some of the archives and manuscripts were described in typescript lists, or offprints from the Bulletin of the John Rylands Library, if you were lucky. This lamentable state of affairs was nobody’s fault: it simply reflected the Rylands’ impoverishment during much of the twentieth century, and the rudimentary technology available for disseminating catalogues.

In conclusion, I miss the kindness and inspiration of much lamented colleagues, such as David Riley, Keeper of Printed Books, and Peter McNiven, Head of Special Collections. I also miss the camaraderie and informality – almost anarchy – of the Library in those far off days. But, by any measure the John Rylands Library is in a far better place today than it was in 1989. We have a clear purpose, a mission to support the University of Manchester’s strategic goals. Huge strides have been made in developing, cataloguing, digitising and conserving our collections and making them accessible to researchers, while our visitor engagement programmes have been utterly transformed. And, despite the professionalism and clear sense of purpose, there is still room for fun. I may not be around to experience the John Rylands Library in 2049, but I feel very optimistic for the future.

10 comments on “Thirty Years Ago Today: Reflections on Changes at the John Rylands Library”