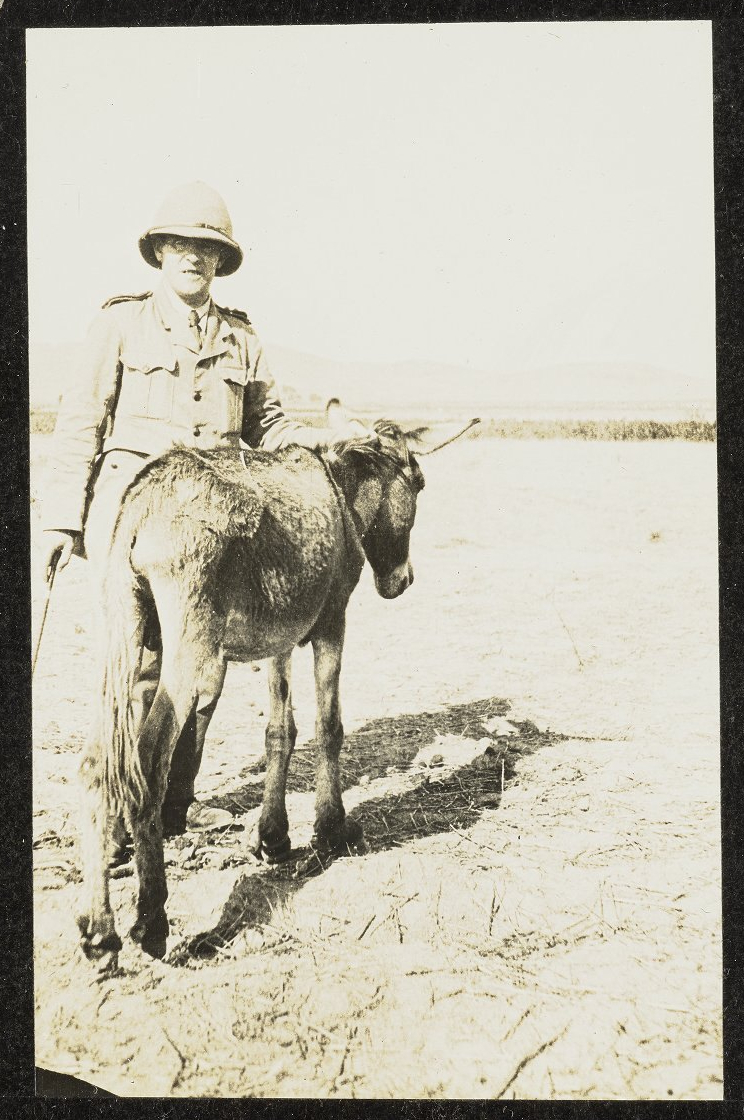 In September 2018, the Library accepted on deposit into the Methodist archives a small collection of papers created by the United Methodist minister John Henry Gibbon (1880-1933) and preserved by his family after his death in 1933.

A superficial examination of the general detail of Gibbon’s life appears to offer little in the way of interest for scholarship or the public. He was a dedicated minister, but did not achieve high office; he was a well-regarded preacher, but not outstanding. His passions were writing and photography, but his audience was the local church.

Yet the personal papers of this ordinary minister prove on close examination to be extraordinary because of one brief but important chapter in his life.

In 1916, at the height of World War I, Gibbon volunteered to serve in the Army Chaplains Department. Plucked from circuit ministry in Cornwall, his experiences over the next three years were transformative.  He served at training establishments in Britain, as well as on active duty in Greece, Salonika, Egypt and Palestine.

The experience of going to war was common to his generation, but Gibbon’s military record has particular points of interest. Contrary to the usual practice of soldiers remaining with one battalion, chaplains moved on a regular basis. His attachments included transit camps and hospitals as well as artillery, infantry and cavalry formations. As a chaplain, he wandered freely across military society, lunching with generals and joking with infantrymen. This gave his service an unusually broad perspective.

Gibbon was aware of the unique significance of this chapter in his life and was keen to preserve a record. He describes his military service in four diaries comprising 100,000 words of text. These documents are made available online as an annotated transcription PDF file, together with book readers containing digital images of the original documents. [Note: To turn the pages over, click on the image of the front cover of the bound volume.]

Gibbon’s fast-flowing narrative and engaging style combines with the rich content to create a wonderful resource for scholars and the wider public.

The psychological impact of war and separation from home and family is a central underlying theme. In 1916, at the start of the narrative, Gibbon is aged 36 and displays no youthful enthusiasm for the call of King and Country. Instead, he reveals acute anxiety through obsessive listing of his kit and long private talks with his wife. He never claims to be a hero, writing repeatedly of his nerves while in the front line, but he acquitted himself well, refusing instructions to leave his post tending to casualties under artillery fire and gas attack. It is fascinating to read how this mature Methodist minister, with no previous military training, hardens physically and mentally – holding services during air raids in Salonika and taking part in the offensive that ended the war in Palestine. After initial uncertainty, he becomes relaxed around private soldiers, adopting military terminology and using language regarded today as racially pejorative. His ministry was popular, although it sometimes took strange forms – he was much in demand as a tour guide for Second Lieutenants visiting the red light district of Alexandria, which expertise would have raised eyebrows back in Cornwall.

Throughout his military service, Gibbon remained free from spiritual doubt, committed to his rough parishioners and a sympathetic observer of the plight of local civilians. He visited Jerusalem and other biblical sites while on stand-down from the nearby front line. This provides the collection with another fascinating dimension as a record of spiritual pilgrimage against a background of falling shells and abandoned villages.

Gibbon was witness to seismic political change, as empires collapsed, governments fell and frontiers vanished. With his keen eye for non-military detail, he writes of local people and ways of life that had lasted for centuries, but were in the process of destruction. The Eastern Mediterranean world changed dramatically during the Great War, making this collection a valuable resource for study of the Near East and the Balkans at a crossroads of history.

If the Gibbon collection contained only the diaries, it would still have great research value, but it also includes 83 lantern slides depicting places and people in Palestine. The coverage includes street scenes in Jerusalem, archaeological sites and holy places, local people and British soldiers going about their business.

The slides, which are available here as digital images, comprise Gibbon’s own photographs alongside a small number of commercial slides bought from the American Colony, which was a Christian utopian community based in Jerusalem from 1881 to 1934. The Colony’s photographic department was an important revenue earner and its photographic archive (the Matson collection now at the US Library of Congress) is one of the world’s largest collections of images of the Near East in the late 19th and early 20th centuries, comprising 13,000 negatives. Gibbon’s own photographs, published here for the first time, and those from the Colony dovetail. His focus was on the British army interspersed with informal views of people and places, while the commercial slides concentrate on biblical sites and posed portraits.

The diaries and lantern slides are a unique personal record of one man’s journey through the Great War. As a non-combatant member of the armed forces, John Henry Gibbon provides a different perspective on the conflict outside of the Western Front. The war in Eastern Europe and the Near East is under-researched, despite its continuing impact on regional politics, religion and sectarian division. The Gibbon collection with its exceptionally rare combination of text and illustrations is a valuable addition to online research collections for the study of World War I and its legacy.

4 comments on “A Chaplain’s Story: The Great War Journey of John Henry Gibbon”