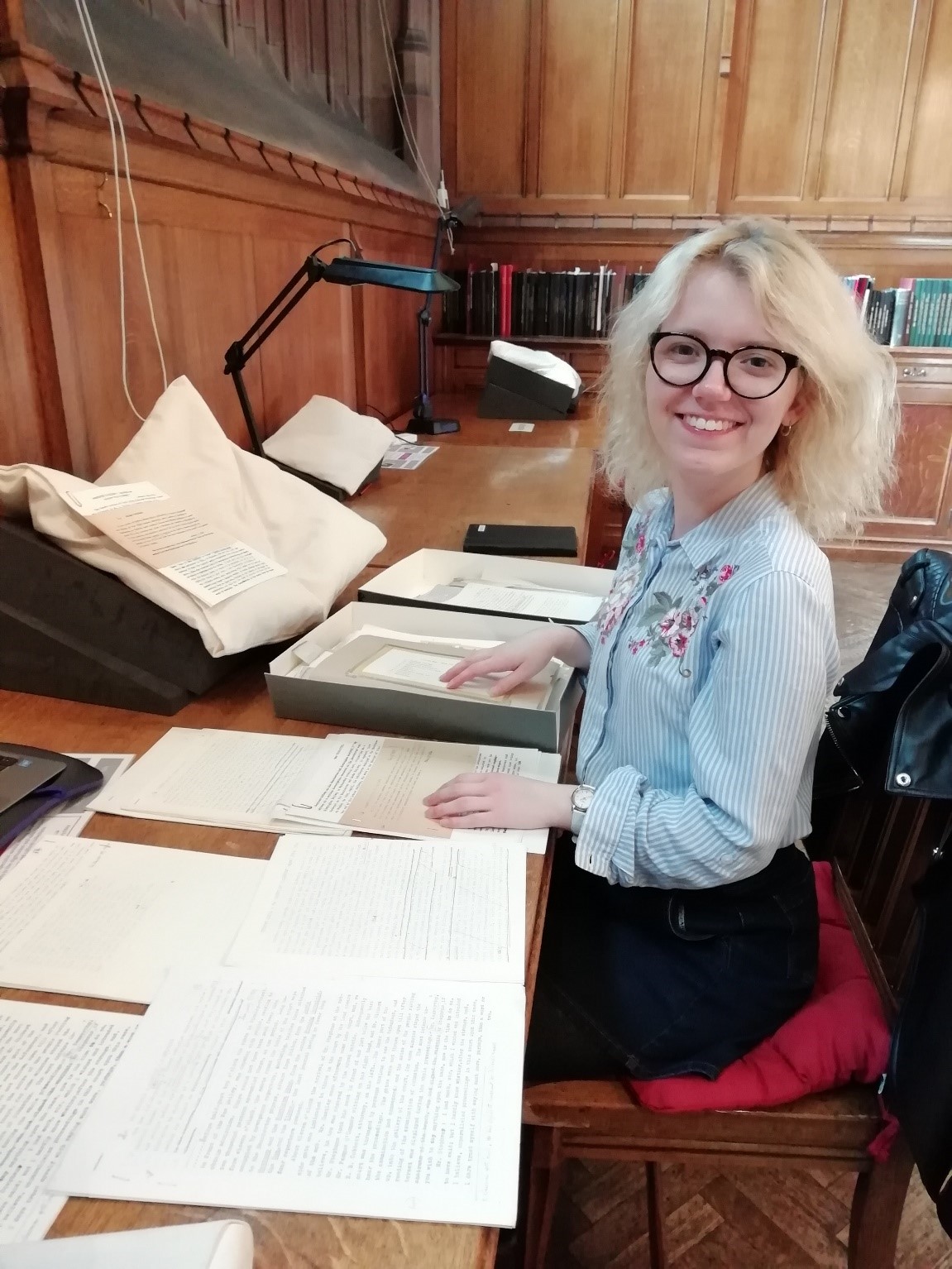 Anna Tomkinson, recent graduate in English Literature and American Studies and long-time volunteer, reflects on her numerous encounters with University of Manchester Library’s Special Collections and how they have shaped and enhanced her student experience.

My name is Anna Tomkinson and I have been volunteering at the John Rylands Library for three years now. I started in the first year of my undergraduate degree in English Literature and American Studies at the University of Manchester and have carried on all the way up to my postgraduate MA in Art Gallery and Museum Studies.

For three summers now, I have been given access to collections at the Rylands that require cataloguing. These collections have been varied and exciting, transporting me to different periods of time. I have witnessed the restless birth of the industrial revolution right here in Manchester from the Manchester Guardian’s radical perspective. I have seen Stalin’s Russia through the eyes of a curious young woman who was granted a scholarship to travel. Holding a piece of history directly in your hand is a privilege.

My undergraduate degree was flexible enough to allow me to continue to work at the Rylands in term time as well. Inspired by my first summer of volunteering, I took a free choice module in my second year through the University College for Interdisciplinary Learning called ‘Curating Culture’. This was based at the Rylands and took me further behind the scenes of the library, seeing the part it played in Manchester’s history while allowing me to do something different with my degree. Throughout the course of the module we used the resources of the Rylands to undertake innovative modes of assessment. Reflecting on the 2017 exhibition ‘Life of Objects’ I was able to curate a mini exhibition based on my grandmother’s life. In the run up to Christmas, I teamed up with my classmates to stage an object encounter to get us in the festive spirit.

My time at the Rylands has motivated me to want to work in the heritage sector. It has opened my eyes to the myriad of different roles that are required to preserve, interpret and promote the collections. I have seen medieval manuscripts lovingly restored by dedicated conservators and Beats memorabilia put on display front and centre by enthusiastic curators. The Rylands has introduced me to people who are passionate about the work they do and made me want to follow in their footsteps. It also influenced my choice to study Art Gallery and Museum Studies as a postgraduate degree.

Having the opportunity to delve into the treasure trove that is the archives at the Rylands has allowed me to discover something new and unexpected about the city I thought I knew so well or history I thought I had learned before. It has taught me new skills, enhanced my degree and given me inspiration for my future education and career.

0 comments on “A Journey through Time and Place”