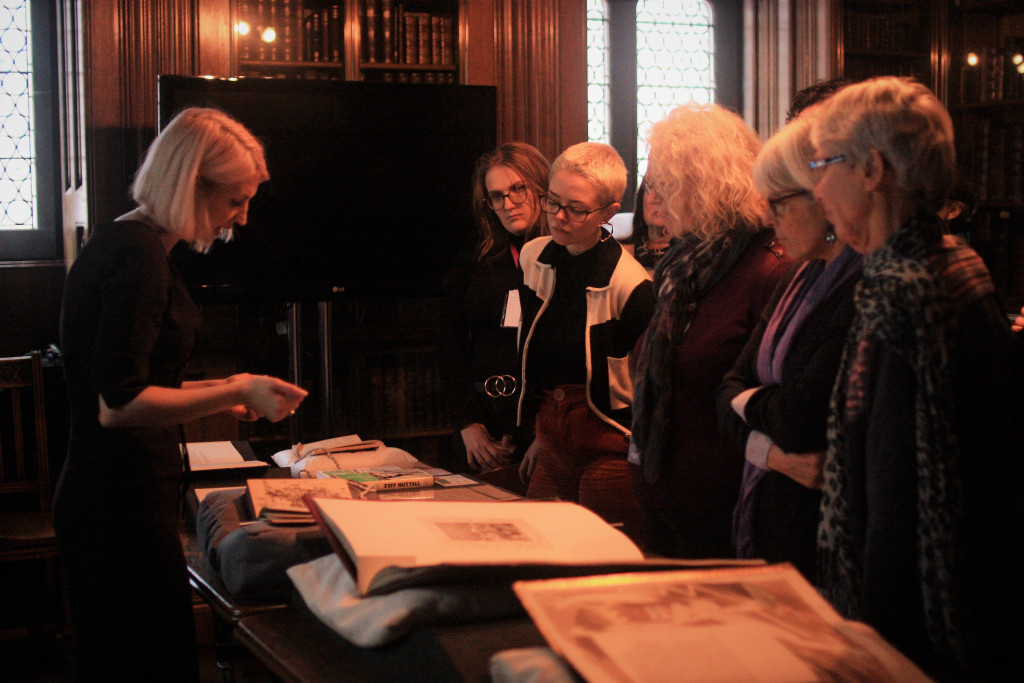 This blogpost, by student interns Ami Savage and Marnie Parker, was first published on the Art History UoM Index blog.

Earlier this month, guests from Art History and English Literature backgrounds came together for the conference The Artist of the Future Age: William Blake, Neo-Romanticism, Counter-Culture and Now. The event was organised by Colin Trodd (Art History), Douglas Field (English and American Studies) and Anne Anderton (John Rylands Library), with support from Sarah May and Naomi Billingsley (John Rylands Research Institute).

Speakers of the event sought to examine the various circumstances under which the visionary’s work galvanized modern European cultural production as well as specific artistic and critical responses to the phenomenon. The sold-out event was held in the Historic Reading Room at the John Rylands Library and supported by the Paul Mellon Centre for Studies in British Art and the John Rylands Research Institute.

The afternoon began with an object-based session, where Special Collections Curator Anne Anderton presented items from the library’s collection to viewers in the Bible Room. Here, twentieth-century responses to Blake, such as Jeff Nuttall’s Bomb Culture, accompanied examples of original work by the poet-engraver, including a unique, hand-coloured copy of Night Thoughts. This intimate and characteristically interdisciplinary encounter with Blakean word and image proved to be a highlight for many.

Discussions were then initiated by Colin Trodd and Miriam Dafydd (The Science Museum), who introduced participants to the sheer breadth of visual culture and, in particular, the variety of artistic practices influenced by Blake. Both speakers focussed on the reception of Blake in Neo-Romanticism, distinguishing between the aesthetic Blake – associated with physical power and mysticism – and the more folkish Blake, associated anti-Industrialist forces and the pastoral. Miriam spoke in particular on the influence of Blake to the work of Eric Ravilious, John Piper and Paul Nash.

Next, David Hopkins (University of Glasgow) spoke about Blake’s influence on culture and counterculture in Britain post-1968. Hopkins spoke about the various Avant-Gardist responses to Blake, such as the responses of Francis Bacon and Eduardo Paolozzi.

Sibylle Erle (Bishop Grosseteste University) followed, speaking about the German expressionist and print-maker Ludwig Meidner in exile and the ‘German’ Blake. Erle spoke about the influence of Blake on Meidner, who belonged to the mystical wing of German expressionism, emphasising how the artist understood Blake’s art as shaped by neo-romanticism.

Following questions chaired by Dr Billingsley, Luke Walker (University of Roehampton) spoke about Blake in the 1960s, entitled ‘British and European Counterculture and Radical Reception’. Walker spoke about Blake’s relationship with the 1960s declaring the decade as “fundamentally Blakean” in the three spheres of popular culture, academics and counterculture, paying particular attention to Allen Ginsberg’s relationship to Blake.

James Riley (University of Cambridge) talked about how Blake has influenced Welsh writer and filmmaker Iain Sinclair, speaking about his book Blake’s London: the Topographic Sublime (2011) in relation to visionary poetry of the 1960s.

Following a break, Martin Myrone (Tate Britain, co-curator of William Blake) spoke about how Blake’s image has been claimed by both the political left and right and the importance of recognising the nuances in Blake’s politicism. Myrone spoke of the complexity of Blake as a political figure through reference to The Spiritual Form of Pitt Guiding Behemoth (?1805) and The Spiritual Form of Nelson Guiding Leviathan (1805–9).

Our former lecturer Luke Uglow (University of York) spoke about Critical Reviews of Blake in the UK and Europe with a particular focus on the impact on what he called ‘ABC Blake’, or the reception of Blake by the traditional art magazines Apollo,The Burlington Magazine and The Connoisseur.

After a final discussion chaired by Dr Trodd, poet Michael Horovitz and distinguished curator Bryan Biggs spoke in conversation about counter-cultural and contemporary visions of Blake and Blakean politics. As the event ended with a rendition of Blake’s ‘Laughing Song’ from Songs of Innocence by Michael Horowitz and Vanessa Vie, we are reminded of the extent to which Blake has impacted poets, artists, art critics and cultural commentators like Horowitz in the UK and beyond from Neo-Romanticism up until the present day.

The exhibition William Blake is on display at Tate Britain until 2 February 2020.

Another report on the event, by student intern Francesca Bradley, can be read on the JRRI blog.

0 comments on “Event Report – The Artist of the Future Age: William Blake, Neo-Romanticism, Counter-Culture and Now”