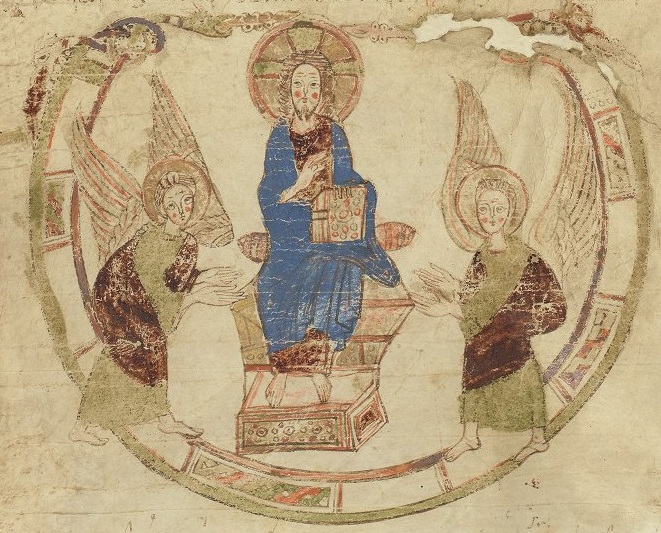 I am just coming to the end of a 17-month stint setting up an online catalogue of the Latin manuscripts housed at The John Rylands Library. 49 of these manuscript descriptions are now available on our new viewing platform, Manchester Digital Collections. Some time ago I wrote a blog on the process of cataloguing, which you can read here. I am a medieval historian by training, and learned TEI, the standard used within a coding language called XML, during my previous role transcribing early modern astrological-medical records at the University of Cambridge.

During my interview for this role, back in June 2018, I was asked by Dr Stephen Mossman, a medievalist in the History department at Manchester, if I thought cataloguing was a separate activity from scholarship. My immediate – and heartfelt – response was ‘absolutely not’. As someone trained in reading and analysing manuscripts, whose scholarship revolves around looking at manuscript originals, how could the process of knowing what manuscripts contain, and collating scholarship on them be at all separate from the process of scholarship? Luckily, Stephen and the other interviewers agreed with me, and I was offered the job.

There are several ways in which my work digitising existing manuscript catalogues – and making additions of my own – has enriched me as a historian of the Middle Ages. Firstly, it has given me so much knowledge about some of the texts that I previously didn’t know a great deal about. Not only has it given me nuts-and-bolts information about the texts themselves – for example, date of composition or author – but it has also enlightened me  about the scholarship carried out on these texts over the years and how this has shaped the way the texts themselves have been seen at different times. This is not knowledge that I would have had a chance to gain otherwise, and broadening my horizons in this way has been invaluable.

Secondly, I have learned so much about the different forms manuscripts can take. Until my work here began, I had worked mainly with codices – i.e. books. The vast majority of the manuscripts in the Latin collection take this form, but some are in roll format. For example, Latin MS 1, produced in Ravenna, Italy, around 600 CE on papyrus, is a long roll now housed in a glass case. It is a deed of land from Johannes, a military commander, to the church of Ravenna, with seven witnesses. Six write in Latin, and one in Greek.

Latin MS 2, the ‘Exultet Roll’ made in Bari, Italy, around 1000 CE, is a beautifully-illustrated roll containing the words to the sung proclamation for the Easter vigil.

MSS 113 and 114 are, respectively, a chronicle roll of the late 15th century, and a mortuary roll of the late 1450s. Getting to grips with different formats of manuscript, then, has been very helpful in thinking about the function of different layouts.

A third way in which working with the Latin collection has enriched me as a historian has been the opportunity to teach on the MA Medieval and Early Modern studies course, ‘History of the Book’. I wrote a class from scratch on the long history of medieval manuscripts, using items from the Latin collection as examples. It was a trip through the different stages in the lives of these books: from creation to adaptation, dissemination, cataloguing and digitisation.

Fourthly, my role has allowed me unprecedented access to the materials in the collection relevant to my own scholarly interests – magic, medicine and the occult. These sorts of texts might be contained within all sorts of different manuscripts, and might be previously uncatalogued. Therefore the opportunity to look at the contents of the collections very carefully has been invaluable. My PhD, awarded in 2015, was on the ‘Sphere of Life and Death’, a numerological device for predicting the future. And so it was a wonderful moment when I came across a ‘Sphere’ in Latin MS 228 – only catalogued in draft form up to this point by N. R. Ker in the late 1970s. This draft catalogue was not online or searchable when I did my PhD.

Finally, my role here has enabled me to carry out brand new scholarship of my own. I was given the opportunity to write an article on one of our under-catalogued items in the collection for the Bulletin of the John Rylands Library. I chose Latin MS 500, an anatomical manuscript completed in 1497 in central German-speaking lands (possibly Erfurt or Leipzig). Until I was employed here to work on the digital catalogue, this manuscript had only been catalogued in Ker’s typewritten draft, which was not available online, and the manuscript was only available in full on the previous image viewing system, Luna, from 2012/13 onwards. For many reasons it is a very interesting book, not least because a debate has arisen in the scant scholarship already available on it whether it was copied from the printed version of Johann Peyligk’s Compendium philosophiae, first published in 1499, or whether it was a prototype for the printed edition. This is a question I will be addressing in the article, as well as providing a detailed description of the manuscript itself.

It has been a privilege to work with this collection, which spans 1,300 years, for the last year and a half. It has absolutely enriched me as a scholar in multiple ways, and I can’t wait to see how the foundations I have laid are enhanced and improved in years to come.