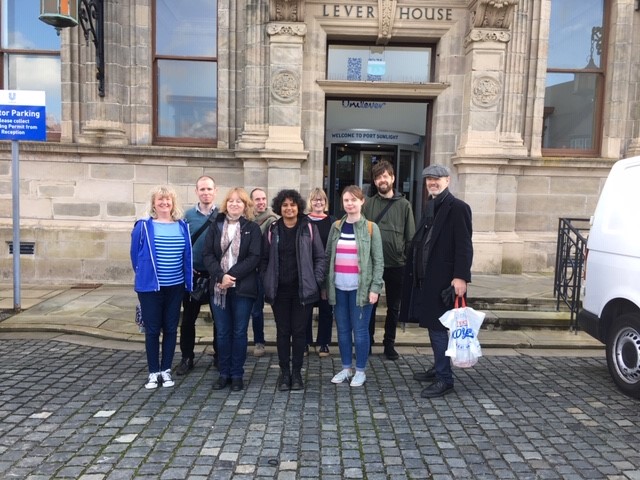 Off on our jolly holidays

One of the perennial problems faced by the Reader Services Team is that the service is split over two sites. We also have a number of part-time staff which means it is difficult to build a team rapport, especially with some of the team never working alongside each other. Having an awayday gave us all a chance spend time with each other and share stories and information.

It was also a chance for us to have a day away from the temporary reading room where we have been over the summer, get to know each other more as a team, and share best practice with another reading room service.

The History of Port Sunlight

Port Sunlight was created by the Lever Brothers, who owned an established soap manufacturing company called Lever Brothers, now part of Unilever.  In 1888 a model community was designed to house and support the workers who enjoyed generous wages and innovative benefits. By 1909 there were 700 cottages, a concert hall, a school, a theatre, a library, a gymnasium and an open air swimming pool. The rent to live there was a fifth of the soap factory workers’ weekly wage. Activities were compulsory and if the employees broke Lever’s strict ethical codes they lost their jobs and houses, which were tied to employment. In 1906, Lever was elected as a Member of Parliament for the Liberal Party in his Wirral constituency. In his speech he urged the government to copy the old age pension plans he had set up for his workers.

Although workers were treated favourably at Port Sunlight, in 1911 the company acquired land in the Belgian Congo.  Here they operated thorough a subsidiary that used forced labour. The modern Unilever is committed to the eradication of enforced labour. More information can be found here.

We were extremely lucky to have had the offer from a resident of Post Sunlight, Dr Christine Verguson, who generously gave up her time to give us an historical background and tour of Port Sunlight.

Dr Verguson brought out some of her own personal archives from her family who had worked at Unilever, and also some items from the research she has undertaken into the history of Port Sunlight.

One of the most interesting pieces was the Roll of Honour that not only listed those that saw action in the First World War, but also names of families and children who  worked to support the War effort.  This was also marked on the War memorial that Christine later showed us, which had statues of soldiers in uniform as well as those of women and children.

We were also able to go on a tour of Unilever Archives.  Unlike a lot of business archives, they are open to external visitors.  We wanted to visit to find out more about how they dealt with readers in their reading room from first enquiries to on-site visits.

We were met by Archivist, Nicola Hubberstey ,and Assistant Archivist, Scarlett, whom some of the group recognised form her recent volunteering at the University Archive and Record Centre.  We signed in and were given the housekeeping rules.  As a working factory, we had to hold onto handrails and keep within the white lines when crossing traffic areas.

An accredited archive, they hold a large amount of business records on a variety of formats.  Unusually for an archive, they house all the business records as well as archive collections.  They are responsive to internal requests which take priority over external requests that they receive, and they have undertaken a large number of volunteer projects, the most recent one being able to be undertaken by remote access, enabling those who wouldn’t normally be able to visit an archive to be involved in some way.

The tour started off with the group being shown the stacks which housed all the companies’ records which are held along with the archives.  We were then shown items from the collection which included examples of early advertising, some of the paintings, and medals that had been awarded to the company over the years.

We then went to the purpose-built reading room where we were shown a video promoting archive use to company employees which highlighted the material they hold.

We learnt more about how requests are made by the public for visiting and the support given by staff for reader requests regarding the different types of format, how readers are supported, from the general enquiry to the visit, covering aspects such as access arrangements (policies, access restrictions, and how this is communicated). On the website they ask for 21 days’ notice of a visit, although they do occasionally receive unexpected walk-in users. They also get a number of unsolicited donations which they deal with on a case-by-case basis.

We were shown how they deal with a reader from initial enquiry to visit.  The Unilever website gives extensive information, all on one page using a drop-down element and it is much more user-friendly that our existing website.  This is something we are aware needs addressing.

We had a thoroughly enjoyable day where we were able to learn how another archive runs and hopefully take some ideas from their website and film that we can use in the future to help enhance our services.  We also hope that we are able to have the team from Unilever over to visit our new reading room in the near future.

0 comments on “Port Out, Starboard Home: A Clean Break”