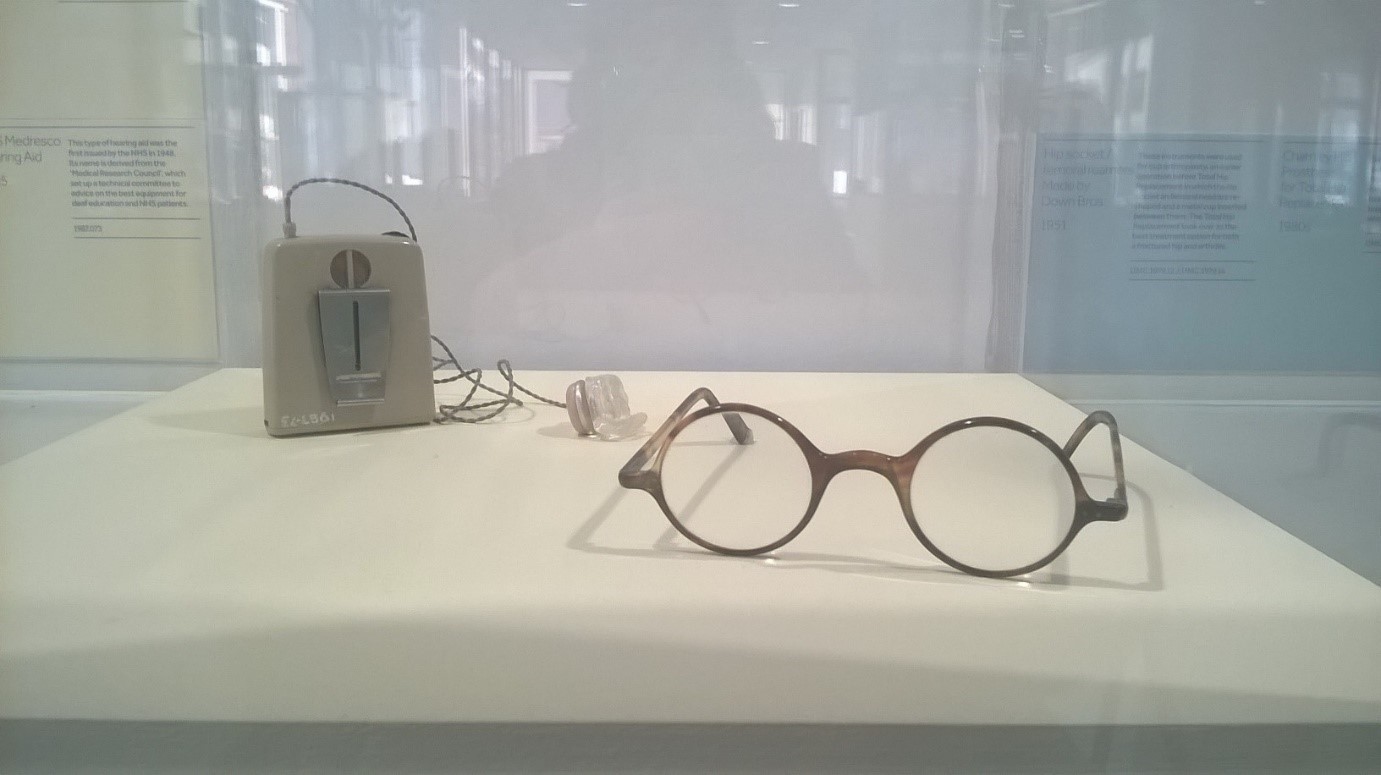 In my role as a Reader Services assistant within Special Collections the best part of my job is my interaction with our readers. Over the years I’ve been lucky to meet some fascinating and genuinely lovely people. It’s wonderful to see our readers using the many rich resources that we hold in the University of Manchester Special Collections, housed in the Archive and Records Centre in the University Library on campus.

One of our regular readers is Dr Peter Mohr who was a neurologist at Salford Royal Hospital for 30 years. During one of his recent visits to research some of our medical archives he began telling me about his role as honorary volunteer and advisor at the Museum of Medicine and Health which is in the Stopford Building on Oxford Rd, just across the road from the University Library. I was intrigued and wanted to find out more. I asked Peter if I could come over for a visit to the museum and he very kindly agreed!

Peter has been involved with the Museum of Medicine and Health since 2006. As well as being a neurologist, Peter has always been interested in medical history and gained his MSc and PHD at CHSTM (Centre for the History of Science, Technology and Medicine) under Professor John Pickstone (1944-2014).

From summer 2018 there has been an exhibition in the foyer of The Stopford building, open to all, called Instruments of Change. The exhibition is part of NHS at 70, a University of Manchester-led national project supported by the National Lottery Heritage Fund (NLHF). It collects stories and memorabilia from people who worked in and were cared for by the NHS since its creation in 1948. It also showcases a selection of objects that tell stories about medical research and innovation in Manchester.

I was met by Peter and his wife Julie at the exhibitions cases in the foyer and Peter explained the history of each item in the various cases. These ranged from a hospital Sphygmomanometer in a metal case, used to measure blood pressure, to examples of early NHS hearing aids and glasses and diagnostic sets.

Peter then told me about his long involvement with the Museum.  The Museum of Medicine and Health dates back to the closure of the old Manchester Medical School on Coupland Street and its transfer to the new Stopford building in the 1970s. George A.G. Mitchell (1906-1993), the University’s Professor of Anatomy had built up a collection of antique medical instruments that were kept in his office. The transfer of the Medical School to the new Stopford Building in 1972 was overseen by Dr F.B. (Bill) Beswick, the Executive Dean, who decided that any equipment left, including Professor Mitchell’s collection, should be saved.

The collection was looked after by Dr Beswick’s wife Charlotte, who became honorary Curator for 20 years. Her work attracted further donations from hospitals, clinics and healthcare professionals. Bill Jackson (1927-2007), a retired pharmacist and medical historian took over until 2006 when Peter became honorary Curator. At that time the Museum had a room on the 3rd floor and large display cabinets in the Stopford foyer; these were dismantled in 2011. Later the collection was moved (twice) to its present storage room.  It is now a collection of over 8000 medical instruments and equipment and is part of the University Collections. It holds the most extensive collection of medical and bioscience objects in Manchester, spanning the past three hundred years.   The objects in the Museum of Medicine and Health are now called the Beswick Collection in honour of Dr Beswick and his wife Charlotte, the museum’s first Curator. Peter and his wife Julie now act as volunteers and advisors and give their time to support the activities of the museum.

We travelled up in the lift and went down quite a few corridors until we arrived at the Museum of Medicine and Health and Peter unlocked the door. I stepped inside to an absolute treasure trove packed from floor to ceiling with objects and medical items. The Museum had also housed a large collection of medical illustrations and sketches by medical artist Dorothy Davison (1890-1984). These are now accessible as part of the University medical archives as they were transferred to the Library in 2016. They are amazing to see and a wonderful resource for researchers.

The museum has a large collection of all types of surgical instruments and operating theatre equipment, a wide range of stethoscopes and ECG machines. There are collections of items relating to Haematology including blood transfusion items and a leech jar; drug jars including a collection of rare 18th-century blue and white Delftware apothecary drug jars (the oldest in the museum); and many items of medical clothing including blazers worn by medical students which were in good condition. There is lab equipment, doctors’ property, medical medals, teaching skeletons, Edwardian glass lantern slides, syringes and needles, pharmacy bottles and jars, pill boxes, bottle labels and scales! In fact so much it was difficult to see it all in the time I had there.

I was surprised at the sheer size of the collection and it was easy to see just how dedicated Peter and Julie are in helping to look after the collections.  They regularly go to other medical museums around the country and attend exhibitions and give talks and tours to school groups and members of the public.

The Museum of Medicine and Health has a part-time Heritage officer, Stephanie Seville (who also works at The John Rylands Library). We met briefly whilst I was on my tour of the museum and she has said that Peter and Julie are essential to her work. Her role is within the Faculty of Biology, Medicine and Health, supporting the University’s Social Responsibility agenda to embed public engagement activities in research and education.

The museum is embedded in various teaching modules, a successful example being within Art Gallery and Museum Studies in the School of Arts, Languages and Cultures (SALC). Since 2015 Art Gallery and Museum Studies has run a module focused around the collection. Each year the students borrow around 50 objects and research, create condition reports and work together to produce pop-up exhibitions in a local cultural institution*. All of which help contribute to their professional development in heritage. In addition, SALC have reported that graduates from the course, commonly humanities graduates, have increased their chances of employability in science museums, after working with medical objects. The museum also plays a role in events and festivals and runs workshops for school pupils as part of the annual Charlotte Beswick Inspiring Futures Day.

So all in all it was a wonderful visit to a fantastic hidden gem. I was pleased and thankful for having seen it. It just goes to show what you can discover when you get talking to your readers!

Thanks to Peter and Julie Mohr and Steph Seville for additional information, additional photos and history of the museum. More information on the Museum including contact details can be found here https://www.bmh.manchester.ac.uk/museum/.

*in fact the latest pop up exhibition using the collection is on the 11 December 2019 at Manchester Central Library http://www.librarylive.co.uk/event/instrumental-change/