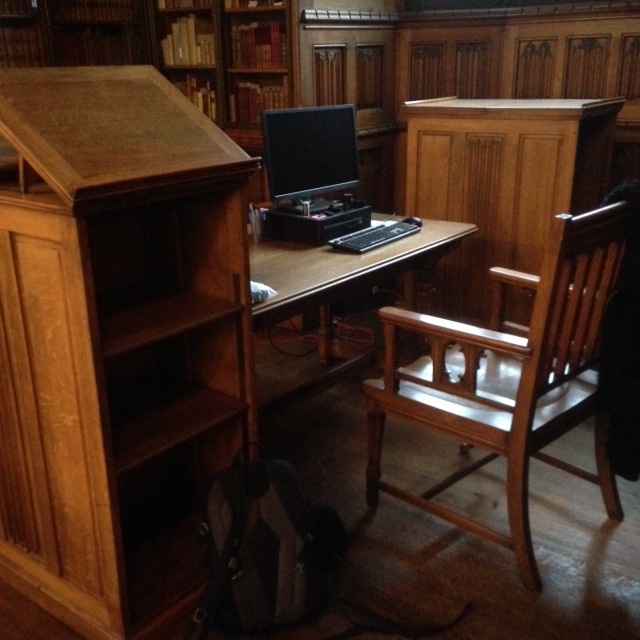 It’s been an amazing year. What an honour to be Inaugural Writer-in-Residence at The John Rylands Library. Let’s start at the very beginning, with the feature in the prestigious UoM magazine.

The residency was a new departure for myself as well as The Rylands: my first year-long residency, and the first time I’ve worked in situ (writing about a place whilst working in the place itself). Briefly, my task was to complete the first draft of a new novel. The extended time to write proved invaluable. I could give the novel the time it needed to develop and grow. As well as time, I had the gift of space. I loved my alcove (by some alchemy, I was in Alcove 13). I found it a magical space where I could shut out the world and write.

The novel (working title ‘Not All Ghosts’) has a theme of haunting and things being not what they seem. You could say I ‘haunted’ the John Rylands, and the library responded in kind… I experienced a number of unexpectedly chilling moments. For example, the main character Wil hears books ‘speaking’ to him. As the novel progresses, he spends more and more time amongst the old books, wandering through the stacks and tuning in to their strange messages. I decided to try this ‘dowsing’ myself and see what happened. Rather spookily, specific books clamoured for my attention. When I took them from the shelves, they seemed to be just the thing I was looking for. Even when I didn’t know I was looking for it.

I was warmly welcomed by every single member of Rylands staff, and can’t overstate the importance of this. I received so much help as I learned new ways to draw inspiration from collections and archives. Thank you all!

Stella Halkyard began the process and sent me in fascinating directions, delving into the Special Collections and coming up with gold every time. Her expert guidance showed me the way through the labyrinth of the catalogue. To research the 1980s setting, I interviewed past and present staff and was moved at how interested everyone was. I’m very grateful to them for listening and answering my bizarre questions – everything from trolleys to book-dusters to roof gardens! The answers helped me conjure a true sense of authenticity. As a result, the library has become far more than a space; it’s grown into a character in itself.

During the year, I did a lot more than write. There’s not enough space to describe every one of the year’s highlights. Previously, I’ve blogged about the Museums at Night event, the Tour I devised for Manchester’s LGBT Foundation and the Celebratory Reading that marked the end of the residency to name a few.

It was exciting to be included in the life and work of the Library. Special thanks go to Jess Smith for being there for me every step of the way. A proud moment was joining five University of Manchester academic staff to recreate and re-enact historical characters for the Peterloo exhibition. In a first for The John Rylands, I donned bonnet and shawl and channelled the spirit of Jemima Bamford by creating a speech, and performing it to a packed house.

There were unexpected adventures along the way. I make no secret of my passion for libraries, so was honoured to establish links with staff at the British Library. As a result, I was invited to present a paper about my John Rylands Residency at the Mix Experiential Storytelling Conference at Bath Spa University.

There’s not enough room to list all the invitations I received as a result of this marvellous residency. A few high points are: Mslexicon (Leeds University), Bradford & Huddersfield Literature Festivals, Antwerp Queer Arts Fest & the Sonic Waves Conference in Manchester. To top it all, in June 2019 Val McDermid and British Council named me one of the Top 10 LGBT+ writers working in the UK today.

I’m completely in debt to The Arts Council for funding my Residency. I’m delighted to discover that the University of Manchester have pledged to fund future Writer Residencies at The John Rylands Library. I can’t imagine a better legacy.

To be the first Writer-in-Residence at The John Rylands Library has been a significant achievement and an unforgettable experience. It’s introduced me to a new group of colleagues, supported me to create a novel, and boosted my confidence to create and pursue future residencies with a sense of the Power of Asking.

And all in the spirit of Enriqueta.

I sent the first draft of ‘Not All Ghosts’ to my agent by the target date. Watch this space.

0 comments on “Rosie’s Reflections on a Writing Residency”