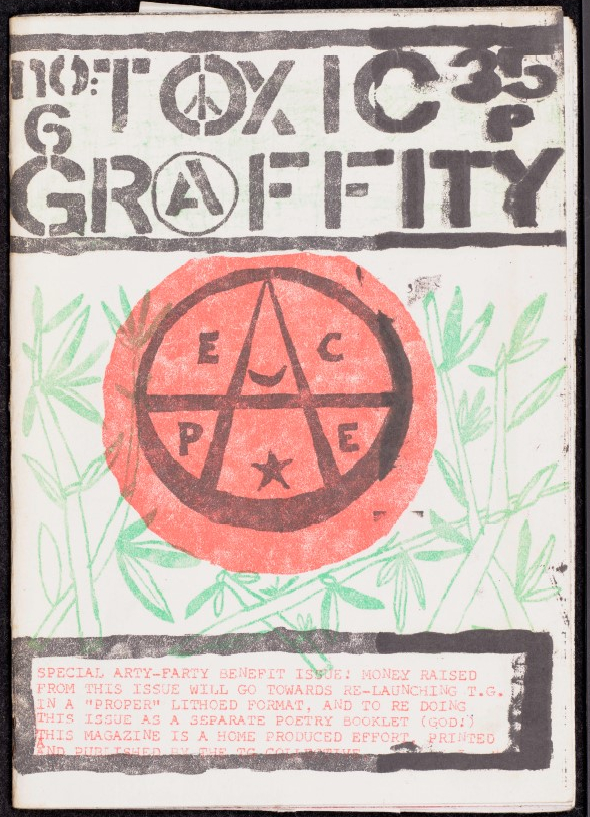 On a dark, gloomy winter afternoon the John Rylands Library hosted a ‘Zines’ workshop for undergraduates from Colgate University, USA.  It was the final class for a group who had spent a semester in Manchester learning about the region and the history of print and media technology led by Professor Meg Worley.  It was also a first for the Library: the first time we used underground publications and zines collected by Dave Cunliffe, a Blackburn-based poet and publisher, in a teaching session.

While the John Rylands Library is widely acknowledged as home to exquisite medieval manuscripts, incunabula and early bibles, its modern materials are much less well known.  This is a pity as the Library’s twentieth-century literary collections take the history of the book right up to the present day, amply demonstrating how, from the 1960s onwards, the rules surrounding print production and publishing were ripped up and reinvented. With this in mind, we worked with Professor Worley to pick items from our collections which challenged long-established conventions on what a book should look like and who can publish.

Drawing upon our collection strengths, we picked out little magazines and small-run publications by Ian Hamilton Finlay, Jeff Nuttall, dom sylvester houédard (dsh) and Li-yuan Chia, which showed how conventions governing typography, structure and layout were challenged and reinterpreted by experimental artists and authors from the 1960s onwards. Rare examples of Nuttall’s My Own Mag, cheaply produced in small runs on a mimeograph copier, and Finlay’s Poor. Old. Tired. Horse. were shown alongside a (cosmic) typewriter which belonged to dsh, a beatnik monk who pioneered typewriter art.

One of our favourite finds in the Cunliffe boxes was a photocopied and stapled guide to DIY printing, stuffed full of practical advice from paper sizing to creating and using stencils.  Its anonymous author saw the ability to cheaply produce and distribute information as integral to activism:  “For too long people have written for us.  We have read other people’s views of our lives. Seen other people’s ideas on how we should live.” Its purpose was not only to instruct in self-publishing but to show that being able to create, print and distribute ideas, without censorship or commercial intervention, was itself a political act.

The most enjoyable part of the workshop was the second part when students were provided with 16 ‘zines’ to examine and interrogate.  These reflected a range of views and types from the archetypal football fanzine to those promoting peace and vegetarianism.  We also made it very clear that we had not read them closely and issued the following disclaimer: “Zines will contain material that some people will find offensive. The point of the counter culture movement was to push boundaries whether religious, political or sexual … they contain language that contemporary audiences will find unacceptable.”  Fortunately this piqued rather than diminished participants’ interest!

The workshop was enhanced considerably by Bruce Wilkinson who both studies the underground press and is part of its history. Bruce co-edited Vertigo zine, organised gigs hosting zine fairs, and contributed reviews to By-Pass magazine (contextualising the 1990s scene).

If we were doing this session again we would make the introduction shorter with more visual examples and allow more time for the hands on element.  If more time were available, the chance for students to plan and make their own zine would be a great addition.  We were also excited by the potential of this workshop to be repurposed for a range of disciplines from sociology, politics and government to literature, art and design history.

Another finding from the student feedback forms was a desire to define what a zine is.  So here goes: amateur, folded, stapled, offensive, small print run, photocopied, wonky/skewed whether intentional or deliberate, cartoons, anti-authority/marginal voice, DIY, not for profit, multiple authors, mix of formats cut and pasted (photographs/typescripts/handwriting and drawings), poetry, sections upside down/back to front and downright confusing. Many defy classification but ultimately if it’s provocative, subversive and breaks the rules, then that is the zine spirit.

The vast, and alas still uncatalogued, Dave Cunliffe collection arrived in the library in spring 2018. Find out more about the scope and range of this collection in series of illuminating blog posts written by Bruce Wilkinson during his time as a John Rylands Research Institute Fellow in 2019. His earlier MA thesis focused on three 1960s little poetry magazine editors, including Dave Cunliffe, and their countercultural impact which became the book Hidden Culture, Forgotten History (2017).

0 comments on “Zines & the Art of DIY Publishing”