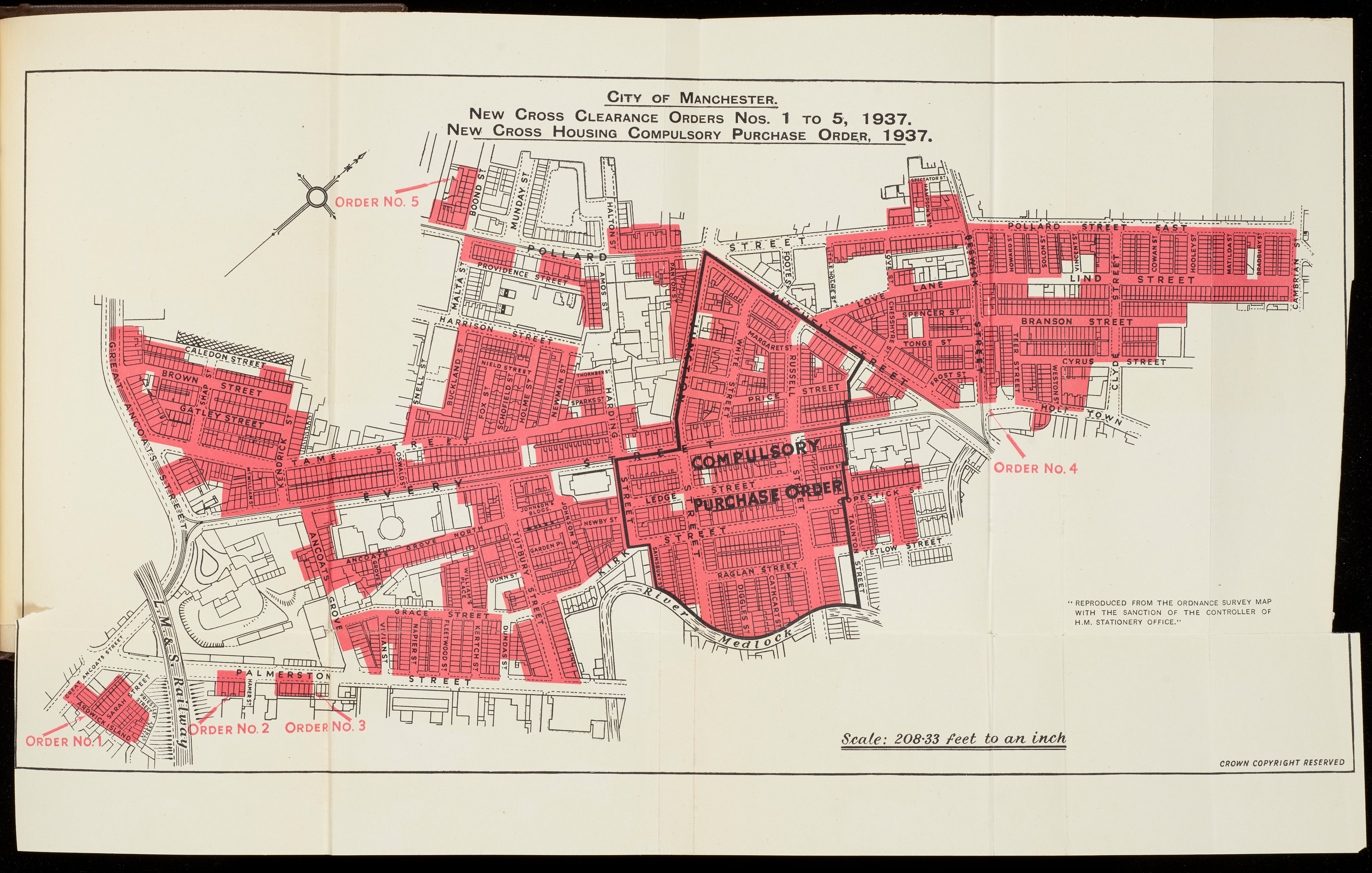 The Library has looked after the archives of Manchester Settlement (formerly Manchester University Settlement) for many years. The Settlement has been active since the 1890s in combating poverty in Manchester.

During a stocktake this summer, we discovered a previously unrecorded collection of Settlement social survey records from the 1930s. These provide an unique and fascinating account of social conditions in inner-city Manchester at the time, as John McCrory describes in this article:

In 1934 a sizeable part of the New Cross ward in Ancoats was condemned for ‘scheduled clearance’ – demolition. Its residents were to be uprooted and transferred to the new municipal housing estates rising elsewhere in the city. Similar clearances continued throughout the decade as Manchester’s worst housing was compulsorily purchased, pulled down and its residents dispersed, whether they wanted to leave or not.

The New Cross ward was also the hinterland of the Manchester University Settlement. The Round House on Every Street, bought in part thanks to a £1,000 donation from Enriqueta Rylands, had acted as its heart for over thirty years, and from there the Settlement had offered an array of services to local residents. It would escape the bulldozers – on this occasion. There was no sentiment shown towards Ancoats’ houses from the Settlement’s Warden, Jean C. Wyatt:

Ancoats houses would go where they belonged – on the rubbish heap. What would happen to Ancoats people?

Yet she noted the prevailing mood among local residents was one of dismay: why? Would their fears about the increased cost of living on the new estates be well founded? Higher rents, longer commutes, less community support and fewer, more expensive shops? An opportunity was found in the upheaval, and plans for a comprehensive survey of the area and its residents were formed.

The Settlement had long taken an interest in the housing conditions of Manchester’s poorest residents, driven by two of its earliest and most influential supporters: T. C. Horsfall, its president for twenty years, and T. R. Marr, a former Warden. It had also recently published a series of pamphlets investigating housing conditions in the city: Social Studies of a Manchester Ward.

But this survey was to be of a different order, much more ambitious in scope. While other reports focused either on housing conditions in the condemned areas, or tenants in the new municipal housing estates, this would cover both: comparing the same tenants’ experiences in Ancoats and again in their new homes. A Survey Committee was formed, chaired by Herbert Fleure, professor of geography at the University of Manchester, with Wyatt acting as its secretary.

The scale of the survey was ambitious in other ways too, aiming for five hundred respondents who would be questioned on the whole of family life. While it was arduous to complete, often requiring multiple visits to each house by Wyatt and her team, we are left with a vivid picture of Ancoats life in the late 1930s. That such details could be coaxed from residents is a testament to the Settlement’s roots in the area.

Nine themes were covered, with each given its own report card in the family’s folder:

The first 100 families approached were known to the Settlement, following which a random sample was chosen from the electoral register – the fourth house on every street – along with chance encounters and introductions made by residents. Not all participants completed every section of the survey: only 226 families provided details about their rent, with 121 giving a breakdown of their expenditure on food.

The report cards we have in the collection were transcribed from the surveyor’s notes back at The Round House. On many of these cards the surveyors left detailed notes elaborating on their findings, noting anything else they thought relevant, and often adding their personal impressions of the families. The inside sleeve of the report for household “54” adds:

Very anxious to be moved. But not to a flat – want garden – all family want a garden – only garden they have is the grave of the baby that died. Grave is in Bradford Cemetery and is “a mass of flowers”. H cycles on Sunday and S.10 says – “Dad nearly always brings a fern home but they won’t grow on our yard –”

Want to move or be moved. Should be watched in case try to move themselves. Disturbed or not very happy. Resent S.6 sickness which they seem to feel could be prevented… Some feeling of resentment against life.

Many families found the process difficult, with disagreement at household “33”:

Husband is definitely antagonistic to this enquiry, and has forbidden his wife to give any information. He says that he has already had the investigator from the Town Hall and that is enough!

Wyatt announced the completion of the first part of the survey in 1938. It had taken nine months, with 476 families co-operating from the 600 approached. Yet the onset of the war in 1939 ended plans for the crucial second part of the survey – following tenants to their new homes – with wartime conditions nullifying any objective comparison. Using the funds allocated for the second part, a survey was commissioned and published into life on the Gorton Mount Estate, a new municipal development of semi-detached ‘cottage’ style housing. How were these new communities, thrust together in their new housing, coping with the transition? A summary of the survey’s findings was eventually published in 1945, Ancoats: a Study of a clearance area.

Writing at the conclusion of the first part of the survey in the Settlement’s 1937–1938 Annual Report, Wyatt noted that while residents’ opinions were not sought as part of the survey, they were freely offered:

While most people welcomed the thought of better houses and baths, they resented the feeling that they were being uprooted by force. Clearance for them is not the demolition of a “scheduled area,” but the destruction of the life that they know. They have no clear idea of the life that will be substituted, and consequently they dread it.

We’ll never know how these families fared in their new homes and communities, but the Ancoats Survey stands as a remarkable snapshot of an inner-city Manchester that was shortly to disappear forever.