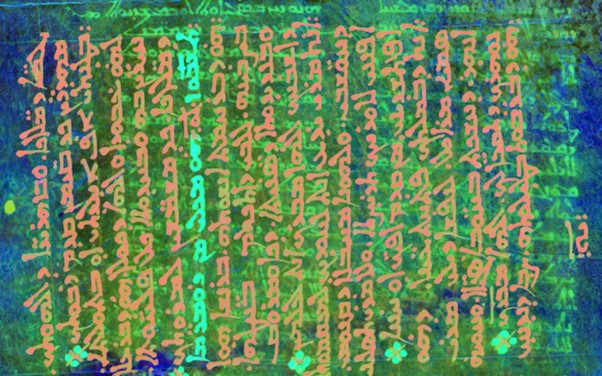 In October 2019, a uniquely important manuscript was loaned to the John Rylands Library for an exhibition entitled Seeing the Invisible. Now known as the Syriac Galen Palimpsest, it is in the ownership of a private collector in the USA. The original medical manuscript contained Galen’s (130-210 CE) Book of Simple Drugs, originally written in Greek, in Syriac translation, probably written in northern Mesopotamia or western Syria between 800 and 850 CE. In the eleventh century, this text was scraped off, and a religious text known as the Octoechos was copied onto the pages, probably at the monastery of Saint Elias near Antioch in the Holy Land. You can read and watch the videos on the link above to tell you all about the context in which both layers of the manuscript were produced and the changing fate of Syriac as a written language from the ninth century up to the present day.

The exhibition came about as a result of the work of the multi-institutional Syriac Galen Palimpsest project, led by Prof. Peter Pormann in the Department of Classics and Ancient History at the University of Manchester. Using cutting-edge technology called multispectral imaging, the aim of the project is to reveal and transcribe the scraped-off Syriac text, which you can see if you look closely at the manuscript.

The exhibition not only contains the palimpsest manuscript, but has also provided a fantastic opportunity to showcase printed and manuscript materials from our Syriac and Arabic collections. I was not involved in setting up the exhibition, but as a historian of medieval medicine and manuscripts expert it is very much in my area of interest and I have visited the display several times. I’d like here to offer some reflections on what this brilliant exhibition tells us about some aspects of medieval culture more broadly.

What and where were the Middle Ages?

Ask someone to imagine a medieval person in their natural habitat and they will most likely picture someone who is white, Christian, in a setting such as a castle or a church, and in Europe. This isn’t surprising – the Euro-centric world we are all born into encourages us to imagine Europe as the centre of the world then as now, with culture, scientific investigation and sophistication happening mainly in this centre, with everything else as an unknown, uncivilised periphery. But this is a complete myth, often weaponised by white supremacists, which we should all be training ourselves to break away from. Seeing the Invisible effortlessly demonstrates that exciting cross-cultural exchange was happening between two non-European languages – Syriac and Arabic – of Western European medical texts – Galen – and Christian liturgy – the Octoechos. The Middle Ages – a period which lasted from c. 500 to c. 1500 CE – was a time when trade, intellectual endeavours, marriage and politico-religious matters took place across and between cultures and religions, not exclusively within them.

As well as what the palimpsest can tell us, the exhibition contains several items from our Syriac and Arabic manuscript collections, and printed items which are related to the palimpsest manuscript in some way. For example, the Herbarum Imagines Vivae, (Medical (pre-1701) Printed Collection 1196) published in Frankfurt in 1535, is a herbal – a book illustrating the different kinds of medicinal plants and their properties – a genre with ancient roots. Many of the ‘simple’ drugs described in the Galenic text are derived from plants.

Similarly, Galen’s On the Usefulness of the Parts of the Body (Arabic MS 809 [780]), is a seventeenth-century copy of an Arabic translation of Galen, made by an East Syrian Christian translator, Hunayn ibn Ishaq al-Ibadi (809-873). It neatly shows us two things: that at the same time as Galenic texts were being translated into Syriac, they were also being translated into Arabic; and that Galenic medical tracts in Arabic were still being copied as late as 1700.

The exhibition also shows off some of the wonderful items in our Syriac collection which are related to the multi-layered palimpsest manuscript, such as a book of the Great Octoechos written in 1449 (MS 6) – directly related to the current text of the palimpsest manuscript. Also on display is a book of amulets from the eighteenth century (MS 52). These two manuscripts, and the others on display from the Syriac collection show the long history of the Syriac language as it enjoyed relative fortune alongside Arabic.

Recycling policies are not an invention of the modern era, and in fact our medieval ancestors were diligent in their inventive reuse of materials – they had to be. Parchment, of which the Syriac Galen Palimpsest is made, is produced from animal skins, and is therefore labour-intensive to make. However, parchment is also durable and reusable. For more context, I recommend Erik Kwakkel’s excellent blog post on the repurposing of medieval books for various uses – some of which are quite inventive!

Therefore, it is quite unremarkable that when the Galenic text was seen as no longer useful or desirable in the monastery where the book had ended up, the contents were scraped off and it was repurposed as a liturgical manuscript. After all, we recycle and reuse things we no longer need, not considering how they might benefit future generations. What is however remarkable is that this manuscript survived – and that cutting-edge techniques have allowed us to recover the text below.

The concept of a monocultural Middle Ages with western Europe at its centre is a fantasy, largely fabricated in the nineteenth century and sometimes weaponised by white supremacists. Seeing the Invisible effortlessly demonstrates how cross-cultural this period was: and moreover, it was a time when tolerance and collaboration across religious, linguistic and national boundaries was often encouraged.