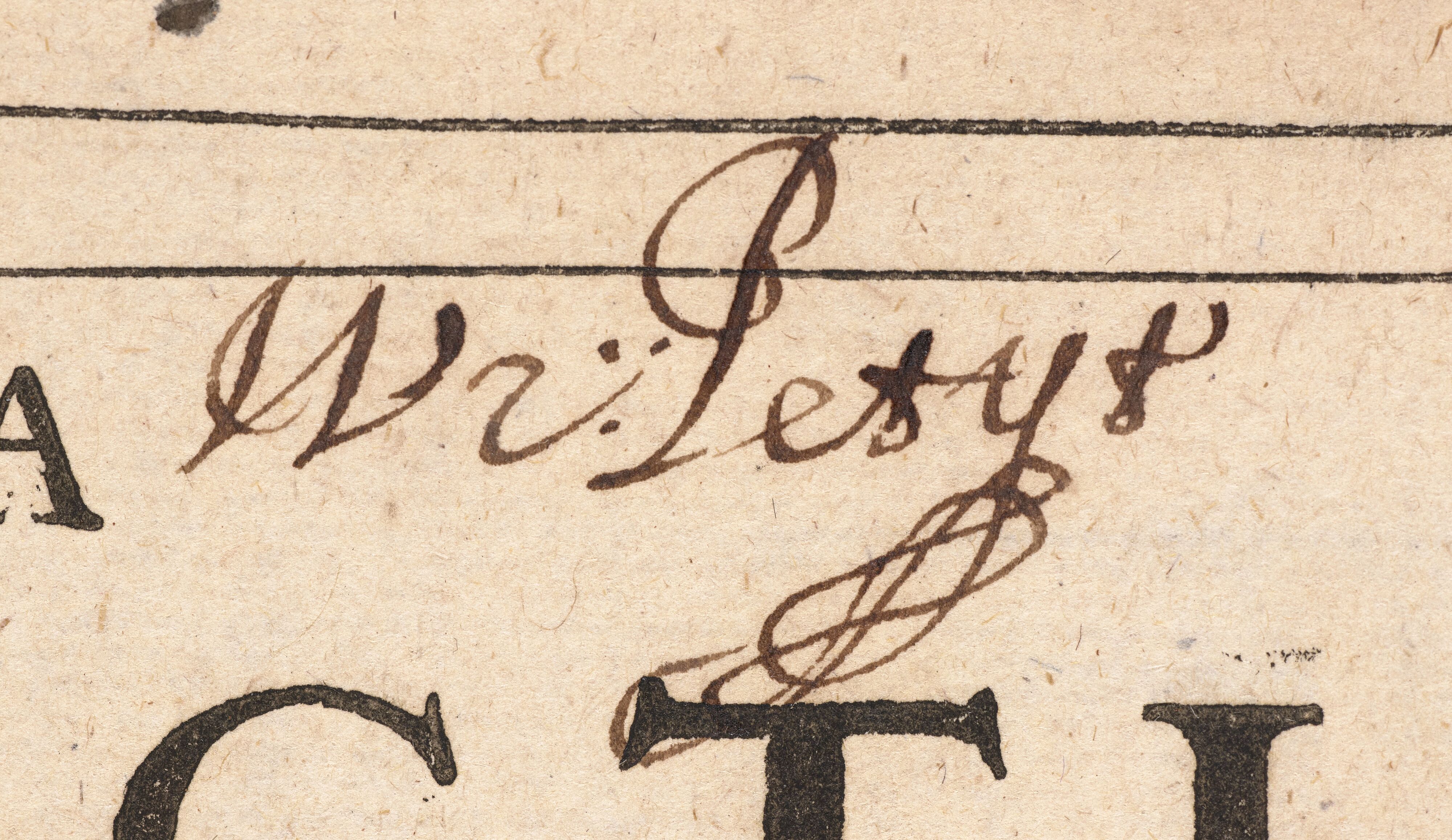 Whilst working in The John Rylands Library for the past four and a half years, I have retrieved for readers a large number of books, archives and manuscripts, dating from all periods of history. I have become used to carefully handling priceless items and viewing the handwriting of royalty, aristocracy, politicians, authors, scientists, theologians, artists, actors, musicians and activists. The thrill of touching something owned by a famous (or infamous) person from the past is one of the many reasons why working in a world-class Special Collections Library is so enjoyable and interesting.

Recently, the Reading Room received a request from a researcher to view a 17th century legal textbook. An order slip was duly filled out, with the reference number and title of the book –

The afternoon before the reader was due to visit, I headed off with a pile of order slips to retrieve requests from all around the Library’s vast storage areas. On locating the said legal volume, I took it off the shelf and looked inside the front cover to check that the reference number correctly matched that on the slip. As I was doing so, the title page fell open and I stared in disbelief as the handwriting of an ancestor – my 8-times great grand-uncle – jumped out at me from the top of the page.

Amazingly, there was the signature of William Petyt, with a distinctive flourish on the ‘y’. In addition, he had also copied out the family motto from our coat of arms ‘Qui s’estime petyt deviendra grand’ which roughly translates as ‘He who calls himself small shall become great’.

William Petyt (1635-1707) was a lawyer, author, antiquary, book collector and archivist, regarded as one the foremost (and controversial) constitutional scholars of the 17th century. Born into a farming family in the village of Bolton Abbey, Yorkshire, he studied at Ermysted’s Grammar School in Skipton before entering the Inns of Court in London to embark upon his legal career. William and his brother Sylvester, an equally successful lawyer and money lender, became movers and shakers in 17th century London society.

A fervent supporter of the Whig cause, William researched parliamentary history and his first book published in 1680 The Ancient Right of the Commons of England Asserted was very influential. As a result of this, after the ‘Glorious Revolution’ King William III appointed him Keeper of the Records in the Tower of London, a post William held from 1689 until his death. This was the forerunner of today’s National Archives at Kew. His imposing portrait is held at the Tower of London.

So how do I know that this is my ancestor? I have heard stories of the Petyt brothers and their rise to fame in London since my childhood. After spending years researching the family tree I have discovered much about William’s life. One defining clue was the stamp of the Inner Temple on the book’s title page. Some of William’s vast personal book collection was bequeathed to the Inner Temple Library and this particular volume was eventually accessioned by The John Rylands Library. To handle a book that William bought, read, and kept at his home in Chelsea was quite moving.

How I came across this discovery is a mystery – with a current estimate of 600,000 Special Collections printed items held throughout the Library, the odds of someone requesting this book and me being the member of staff to retrieve it are astronomical. Perhaps William Petyt wanted me to find it? Serendipity is a wonderful thing!

With thanks to The John Rylands Library’s Imaging team for photography of R131275 and Historic Royal Palaces for permission to use the portrait of William Petyt.