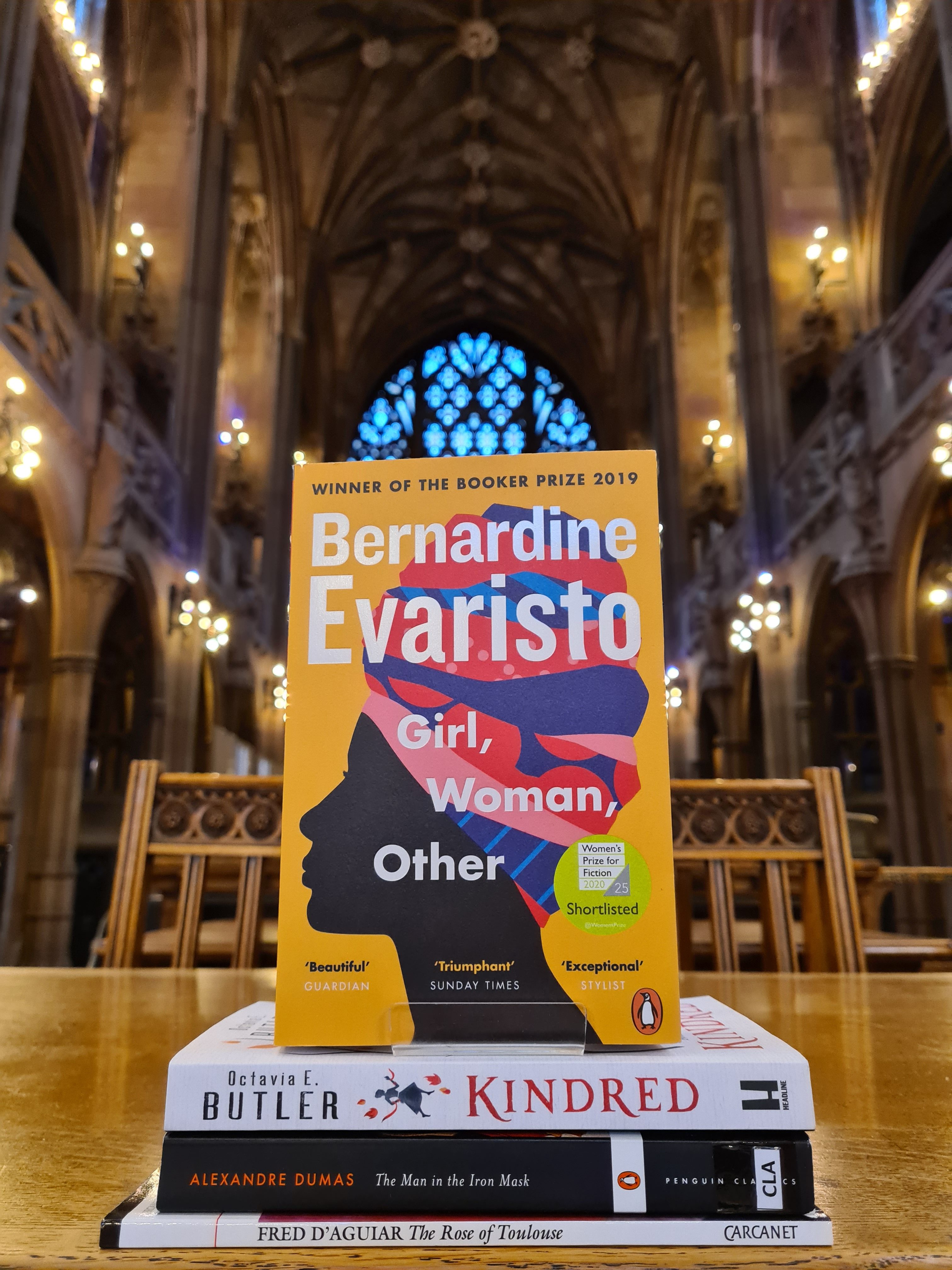 Today’s post is by Caroline Hall and Ruqaiyah Naqshbandi from the Visitor Engagement Team. They are both avid readers, great Googlers and (we hope) okay writers.

Over the past few weeks this blog has shared stories from our collection that celebrate achievements of people of African and Caribbean heritage. As Black History Month comes to a close, we want to do more than mark Black History for a month and then forget until next year. As co-authors of this blog, we’re sharing books we discovered by Black writers while trying to educate ourselves and broaden our knowledge. From literary trailblazers to award-winning writers we’ve got eight amazing writers to share with you. We hope that you are inspired to read at least one of our suggestions and come along on this journey with us.

Let’s start our recommendations with two writers published by Carcanet. The Library holds the physical and digital archives of Carcanet Press, an independent poetry publisher based here in Manchester. Due to the outbreak of COVID-19, we were unable to open our exhibition celebrating 50 years of Carcanet but we’re pleased to share some items from the Carcanet Archive with you here.

Lorna Goodison is a Jamaican born poet who taught art before starting her career as a writer. Initially she kept her writing a secret and published her poetry anonymously in the local newspaper. In an interview with the Guardian, she said, “I’m a poet, but I didn’t choose poetry—it chose me … it’s a dominating, intrusive tyrant. It’s something I have to do—a wicked force.” She has received critical acclaim and in 2017, she was appointed Poet Laureate of Jamaica. Her writing is full of rich imagery that draws on her family and life in Jamaica.

Her poem ‘I Am Becoming My Mother’ resonated with us. We are certain that every woman has uttered this phrase at one point in her life. The repeated line of ‘fingers smelling always of onions’ reminds us of our own way of passing on memories, stories and love.

Fred D’ Aguiar is a Guyanese-British poet, author and playwright. His writing reflects the multitude of identities and cultures he experienced moving between Britain and Guyana and then around the US, saying “home is always elsewhere”. A sense of dislocation runs through his writing, in particular the complex legacy of slavery and colonialism. We’ve selected ‘Excise’ from The Rose of Toulouse. The opening line reflects themes of transformation and evolution in the poem.

Below are more Black writers that you will find either in our Special Collections, in the University of Manchester Main Library or in your local bookshop.

Editor, poet, essayist, novelist and educator, Jessie Redmond Fauset’s work was at the forefront of African-American literature in the 1920s. Her work pushed boundaries by depicting the true life of Black people and the discrimination they faced. As an editor, she encouraged Black writers to include their experiences and culture into their work.

We’d never heard of Jessie before researching this blog. We recommend her books Comedy, American Style, Plum Bun and The Chinaberry Tree.

Alexandre Dumas is one of France’s most famous authors and playwrights. His tales of adventure in The Three Musketeers and the story of revenge in The Count of Monte Cristo have been translated into over 100 languages and made into over 200 films. His father was the son of a French nobleman and enslaved woman of African descent and Dumas’s experience as a mixed-race man influenced his writing. His life was turbulent with money issues and a party lifestyle causing him to move around Europe to avoid creditors.

Get swept away by one of Dumas’s plays, novels or works of non-fiction.

George Lamming is a critically acclaimed author, writer and professor. His debut novel, In the Castle of My Skin, is an autobiographical account of life in 1930s and 1940s Barbados. Touching on subjects of race, colonialism and migration, the book was well received and today Lamming is celebrated for his importance within Caribbean literature.

Pick up a copy of In the Castle of My Skin and let Lamming’s words guide you.

Phillis Wheatley was the first African-American author to publish a book of poetry. Born in West Africa in 1753, she was captured and sold into slavery. Unusually, she was taught to read and write by the family who enslaved her and wrote her first poem at the age of thirteen. Wheatley came to Britain in 1773 to publish an anthology of work, as American publishing houses had refused her writing. The same year her book Poems on Various Subjects was published and received widespread acclaim. Abolitionists used Wheatley’s poetry as evidence of the intellectual abilities of enslaved people. Extracts of her poems ‘Hymn to the Evening’ and ‘Thoughts on Imagination’ were included in The Bow in the Cloud, an anthology intended as literary emancipation propaganda.

Bernardine Evaristo is the first Black woman to win the Booker Prize. She is an advocate for diversity in publishing and is working to make it more inclusive. Her book Girl, Woman, Other is a contemporary look into the lives of women from a diverse range of backgrounds. She tackles relationships, sexuality and gender identity as well as politics and class.

Read Girl, Woman and Other or check out her interviews, which are powerful and compelling.

As avid fans of fantasy and science fiction novels, we wanted to include Octavia E. Butler. The sci-fi genre is often overlooked but Butler’s work has received many accolades. When asked why she chose science fiction she said, “There are no closed doors, no walls… you can look at, examine, play with anything.’’ In her novels, she delves into feminist, race and climate change issues, writing about people and the different ways of being human.

Her book Kindred focuses on time travelling, something Caroline (the co-author of this blog) loves. It tells the story of an aspiring black writer from 1970s L.A. who is transported back in time to a 19th-century plantation to save a young boy’s life. Each time she is transported back and saves his life, she experiences part of the horrors of enslavement. Caroline loved the book so much she recommended it to friends, including Ruqaiyah (the co-author of this blog) who is patiently waiting for her copy to arrive in the post.

If you want to explore more sci-fi stories ‘The Manchester Review’, published by the University of Manchester Centre for New Writing, presents works of African Speculative Fiction in a recent edition: http://www.themanchesterreview.co.uk/?p=8001

This is a personal recommendation list from both of us. There are so many writers of African and Caribbean heritage that we haven’t included because we didn’t want this blog to be too long. A few more recommendations are Toni Morrison, Maya Angelou, Zora Neale Hurston, Andrea Levy and Nikki Giovanni.

We hope you are inspired to try reading a new genre or discover a new author. We would love you to tell us who you will read from the list. Or do you have any recommendations we should read to continue our journey?

0 comments on “Black History Month: Beyond October – A Journey of Discovery”